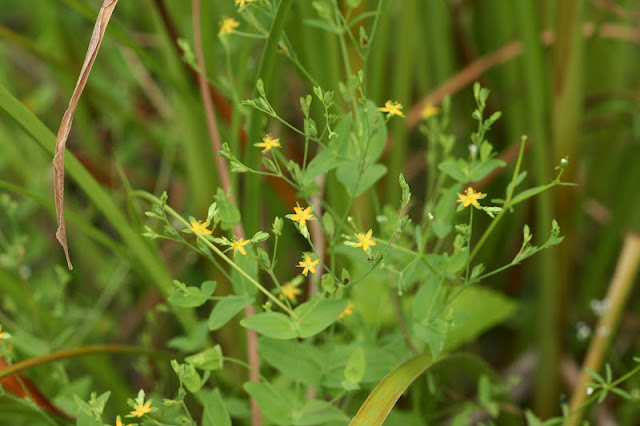 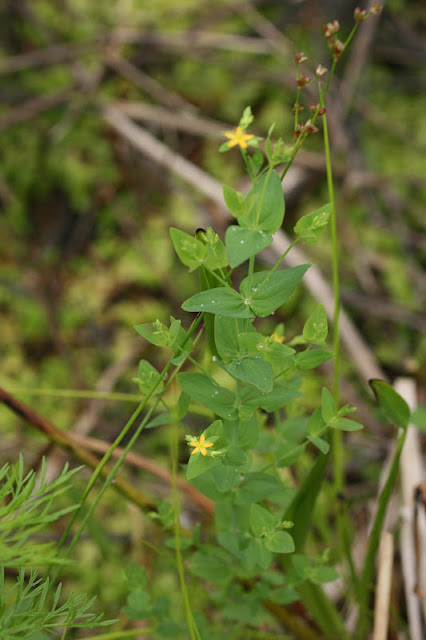 St. Peter's-wort (Hypericum mutilum) may be the most overlooked member of this large genus in Florida. Though the plants themselves are large enough, the tiny yellow flowers are noticeable only on close inspection.  And, when that happens, it is easy to see that this species is, in fact, a St. John's-wort member.
St. Peter's-wort occurs throughout Florida and in nearly every state and province of North America. Throughout this range, it is most frequently encountered in moist, open habitats - the upper edges of marshes and low pockets in pine flatwoods, especially.  St. Peter's-wort is an annual (sometimes a very short-lived perennial), but in Florida it reaches blooming size by late April to early May.  Mature plants are seldom taller than 2 feet and they tend to be rounded in shape - sometimes taller than wide.  The oval leaves are opposite each other on the stem and they clasp the stem. The bark on the lower, more-developed stems is cinnamon colored and peeling.
Like other members of this genus in Florida, the flowers are yellow - a pale lemon yellow instead of a deep canary color.  Each bloom is no more than 1/3 inch across and has 5 petals arranged  in a starlike pattern - not whorled like a pinwheel.  These attract very small pollinators.
St. Peter's-wort is not likely ever to be the subject of landscape interest because of its annual nature and its tiny flowers, but it is an interesting species nevertheless.  Look for it as you hike outdoors anywhere in Florida at the edges between upland and wetland.  If you haven't noticed it before, I bet you will find it if you look for it.
Posted by Hawthorn Hill at 7:11 AM