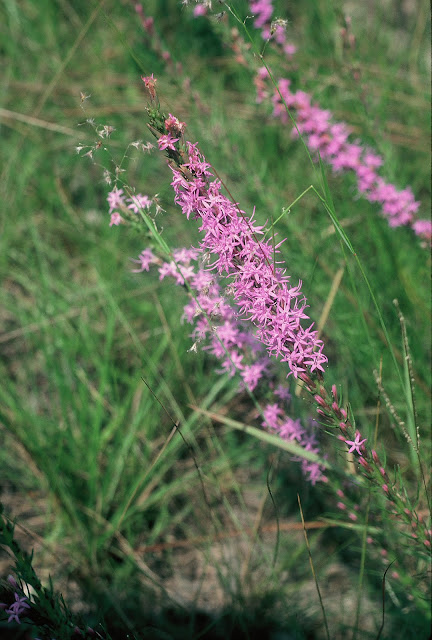 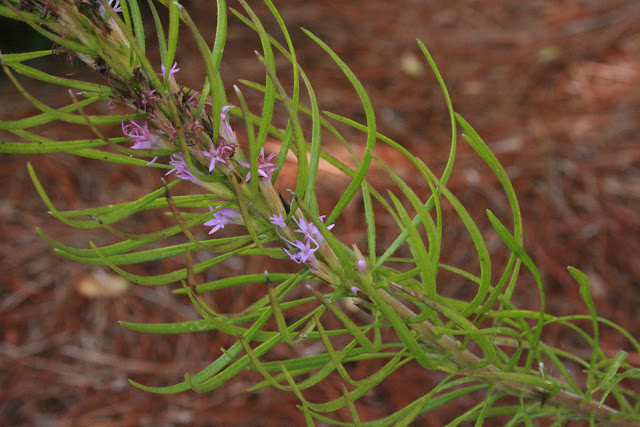 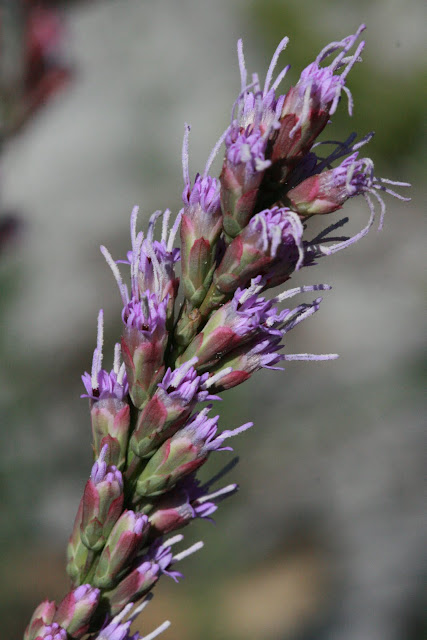 Chapman's blazing star (Liatris chapmanii) is named for one of the Southeast's best known early botanists, A.W. Chapman.  This is another blazing star restricted to the deep sandy soils of Florida and the states immediately adjacent to us - Georgia and Alabama.  In Florida, it occurs nearly statewide in scrub and sandhill habitats.

Chapman's blazing star is rather unique in several ways.  It produces "normal-sized" leaves along the flower stalk - well above the basal rosette, and it produces flowers below the top of the flower stalk into the area where these leaves occur.  For this reason, it is quite easy to distingush from other members of this genus.

Like other members of this genus, Chapman's blazing star is deciduous and makes its appearance in early spring.  The leaves are slightly curved, thin, and about 2-3 inches long.  The basal rosette is dense and has a somewhat whorled appearance.

Blooming begins a bit earlier than many other members of this genus.  Most specimens begin flowering in September and are finished by October. The flower stalks are also a bit shorter and stouter.  Most specimens do not get taller than 3 feet, though they may occassionally reach 4 feet or taller.  The flower buds are densely clustered on the flower stalk and held tightly to it.  Individual flowers are a bright lavender and each bud contains about a half dozen individual flowers.

Chapman's blazing star is a very attractive addition to a mixed wildflower planting, but it absolutely requires well-drained sandy soils to persist.  Soils that hold water around the corm for too long will cause the corms to rot.  Give this species plenty of sunlight also.  Because it is often a bit shorter than other members of this genus and because it blooms earlier, it is best used with other blazing stars and planted in the mid-section of the planting area.  Good companion blazing stars are graceful, elegant, clusterleaf, and scrub blazing star.

Chapman's blazing star is only infrequently offered for sale by member nurseries of AFNN.  It is difficult to maintain in a pot under normal growing practices because it rots if kept too moist.  We have been propagating this wonderful species for several years now at Hawthorn Hill and normally have extra specimens for sale.  Please inquire if you are interested.

Posted by Hawthorn Hill at 7:31 AM