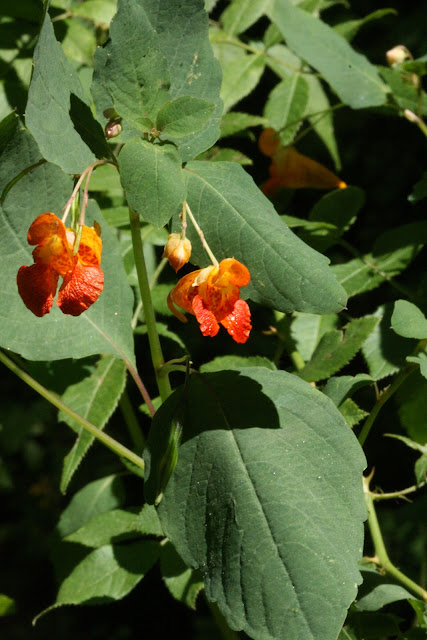 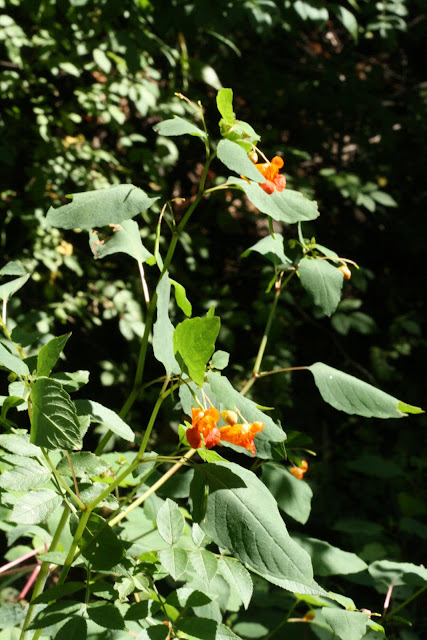 As a Midwesterner by birth, I remember jewelweed (Impatiens capensis) as a common woodland wildflower.  In Florida, it is at the extreme southern limit of its range and occurs only in 2 panhandle counties (Jackson and Liberty) and has been reported also from Volusia Coounty on the east coast.  Though we can claim it as a native plant, it is certainly not a common occurrence in our woodlands like it is in states to our north. Jewelweed (or touch-me-not, as it is sometimes called) occurs throughout nearly all of North America, from the Yukon to Texas and across to the Atlantic.
Jewelweed is an annual. Seedlings emerge in early spring and quicky grow to a mature height of about 3-4 feet.  The stems are succulent (like the non-native impatiens so commonly used in Florida landscapes) and numerous side stems are produced along the main stalk.  Sap from the main stalk relieves the itch of mosquito bites and poison ivy exposure, and recent research has shown that it also has anti-fungal properties that can be used to treat such ailments as athelete's foot.
Jewelweed is a lanky plant, but its broad ovate leaves give it some aesthetic character as a foliage plant.  The blooms, however, are what make it a worthy home landscape plant.  For several months from summer to fall , jewelweed produces large orange flowers along the main stems.  Each has a deep throat and they are of special interest to hummingbirds, bees and butterflies.
In nature, this species occurs in light gaps within deciduous forest habitats, usually in low areas along swales and slow moving creeks.  It cannot take a lot of sunlight nor can it withstand prolonged drought and survive.  In a landscape setting, it should be used as an understory wildflower in moist rich soil, but it should not be used under evergreen trees such as live oaks unless it can get ample sunlight in the late winter and spring.
Jewelweed has never, to my knowledge, been offered by Florida native nurseries, but is is widely propagated to our north.  Because of its annual nature and its restricted growing requirements, it would be a difficult plant to add to most Florida landscapes, but if you reside in north Florida and have the right type of soil and canopy conditions it needs, it might be worth giving it a try.
Posted by Hawthorn Hill at 10:43 AM