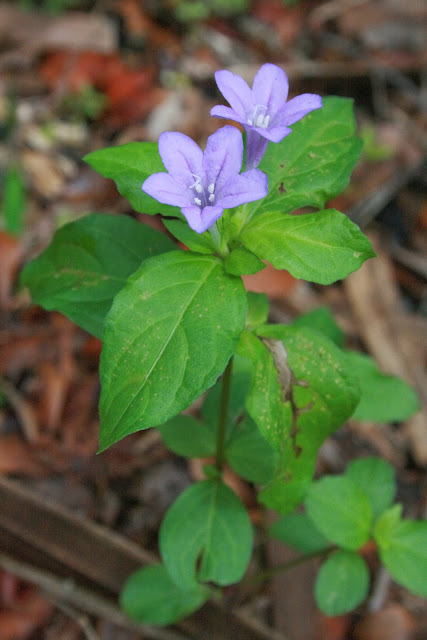 Wild petunia (Ruellia caroliniensis) is a very common wildflower in Florida; found statewide in a variety of habitat types.  It is also distributed throughout the eastern half of North America, though it becomes much more rare in states such as Pennsylvania and New Jersey.  Wild petunia extends its range in the south as far west as Texas.
Though its flowers closely resemble those of the common garden petunia in shape, they are not related.  True petunias are members of the Solanaceae, the family that includes tomatoes, eggplants, potatoes, and nightshades.  Ruellias, the "wild petunias", are members of the Acanthaceae; a family that includes a great many tropical and semi-tropical plants commonly grown in Florida for their flowers - e.g. Justicia and Thunbergia.  The one characteristic that members of this family share is that their ripened seed capsules explode and send the seeds off a good distance away from the parent plant.  Because of this, all Ruellias tend to move around a landscape over time.
Wild petunia is one of the most adaptable and easy to grow wildflowers available to home gardeners in Florida.  Though it is most often encountered in sandy & sunny uplands, it will tolerate a great deal of shade and moisture as well.  I have found it in shady hammocks in nearly saturated soils and in pure sand in exposed scrub.  In the garden, it will grow nearly everywhere, though it will be leggier and bloom less often in shade.
Wild petunia is a long-lived perennial that dies back to the ground each winter.  Its leaves emerge in early spring and it quickly reaches its mature height of about 12-18 inches by late April - early May.  The leaves are ovate and opposite on the stem.  Often, many stems arise from the basal portion near the root mass and the plants develop a nice rounded form.
Blooming occurs almost non-stop from late spring to late summer/early fall.  The trumpet-shaped flowers are about 1 inch across and vary in color from nearly white to a deep purple.  Often, they occur in pairs and they remain open for only one day.  I have found that butterflies relish the nectar from these flowers; in some of my gardens, they have been the top choice among nectar plants.
Wild petunia scatters its seed everywhere in the landscape.  Once established, you will find new plants many feet from their parents, and after several years, you may find them in the front and the back yard - as well as everywhere in between.  Often, this is a good thing.  How many attractive wildflowers in your garden are this easy to propagate?  And, their small size does not make them crowd out larger neighbors.  But, it can be a nuisance to weed them if you are wanting a more formal look.
Wild petunia is one of the most widely propagated wildflowers in Florida and is grown by a great many nurseries affiliated with FANN - the Florida Association of Native Nurseries.  Be careful NOT to purchase the incredibly invasive Mexican wild petunia (R. simplex; syn. R. brittoniana; R. tweediana) pictured below, however.  They are very different plants and Mexican wild petunia... 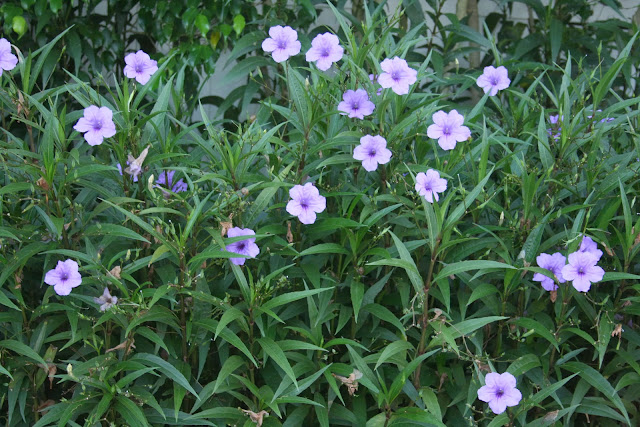 has become extemely problematic to Florida's natural areas.  Mexican wild petunia spreads quickly from underground runners and is nearly impossible to eliminate without the use of herbicides.
Use our native wild petunia in mixed wildflower gardens.  Do not use it in large patches because it is absent in the winter and this will create bare patches of dirt that are unattractive.  Use smaller patches mixed with short grasses such as pinewoods dropseed (Sporobolus junceus) and wiregrass (Aristida spp.) and mix it with short wildflowers that maintain their basal leaves, such as pink penstemon (Penstemon australis).

Posted by Hawthorn Hill at 5:45 AM