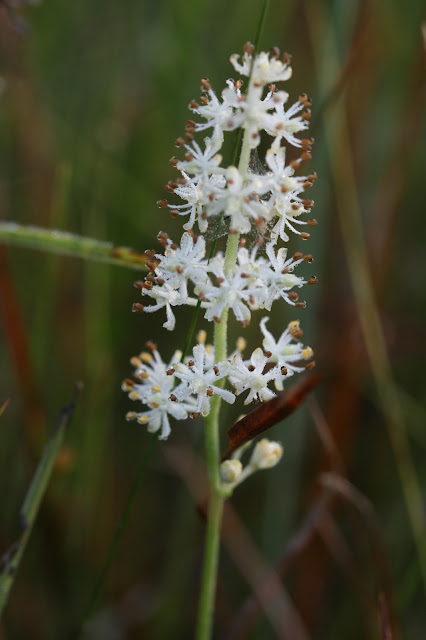 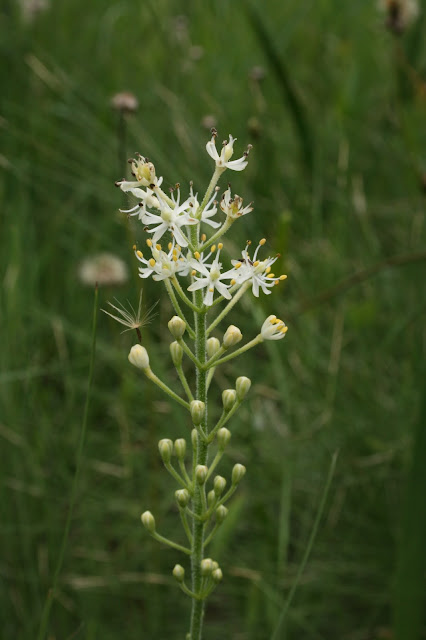 Coastal bog asphodel (Tolfieldia racemosa) is a member of a very small family that also includes the rare endeminc Harper's beauty (Harperocallis flava). Coastal bog asphodel is the only member of this genus native to Florida. It is an obligate wetland plant, found in wet savannas and open bogs across much of the Florida panhandle and in a few counties around the Jacksonville area.  It also is present in most states in the Southeast - from Texas to Maryland.
Coastal bog asphodel is a perennial member of the monocot group of flowering plants and has thin linear basal leaves like many lilies, grasses, and others that comprise this group. It dies back to the ground in winter and produces its basal rosette in early spring.  The flower scape arises from the center of this rosette and reaches its mature height of about 2 feet in early summer. The photos above were taken in mid-June in Apalachicola National Forest in an area that also supported yellow pitcher plants and sundews. The flowers are produced one per node, not in small clusters, and each is comprised of six petals.
This very attractive wildflower is not likely to ever be sold commercially due to its restricted habitat requirements. Look for it during the summer months if you are in open wet prairies in north Florida.  It deserves a close look.
Posted by Hawthorn Hill at 7:43 AM