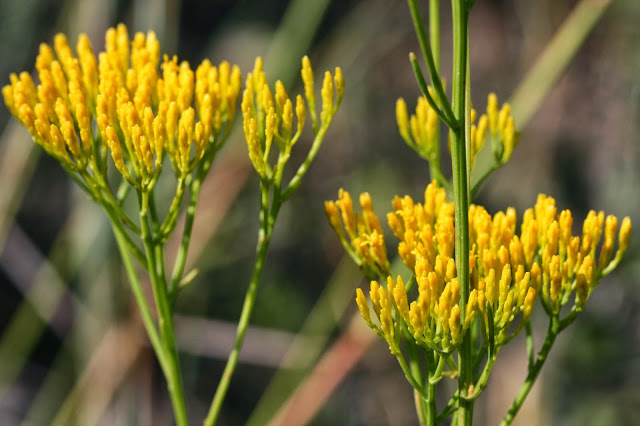 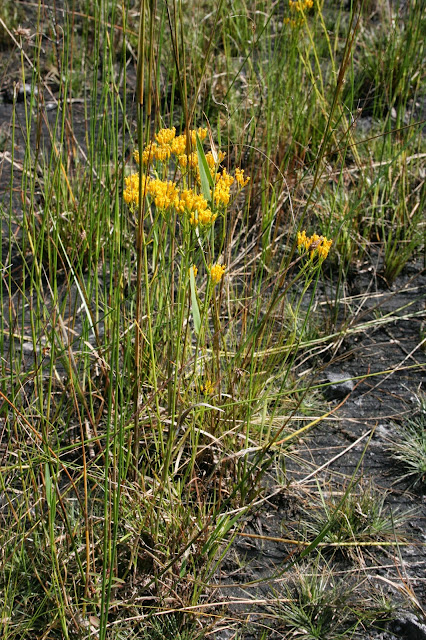 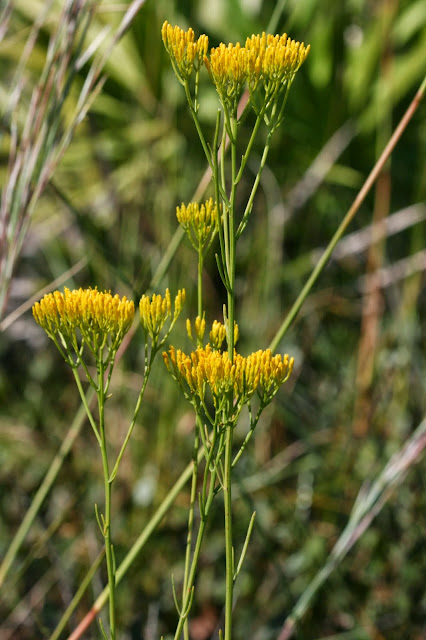 Coastalplain rayless goldenrod (Bigelowia nudata subsp. australis) is the Florida-specific form of a wildflower distributed along the Gulf Coast from Texas to North Carolina.  The australis subspecies is found throughout the Florida peninsula, except in the very extreme southern tip. These are in the Aster family, but are not closely related to the true goldenrods - genus Solidago.
This perennial is a species of wet open habitats. It dies to the ground in winter and emerges each spring.  Strap-like basal leaves, about one inch long, are soon formed, but these are easily overlooked amidst the grasses and other forbs with which it grows. It makes its full appearance in late spring to fall when the thin 1-3 foot tall flower stalks produce their numerous canary yellow blooms.  As its common name implies, the flowers do not have ray petals, like many other asters.  The tubular flowers are packed into flattened heads that look a bit like candelabras.  Plants are often found in colonies, and these are striking during their several-week blooming season.  They also attract the attention of pollinators.
Florida is home to two species of rayless goldenrod. I have posted previously on B. nutallii. The latter species is quite rare in Florida, found only in excessively well-drained sandy habitats, and has leaves that are even narrower than those shown above.
Coastalplain rayless goldenrod would make a beautiful addition to a wet prairie garden, but its need for moist to wet soils precludes its use in most home landscape settings.  it is not currently offered for sale by any nursery associated with FANN - the Florida Association of Native Nurseries.
Posted by Hawthorn Hill at 7:51 AM