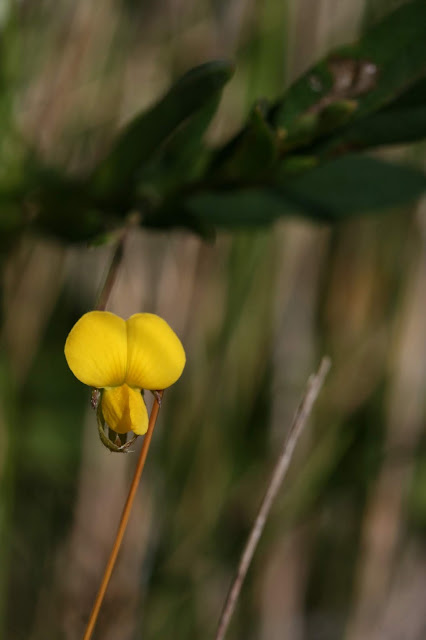 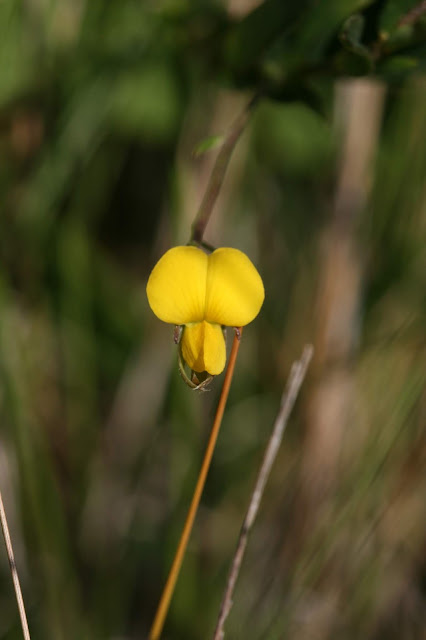 There are a great many beans/legumes native to Florida and quite a few that are not native. It is a widespread family and members can be found in nearly every habitat type found here. Some are difficult for me to tell apart on first glance as they are various shades of pink and light lavender and have the typical 3-parted compound leaf. A few are white, but very few are bright canary yellow. That is the attribute that aids me with this one when I encounter it in the field.
Hairypod cowpea, (Vigna luteola), is essentially found statewide, though it has not been vouchered in the Ocala/Lake Wales Ridge counties and a few in the Panhandle. This may well be an oversight as small, somewhat less-grandiose, species do not seem to be collected as avidly as the showier ones. Besides Florida, it is known throughout the Southeast Coastal Plain from Texas to Virginia and seems to also occur in Pennsylvania. Throughout this extended range, it is most common in mesic open sites.
Hairypod cowpea is a weak-stemmed vining perennial. Its many stems twine through the adjacent vegetation - it does not have tendrils. As it twines, it can partially smother the plants it climbs upon. Normally, its blooms rise an inch or two above the foliage. Both the leaflets and the bean-shaped seed pods are "hairy".
The flowers are bright canary yellow and quite attractive. Like most legumes, the lower petal is fused into a keeled lip and the petals above it are fused into "ears".  Flowering can occur during most months, except winter in the northern half of the state.
Most twining legumes are difficult in a mixed wildflower planting because of their bad behavior and, thus, they are rarely propagated for the home landscape by native nurseries affiliated with FANN - the Florida Association of  Native Nurseries. They tend to have value to the hardcore butterfly gardener, however, and should be made more available because of that. Hairy cowpea is a known larval host plant for the gray hairstreak, dorantes skipper, and long-tailed skipper. Although each of these butterflies also oviposits on other, less rambling species, adding hairy cowpea is useful to a butterfly garden where these three butterflies are to be considered. Finding plants from nurseries may be very difficult so look for the ripening beans during most months, harvest a few before they are completely dry and keep then in a closed paper bag until they split open. Such ripe pods burst open vigorously and you may actually hear them inside the paper bag. Sow the seed just below the soil surface and germination should occur within 2-3 weeks.
Posted by Hawthorn Hill at 2:58 PM