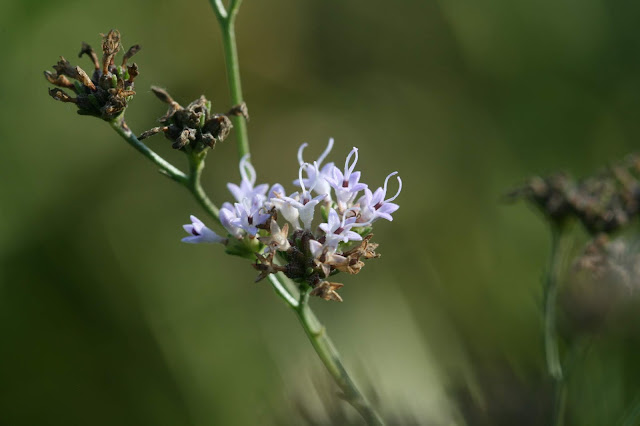 Hartwrightia (Hartwrightia floridana) is a state-threatened species found throughout various counties in north and central Florida, in the central counties and not along either coast. It also is reported in Georgia where it is vouchered from 4 counties in the extreme southeastern corner adjacent to Florida. This is the only species in this genus and a member of the Asteraceae. Throughout its limited range, it is quite specific in its habitat requirements. It occurs in wet open habitats - flatwoods, prairies, and seepage slopes - most often in areas also dominated by cutthroat grass (Coleataenia abscissa).
Hartwrighia emerges in early spring and forms a wide-spreading rosette of basal leaves. These leaves are 6-10 inches long, oval, with noticeable veins. I have posted a photograph below. A flower stem rises from these leaves and eventually reaches 3-4 feet by its fall blooming time. One unique feature of this plant is that its leaves, flower stem and flower buds are covered by noticeably sticky glands.

Flowering occurs on the tall flower stalks in October and into very early November. They occur in small umbels, each containing several dozen individual tubular flowers. The arrangement is quite similar to that of vanilla plant (Carphephorus odoratissimus), but Hartwrightia is a delicate pink in color and quite distinct.
I have not seen pollinators using this species, but suspect it attracts the same types as other aster relatives. It also has never been offered for sale by any of the native plant nurseries I am familiar with. This would be an interesting and beautiful species in the right type of landscape and perhaps it will someday be offered. Although I have not grown it myself, I suspect it would require high levels of sunlight and reliably moist soil.