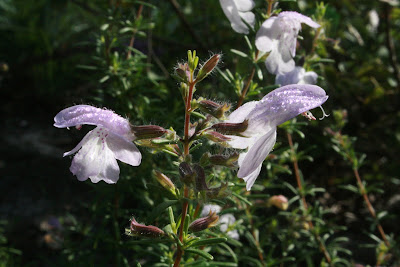 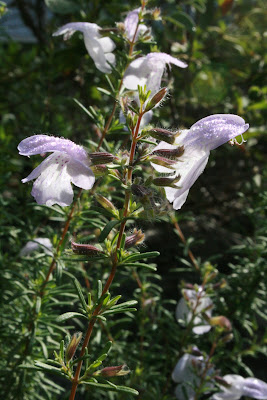 Large-flowered rosemary is a species of the coastal scrubs of central and southern Florida. As such, it is one of just a few endemic species found in the scrubs of this region. Although listed by the state as a Threatened species, it is the most widely distributed of our Conradinas and is found along most of the east coast from Volusia County to Miami-Dade.

Its rarity is really a reflection of the great habitat loss that has occurred throughout Florida's coastal habitats. Because scrubs are well-drained, they were some of the first areas chosen for development. Few of these areas have been preserved, but large-flowered rosemary can be found in most of them.

This species is both robust and beautiful. Mature specimens can reach 4 feet in height, but often are at least a foot shorter. The needle-like foliage is rich green and shiny while the individual leaves tend to be a bit longer and narrower than those found in other species of this genus.

Its common and Latin names come from their large flowers. These are fairly similar in color to those of the wild (C. canescens) and short-leaved (C. brevifolia) rosemaries, but the flowers themselves are nearly twice as large. They also tend to be a bit "floppy". Flowering peaks occur in the spring and fall, and some flowers should be expected anytime in between.

I have grown this species for many years and find it to be a bit forgiving when compared to the others. They still need good drainage and high levels of sunlight, but they can often thrive in soils that are not pure scrub sand.

Give this species good drainage and water it enough to get it well established. Once this occurs, it is relatively easy to maintain. Because of its size, it is best planted near the center of a mixed wildflower bed. Large-flowered rosemary is frequently available from native plant nurseries. Give it a try if you have an area of deeply sandy soils and plenty of sunshine.