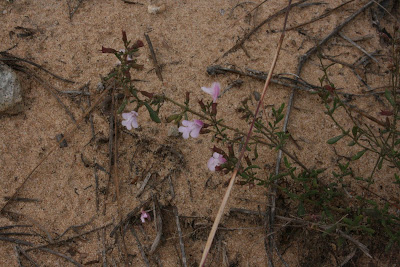 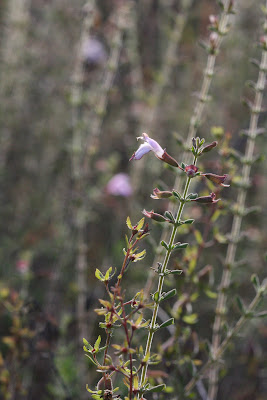 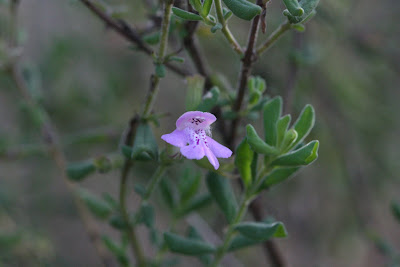 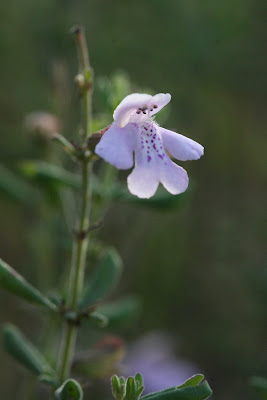 Toothed savory (Calamintha dentata) is another member of this wonderful genus. Unlike the red basil (C. coccinea), however, this is a very rare plant reported only from 8 counties in the north-central Panhandle of Florida and from Georgia. The Georgia records are not well documented and the species is likely no longer present there. The Florida population is listed as "Threatened" by the state.
Toothed savory occurs in excessively well-drained yellow sands and fares best in full to mostly full sun. In areas where it occurs, it is fairly common. Its just that it does not find that many areas suitable...
Well-grown specimens may be several feet tall, but it is often seen at less than 18 inches. Its common and Latin names come from the small "teeth" at the edge of the leaf tip. These are not especially easy to see at first glance though as the leaves are rather small and they curl under.
Overall, this is not an especially impressive wildflower. The stems are thin and brittle, the leaves are widely spaced and tiny and, when they are crushed or brushed against, they emit a somewhat unpleasant minty fragrance. What makes this plant most notable (besides that fact that it is quite interesting) is its blooms. Like many other members of this genus, the flowers are a pale lavendar, spotted in the center, and beautiful. Although somewhat small in stature, they appear in profusion during the fall blooming season. Flowers can be found during most months between spring and late fall, but I have found the peak of blooming to occur in late summer and early fall.
Florida is blessed with a large number of interesting and beautiful wildflowers found nowhere else in the world. Many, like the toothed savory, have extremely narrow natural ranges and restricted habitat needs. We can "savor" these species in the wild and take satisfaction that there are conservation biologists and land managers working hard to preserve them. Toothed savory is not offered commercially at this time and it may never make a good choice for the home landscape.

Posted by Hawthorn Hill at 7:25 AM