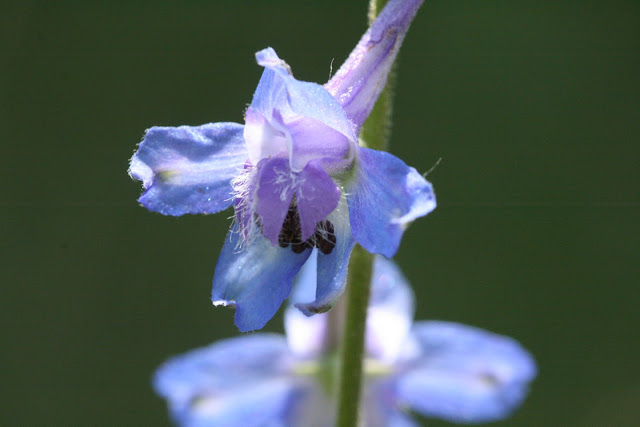 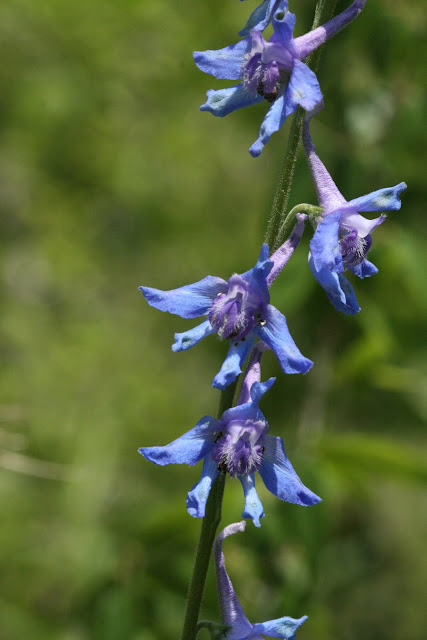 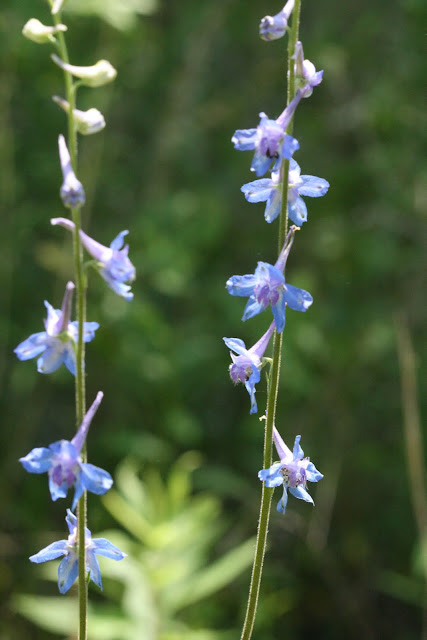 Carolina larkspur (Delphinium carolinianum) is one of many Florida rarities (it is a state-listed endangered species) and certainly one of its most beautiful. It also is another example of a relict species still found here from an earlier age, growing in a confined location where its growing needs are still met.  In Florida, its population is confined to a relatively small area of Gadsden County, near the Georgia border.  Here, it occurs in mostly open sunny conditions growing in well-drained alkaline soils.  But, it is widely distributed in states to our north and west and occurs north all the way to Manitoba Province in Canada.
Carolina larkspur is a deciduous perennial which makes its appearance in early spring.  A basal cluster of deeply dissected leaves is soon followed by a flower stalk.  By late April, this stalk has reached its mature height of 18-36 inches.  Flowering occurs from late April through May in most years.  The spurred flowers are a wonderfully beautiful sky blue in color with the central portion of the corolla being purplish blue.  The flowers open on the bottom of the stalk first and proceed towards the tip.  These blooms are mostly bee pollinated.
Carolina larkspur is not likely to ever become a widely planted member of the wildflower garden in Florida, though it is popular in other states.  Its limited range in Florida would suggest that it may be difficult to meet its growing requirements here, but other narrowly distributed wildflowers such as wild columbine (Aquilegia canadensis) are successfully grown well beyond their native distribution.  So, the verdict is out and a bit of experimentation seems to be needed.
This species has recently been offered for sale in limited numbers by Trillium Gardens in Tallahassee, a member of AFNN - the Association of Florida Native Nurseries.  It is seemingly easy to grow from seed, and we at Hawthorn Hill will hopefully be giving that a try from the plants we purchased recently.  If you are interested in using this plant in a native wildflower setting, provide it with half sun and plant it in well-drained sandy soils.  Though it occurs in alkaline soils in Florida, it is tolerant of a wide range of pH in other parts of its range.  This wildflower should be planted in mass (at least five plants per cluster) to give it some effect in the landscape.  Good companion plants would be eastern smooth beardtongue (Pentemon laevigatus), American wild carrot (Daucus pusillus), and several of the milkweeds (Asclepias spp.) and black-eyed susans (Rudbeckia spp.).
Plants of the genus Delphinium contain toxins, and no parts of them should ever be eaten. They can be fatally poisonous to both humans and animals. Sensitivity to a toxin varies with a person’s age, weight, physical condition, and individual susceptibility. Children are most vulnerable because of their curiosity and small size.
Posted by Hawthorn Hill at 6:00 AM