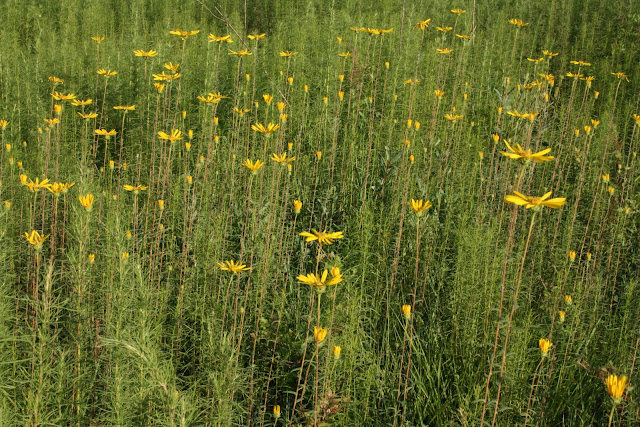 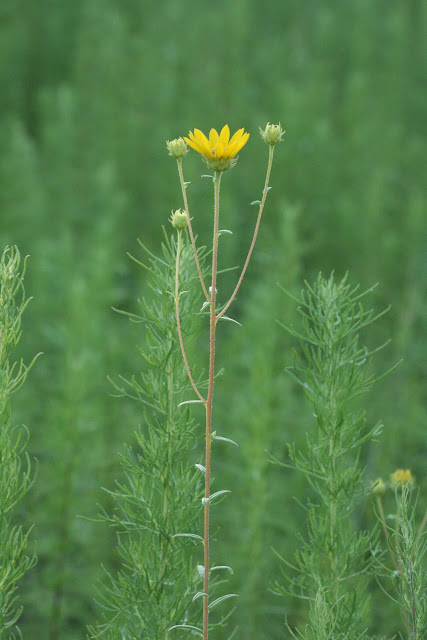 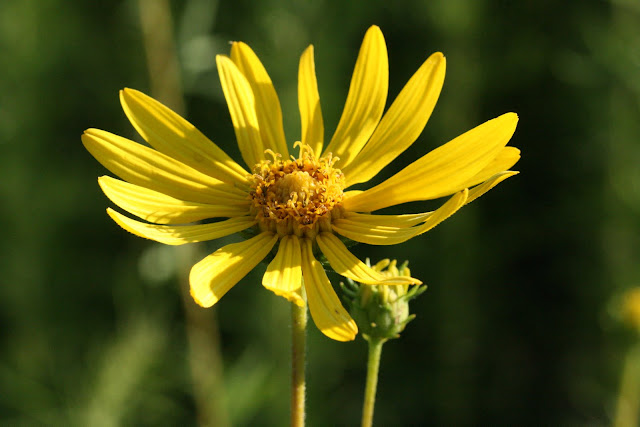 Phoebanthus (Phoebanthus grandiflorus) is endemic to Florida and one of only two species in this genus of aster-like plants.  The other species, P. tenuifolius, has narrower leaves and is also endemic to Florida (though reported once from one Alabama county).  Sometimes called "Florida false sunflower", this is a deciduous perennial wildflower with no basal leaves; tall, thin and rough wiry stems; and wide flat flower heads.  It occurs in well-drained sunny habitats in north and central Florida.  It has not been reported in the panhandle or in the extreme southern peninsula.
Phoebanthus emerges in the early spring and quickly develops its thin wand-like stem.  By June, it has reached its mature height of  about 3 feet.  A flower bud develops atop the main stem and a few short side branches near the top of the main stem.
Flowering occurs between June and July.  Each head is composed of bright yellow ray flowers surrounding a rather flat central disc of yellow disc flowers.  Flower heads may be as broad as 3 1/2 inches and are quite showy.  They are of great interest to butterflies and bees.
Like many members of the aster family, phoebanthus suckers from its underground rhizome and after some years forms a colony.  This enhances its landscape value as phoebanthus looks its best when used in clusters.  Individuals are rather thin and get lost in the landscape by themselves.
Use this plant in open sunny areas with well-drained soil near the middle to back section of a mixed wildflower planting.  Plant at least 5 individuals per cluster and space them at least 6 inches apart to give them some space to sucker and fill in.  Because phoebanthus blooms earlier than most wildflowers; especially other asters, use it in combination with other summer-blooming species.  Good choices are red salvia and common skullcap.
Despite the general interest shown to native aster-family species by the commercial trade, neither phoebanthus is currently offered by nurseries associated with AFNN - the Association of Florida Native  Nurseries.  This seems a bit odd to me considering its versatility and its attractiveness.  Perhaps with renewed interest in using native wildflowers, more attention will be given to this Florida endemic and its endemic panhandle cousin.
Posted by Hawthorn Hill at 9:52 AM