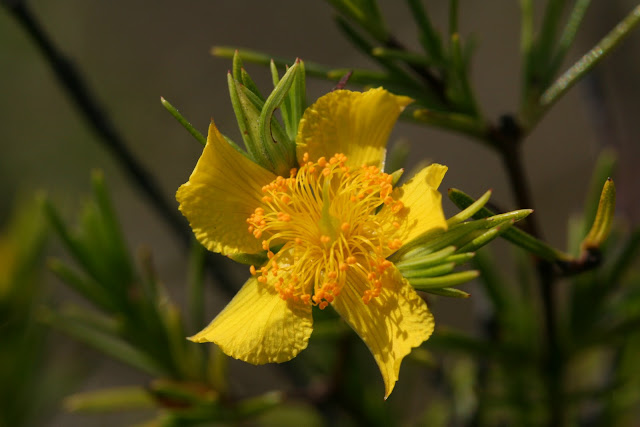 Coastalplain St. John's-wort (Hypericum brachyphyllum) occurs statewide on stream banks, pond margins, and wet savannas and pine flatwoods.  It is a Southeastern species that occurs only in the Deep South. It is an erect perennial evergreen shrub that reaches a mature height of about 4 feet.  Florida is home to 31 separate species of St. John's-worts and they can be difficult sometimes for the average person to differentiate.  The first key should always be habitat.  Many, like coastalplain St. John's-wort, are wetland species that rarely stray too far from wet or saturated soil.  The second is leaf shape. Coastalplain St. John's-wort has thin, needle-like leaves that are strongly revolute - the leaf margins are rolled backwards. The third is the number of petals. Most, like this species, have 5.  The fourth is the overall aspect of the plant.  Coastalplain St. John's-wort forms a round, dense bush that is somewhat uniform.
This is a common species to wet habitats.  In these habitats, it may be most confused with sandweed (H. fasciculatum); the latter being differentiated by its somewhat taller and irregular stature and its needle-like leaves that do not roll backwards along the margin. Sandweed also often develops reddish peeling bark - and prop roots when it grows in flooded situations.
Coastalplain St. John's-wort is an attractive member of this widespread genus, but has never been propagated as far I as I am aware by anyone associated with FANN - the Florida Association of Native Nurseries.  Its rounded evergreen aspect and bright yellow flowers have great aesthetic appeal, but it requires moist to wet soil to prosper.  Use it along the edges of wet to permanently flooded habitats, but near edges where its smaller size will not get lost.
We do not propagate this species at Hawthorn Hill.
Posted by Hawthorn Hill at 2:53 PM