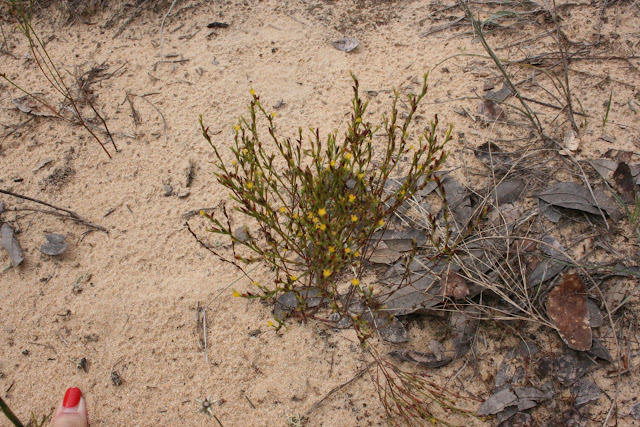 Pineweed (Hypericum gentianoides) is another small St. John's-wort. Though it sometimes stands 18 inches high, it is a wispy plant with greatly reduced foliage and flowers that rarely are as much as 1/8 inches across. Pineweed occurs in deep well-drained sands throughout most of Florida and in well-drained uplands across most of eastern North America into Ontario. It is an annual forb and relies on its abundant seed crop to persist over time.
Pineweed does not look much like a St. John's-wort when not in bloom.  The single main stem gives rise to multiple brushy stems about 6 inches above the ground and gives the plant an almost bottlebrush appearance.  The leaves are greatly reduced and scale-like.
Flowering occurs across the tops of the multiple stems in summer.  The petals are lemon yellow in color and each flower is composed of 5 petals.  They are not arranged in a whorl as are those in Highlands scrub St. John's-wort (H. cumulicola).
I have grown this species in my home landscape, but have not had much success with keeping it long term. Because of its annual nature, it would require well-drained sandy soils with sufficient open space for its seed to germinate in each spring.  In the landscape, this species is an interesting curiosity - not especially showy even in bloom, but intriguing when planted in small clusters and mixed with other small wildflowers near the front of the planting bed.
Look closely for it when hiking in open habitats during the summer.  You may have overlooked it in the past or not realized that it is a St. John's-wort.  Recognizing it for what it is, makes it a bit more special.
Posted by Hawthorn Hill at 9:17 AM