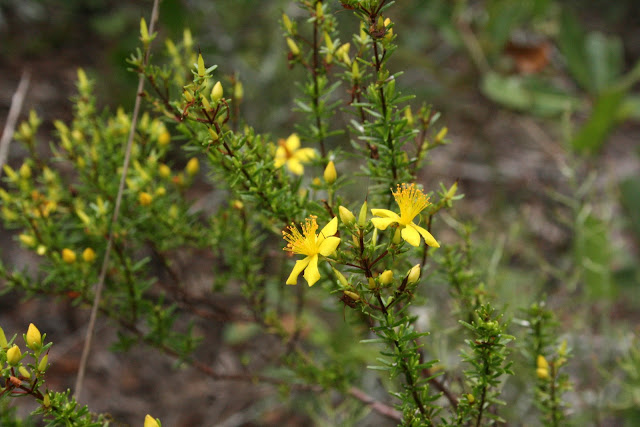 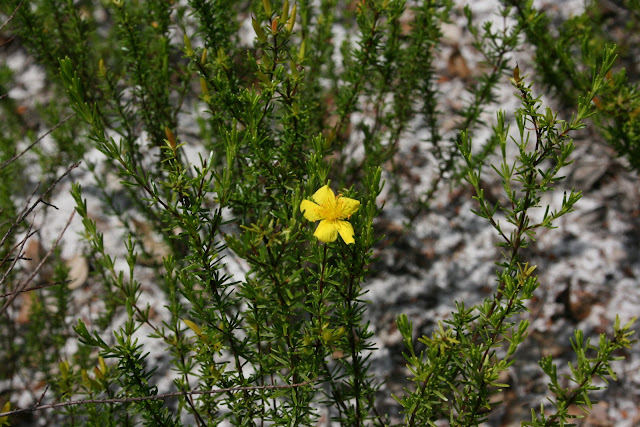 Scrub St. John's-wort (Hypericum tenuifolium) is a beautiful evergreen woody wildflower and perhaps the one St. John's-wort most widely grown for home landscapes in Florida.  It occurs throughout most of Florida in excessively well-drained sandy habitats - scrub and sandhill - and in similar habitats in most of the Southeastern Coastal Plain.
Scrub St. John's-wort is an attractive foliage plant.  Mature specimens rarely stand taller than about 18 inches, but they remain round and dense.  The multiple reddish brown stems are densely covered with shiny deep-green needle-like leaves.  These are somewhat reminiscent of coastalplain St. John's-wort (H. brachyphyllum) but the leaves do not fold upwards as they do in the latter and the two species occur in very different habitat types.
Flowering can occur in most months, but is most common in late spring and early summer.  The deep yellow, five-petal flowers arise at the ends of the many stems and plants in full bloom can have more than a dozen flowers open at any one time.
Scrub St. John's-wort is widely propagated by nurseries affiliated with FANN - the Florida Association of Native Nurseries, and is normally an easy species to find and purchase.  We do not propagate it for that reason at Hawthorn Hill, but we have grown it in our landscape for many years.  This species is extremely drought tolerant, but also unforgiving of soils that remain wet for too long.  Use it in well-drained sands and give it plenty of sun.  Because of its small stature, it looks best when used in the front portion of the planting area and I like to use it in small clusters of 3-5 plants.  I have not found individual plants to be very long-lived, so plan to replace them every 3-5 years.
Posted by Hawthorn Hill at 9:39 AM