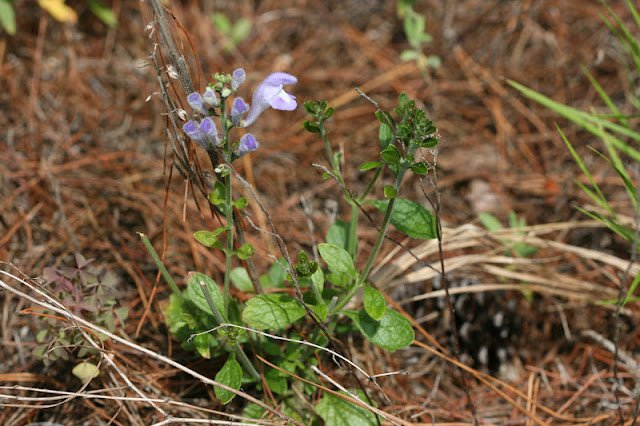 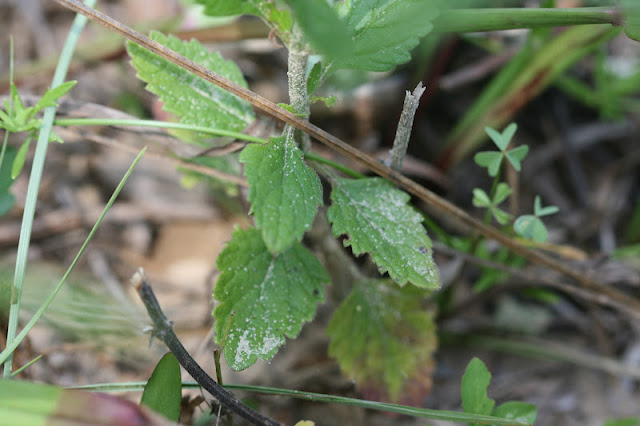 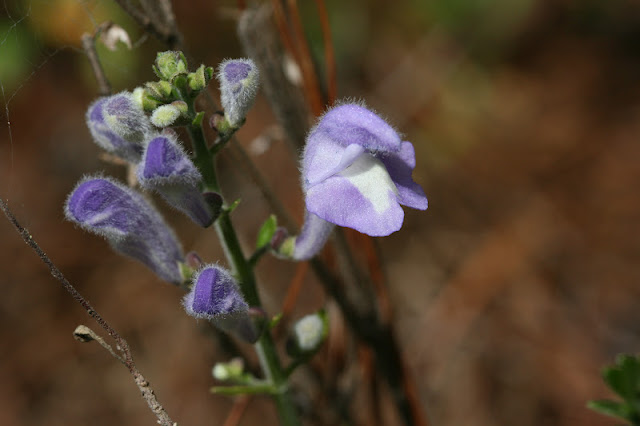 Florida scrub skullcap (Scutellaria arenicola) is nearly endemic to well-drained sandy habitats in peninsular Florida and a few north Florida counties near Jacksonville, though it has been reported in parts of Georgia.  And, despite its common name, it may be more frequent in sandhills than in scrub or other other upland habitat types.
Skullcaps can sometimes be a bit difficult to tell apart from each other and this species can look somewhat like helmet skullcap (S. integrifolia) - a species that is widely sold in the trade.  These two species rarely grow side-by-side, however. Florida scrub skullcap is more confined to the most well-drained sandhills and scrubs. Look also at the leaves as they ascend the main stem.  Both species have deltoid lower leaves with teeth along the margins, but in S. integrifolia, these teeth tend to disappear on leaves further up the stem.  They remain on all the leaves of S. arenicola.
Florida scrub skullcap is a perennial forb that often overwinters as a basal rosette of arrow-shaped leaves. These leaves tend to become more linear in shape as they ascend the stem, but all leaves retain teeth along the margins and are pubescent on the upper surface. Plants quickly reach a mature height of about 8-12 inches by late June and then begin flowering at the end of the main stem.  Older plants produce multiple rosettes so they produce multiple flowering stalks. A well-grown, mature plant may have half a dozen flowering stalks. These flowers are present in late June into mid July.
Like others in this genus, the blooms are a lavender blue in color with a distinct helmet shape. The lower petal has a large white patch that serves as a nectar guide and the surfaceof the petals are "hairy." My friend and accomplished wildflower expert, Rufino Osorio, mentions in his plant blog that he has never seen this plant attract pollinators, but I expect it attracts the same types of bumble bees that my other native skullcaps lure.  I will soon find that out as we have recently added this to the list of species here at Hawthorn Hill.
Skullcaps are wonderful additions to mixed wildflower gardens, but they can spread more than desired both by seed and by underground rhizomes.  We regularly have to weed out our unwanted S. integrifolia and I suspect the same would be true for this species if its growing conditions are well met.  Rufino writes that Florida scrub skullcap tolerates a wide variety of soils and is surprisingly tolerant of high moisture for short periods if the soil is well-drained.
For some reason, this species has never been widely propagated and is not currently available from anyone associated with FANN - the Florida Association of Native Nurseries. This is regrettable as this species has showy blooms and is relatively easy to care for.  If we succeed with it here at Hawthorn Hill, we hope to be able to offer it to others in the near future.
Posted by Hawthorn Hill at 4:56 PM