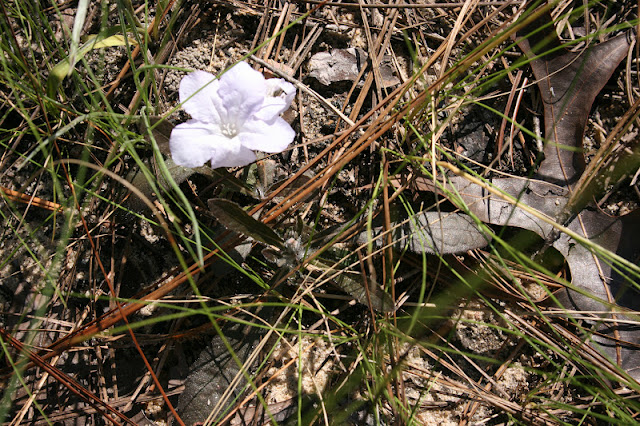 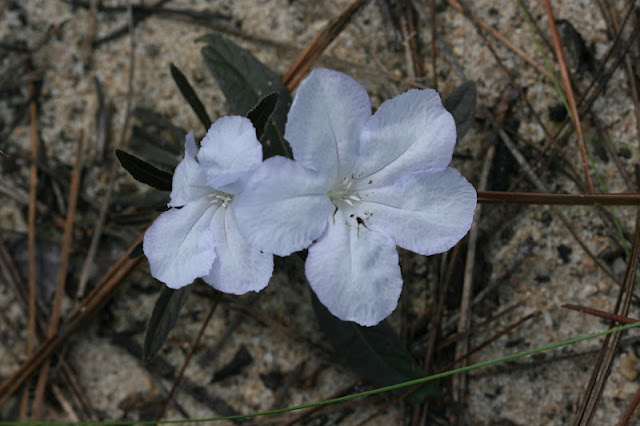 Ciliate wild petunia (Ruellia ciliosa) is another species with some taxonomic discrepencies.  Wunderlin and Hansen list it as a distinct species, but many others consider it merely a subspecies of the common wild petunia (R. caroliniensis).  In my humble opinion, it seems distinct enough to warrant species status.
Regardless, it occurs throughout much of north and central Florida in xeric open habitats - with a record also from Lee County in southwest Florida. Outside the state, it has been reported from Texas to North Carolina.
Ciliate wild petunia tends to grow close to the ground.  Its foliage often consists of little other than a rosette of basal leaves, and as the Latin and common names indicate, the leaves are covered with noticeable hairs.  They are also commonly purplish in color, not green as in R. caroliniensis.
Flowering occurs from late spring through fall.  Like its close relative, they remain open for only a day before wilting. They are also the same size (about 1 inch in diameter). What separates them is that the color is nearly always very pale - almost white. Even with the flowers open, plants are rarely more than 3-4 inches tall.
Ciliate wild petunia has never been listed commercially by FANN, the Florida Association of Native Nurseries, in the 20+ years I have been active in Florida plants, but I have run across it from time to time in batches of typical wild petunia being sold.  It seems to be more touchy than its more-common relative to growing conditions; persisting best if given well-drained sandy soils and high light levels.
Look for it as you hike Florida's sandhills and xeric flatwoods, but it may be difficult to find once the day's flowers have wilted in the afternoon.

Posted by Hawthorn Hill at 8:39 PM