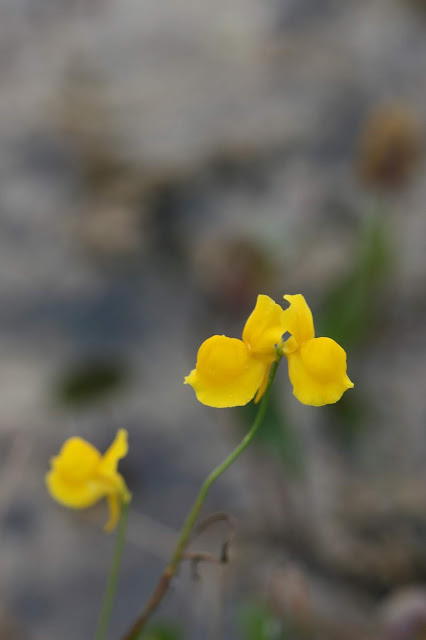 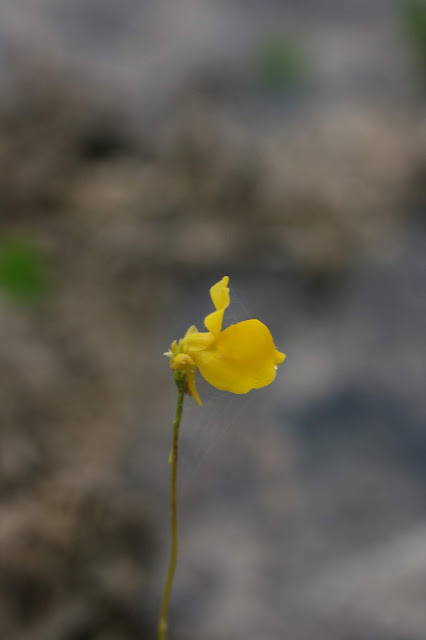 Horned bladderwort (Utricularia cornuta) is yet another yellow-flowered bladderwort that roots itself in the substrate instead of floating on the water surface.In many respects, it is quite similar to one I've already posted - U. junceus. Both have "horns" below the bright yellow blooms and both have noticeable "humps" in the lower petal.  The major difference between the two is in the length of the horn-like spur. In U. juncea, the spur is rarely longer than 6 mm, while in U. cornuta the spur is normally longer - up to 14 mm.
Horned bladderwort is common in Florida's wet habitats and it tends to flower during the wetter rainy season. It is reported statewide and in nearly every state and Canadian Province in the eastern half of North America. There are scattered reports in some states and provinces west of this region as well.
Horned bladderwort shares the same ecological attributes of others I've previously written about. They are semi-carnivorous and use their tiny bladders to supplement their diet with small invertebrates.
Look for this species and others in this genus once the summer rainy season floods shallow open pond edges and in wet prairies and marshes.
Posted by Hawthorn Hill at 12:08 PM