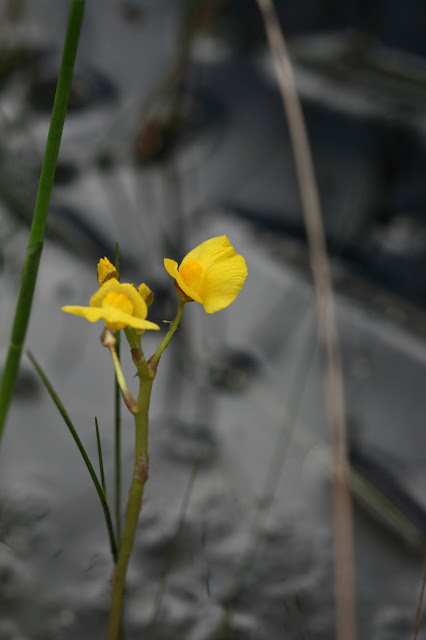 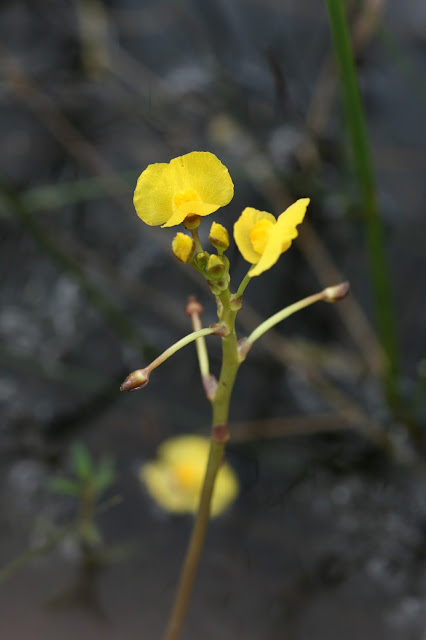 Bladderworts are very interesting species as they are semi-carnivorous and augment their diet by using tiny bladders near their roots to capture even smaller invertebrates such as insects and nematodes.  Humped bladderwort (Utricularia gibba) is one of 10 yellow-flowered species native to Florida. It is found statewide in shallowly flooded open habitats such as pond edges and also is reported from every state in the eastern half of the US and from all of those states along the west coast as well.
Humped bladderwort is one that is rooted in the wet substrate instead of one that floats in the water column. The leaves are not very substantial and the 6-inch or so flower stalk emerges during the summer rainy season. Several bright yellow flowers occur along the top of this stem. Unlike most others, these small yellow flowers are held at an almost-45-degree angle. This is the best characteristic to distinguish it from other similar yellow-flowered species.
As bladderworts have little commercial interest, they are species to be admired when out in the field. Look for this one in seasonally and shallowly flooded areas at the edge of ponds and open wet prairies and marshes.
Posted by Hawthorn Hill at 11:44 AM