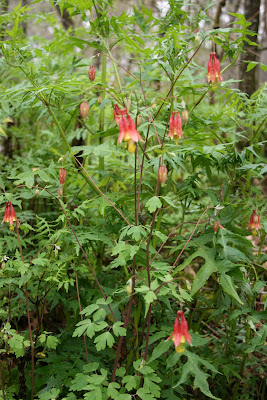 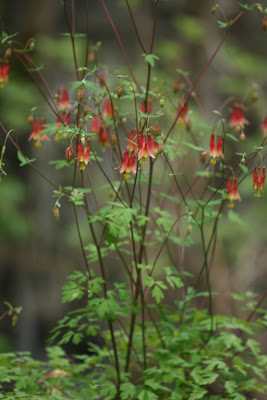 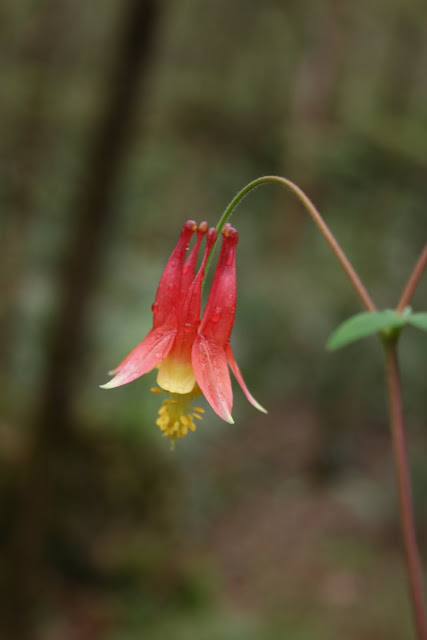 Columbine (Aquilegia canadensis) is one of the most beloved of all wildflowers and widely planted throughout much of its natural range in North America - from southern Canada to nearly every state in the eastern half of the U.S. In Florida, however, it is exceedingly rare and occurs only in a few calcareous deciduous woodlands in and around Florida Caverns State Park in the central panhandle.  In areas where it occurs naturally, it can be quite common, but it has a very narrow range of ecological tolerances.  Foremost, it seems to need high pH, sandy woodland soils overlying limerock.  Secondly, it seems to require sun in very early spring, followed by dappled light the rest of the year.  Lastly, it seems to need some protection from the heat of summer.
Despite all of this, columbine can be grown in Florida landscapes quite successfully outside its natural range.  We have grown it in our Pinellas County landscape for a number of years, but we have taken a few precautions to give it conditions as near as possible to those found around Florida Caverns State Park.  We have sited it near the foundation of our house to give it a higher pH than the rest of our yard offers.  We grow it at the edge of our deciduous woodland garden and we make sure it gets a bit of extra moisture during periods of extreme drought.
Columbine is a very short-lived perennial.  It should not be expected to live much past 2-3 years and will not persist in a landscape if it doesn't reproduce.  Thankfully, well grown individuals produce large numbers of tiny black seeds.  If you trust your site, you may wish to let some of them sow naturally.  I am not that trusting, so I collect the seed to sow in flats.  Seedlings emerge quickly after sowing and are usually easy to grow.
Blooming may not occur until the second year.  Columbine is deciduous and the entire plant disappears from late fall until late winter/early spring.  Growth is rapid and mature specimens reach a height of 2 1/2 to nearly 4 feet tall by blooming time - March through May.  The feathery foliage is one of its best features, looking a bit like a maidenhair fern.  The most attractive feature of this wildflower, however, is its flowers.  Large bright orange to reddish flowers with a contrasting yellow interior are produced singly on arching stalks over a period of many weeks.  They are distinctive in appearance, with 5 modified petals and upright "horns" which hold large quantities of nectar.  Columbines are favorite nectar sources of our ruby-throated humminbird, but also are pollinated by various long-tongued moths and a few bees and butterflies.
If you have a place for this species, you may well wish to give it a try.  It is propagated by a number of commercial sources.  Just realize that you will have to either keep propagating it yourself or purchase it again every 2-3 years to keep it present.
Posted by Hawthorn Hill at 2:41 PM