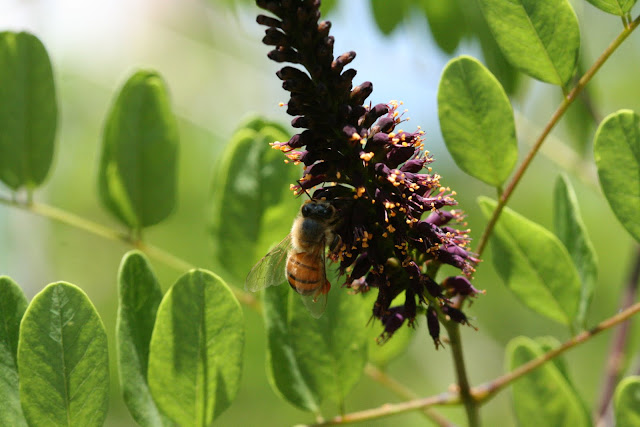 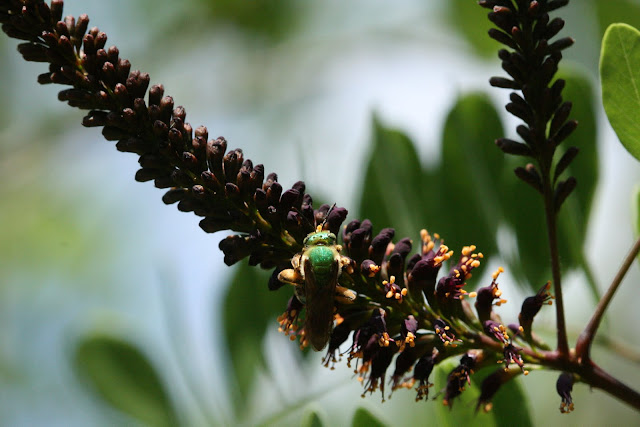 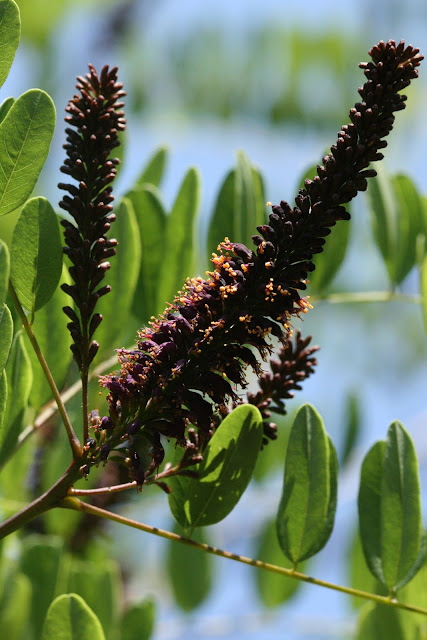 False (or bastard) indigo (Amorpha fruticosa) is another member of the legume family that provides wonderful color as well as some value to a butterfly garden.  It is widely distributed in Florida; having been recorded in nearly every county statewide, and it occurs in nearly every state and province in North America.
False indigo is a wetland plant in nature.  It occurs most frequently near the upper edges of riverine and other freshwater wetlands, where it receives ample soil mositure and at least a half day of sun.  It is extremely adaptable, however, and can be grown quite successfully in most upland settings except those with excessively well-drained soils.  It does well in full sun and blooms much heavier if not given too much shade.
This plant eventually gets quite large and shrublike.  It is not uncommon to find well-grown specimens that have reached 10 feet tall.  Because it also is multi-trunked, its diameter may reach 6 feet or more as well.  So, give it plenty of room if you are considering adding it to your landscape.
False indigo is deciduous and loses its leaves from late fall until mid-spring.  The feathery compound leaves are attractive.  Shortly after they appear, large numbers of flower spikes burst forth across the tops of its many branches.  Each is a raceme 1-2 inches long, densely crowded with the showy purple flowers.  Each flower is deep purple in color with contrasting anthers that are a golden yellow.  Its this contrast that makes them especially showy.  Flowering starts at the stem end of the raceme and works its way towards the tip over about a 2 week period.
The flowers of this species are somewhat fragrant and attract a wide assortment of bees, butterflies, and other pollinators.  It also serves as the larval food plant for the southern dogface sulphur and silver-spotted skipper butterflies.  Once flowering is finished, the pollinated flowers ripen to small dry seeds that are eaten by a variety of doves and other seed-eating birds.
False indigo is available from a variety of commercial nurseries, including a few that are associated with AFNN - the Association of Florida Native Nurseries.  We have grown it for years in our landscape at Hawthorn Hill, but do not propagate it at this time.  It is very easy to grow from seed, however, and grows quickly to flowering size.
False indigo is very adaptable. Use it as a focal/anchor point in the landscape and give it some room.  Although it can be maintained as a single trunk shrub, I like it best when it is allowed to form multiple stems.  Mature specimens do not create too much shade, so many other wildflower and/or native grass species can be planted beneath it.  I like to think of this species as Florida's "butterfly bush" as it has many of the same qualities as a Buddleia, and performs much better here - at least in the southern half of the state.
Posted by Hawthorn Hill at 5:42 AM