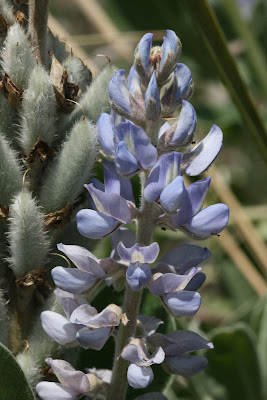 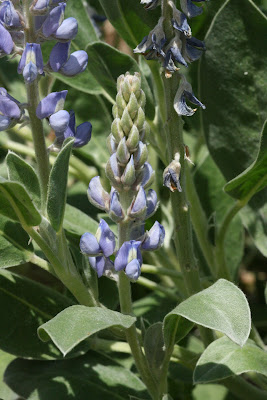 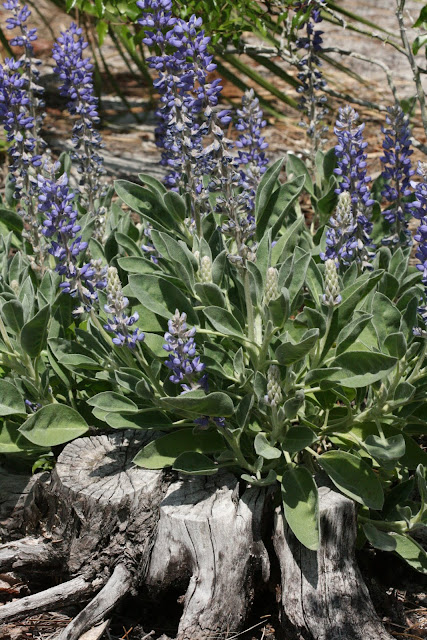 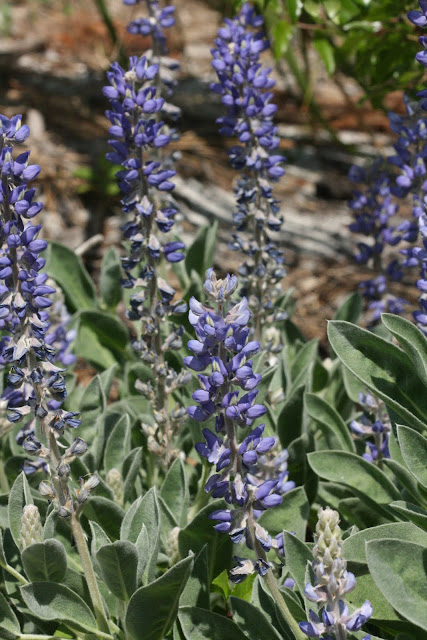 Sky blue lupine (Lupinus diffusus) is one of Florida's most beautiful wildflowers.  It is found nearly statewide in sandy well-drained uplands and in our neighboring states throughout the Deep South.  It is extremely sensitive to growing conditions and its distribution is restricted only to those areas with the proper soils and high light.  It also responds quickly to soil disturbances and prescribed fire.  Its seed can lie dormant for years waiting to be released.  When this happens, large areas can become dominated by this lupine - for a few years.
Sky blue lupine is a very short-lived perennial.  From my experience, it rarely lives beyond about three years after germination.  The first year is spent as a non-flowering seedling while a few flowers occur in year two.  In the third year, individual plants may be several feet across and up to two feet tall.  At this size (as those plants pictured above), the entire plant seems to be covered in sky blue flowers.  Most of these plants, set large numbers of seed and then die by fall.
Sky blue lupine is unique among our native lupines.  Although most have lanceolate leaves covered by silky hairs, others tend to have pink or deep purple blooms.  The foliage is evergreen, though it often is eaten by moth caterpillars and may almost disappear for times due to this.  Flowering occurs in February through March.
As beautiful as this wildflower is, sky blue lupine is unlikely to be offered in the trade to home gardeners.  It is exceedingly difficult to grow in pots, for one.  Though I have worked with this plant for years and get most seeds to germinate, very few live past the first leaf phase.  Those that do, do not do well in pots for very long and need to be transplanted into the garden.  At this stage, most simply die as they "hate" to be moved.  But, I have had some that lived, flowered and produced seed - and these were magnificent.  If you have the right soil for lupines, and you love them as much as I do, you may wish to frustrate yourself with one of Florida's greatest wildflower gardening challenges...  If you succeed, the effort will be well worth it and if you don't, you will join countless others.  At least you will have company.
Posted by Hawthorn Hill at 3:44 PM