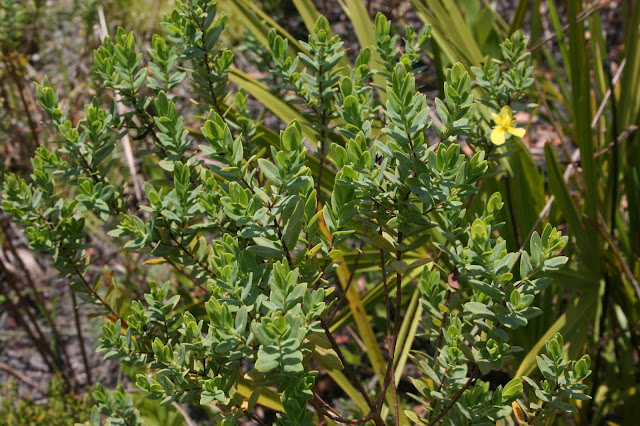 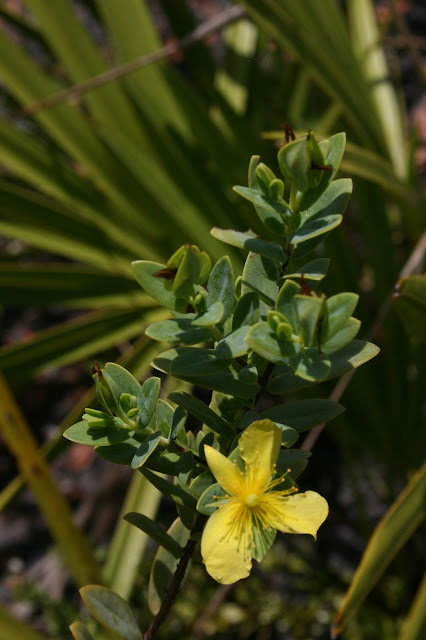 Edison's St. John's-wort (Hypericum edisonianum) is a very rare endemic, listed as a state endangered species, and found principally in seasonably wet marsh edges within the Lake Wales Ridge. It also has been reported in Collier County.
This is an erect woody species that forms a multi-branched evergreen shrub up to 5 feet tall.  Each stem is rather thin, and the dark, silvery black bark is smooth and tight - not reddish and flaky like so many other tall St. John's-worts in Florida.  The thickened oval blue-green leaves are clustered at the ends of the stems. The upper surface is waxy in appearance and each leaf is held at a 45-degree angle from the stem.
The 4-petal flowers are canary yellow and produced mostly in the summer. The plants above were photographed at Archbold Biological Station in late June.  Like other members of this genus, the blooms are showy and attract a variety of pollinators - mostly bees. Pollinated flowers ripen to dark brown capsules.
Edison's St. John's-wort has only rarely been offered for sale commercially during my 25 years living in Florida. It's large size and narrow habitat requirements limit its use in the home landscape. Other, more common species would make better landscape choices in nearly every situation except possible restoration projects within its natural geographic range. This is simply an interesting and beautiful wildflower to be admired when encountered.
Posted by Hawthorn Hill at 11:42 AM