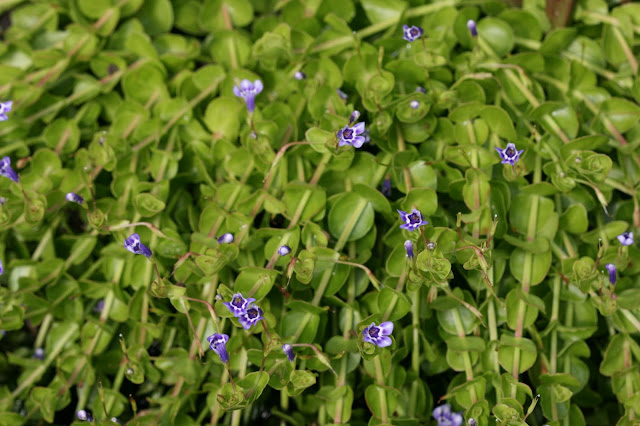 False pimpernel (Lindernia grandiflora) is one of Florida's ubiquitous wetland ground covers - occurring in nearly every moist- to wet-soil habitat in the state (except the central and western Panhandle). It is also reported from parts of Georgia. Like the Bacopa spp. and Browne's savory (Clinopodium brownei), it is a mat-forming ground cover that roots periodically at the nodes and creeps across the landscape.
Like Bacopa spp., the thin stems and oval leaves are succulent in appearance. They are opposite each other on the stem and without a petiole (sessile).  This species rarely stands taller than 6-8 inches.  It is an annual, dying in the early winter and recovering in spring from the copious seed left in the seed bank.  The foliage is not aromatic - making it seem nearly identical to water hyssop (Bacopa monnieri).
What makes this species unique are its flowers.  The flowers have three distinct lower petals larger than the two short upper ones.  They are lavender to purple in color and surround a tubular throat that is deeper purple, surrounded by white.markings.  These tiny blooms can occur from spring to fall, are not paired, and have a short stalk attaching them to the stem.  Small pollinators are attracted to them also.
False pimpernel performs best when given wet soil conditions, though it has tolerance of short-term drought. Because it's an annual, it requires open soil to reseed well and is not the best candidate to use on a moist slope or bank for erosion control. It mixes well, however, with other creeping perennials such as Bacopa, and it can be an effective plant for a hanging pot - though annual in nature.  False pimpernel is not currently propagated by any of the nurseries affiliated with FANN - the Florida Association of Native Nurseries.
Posted by Hawthorn Hill at 9:09 AM