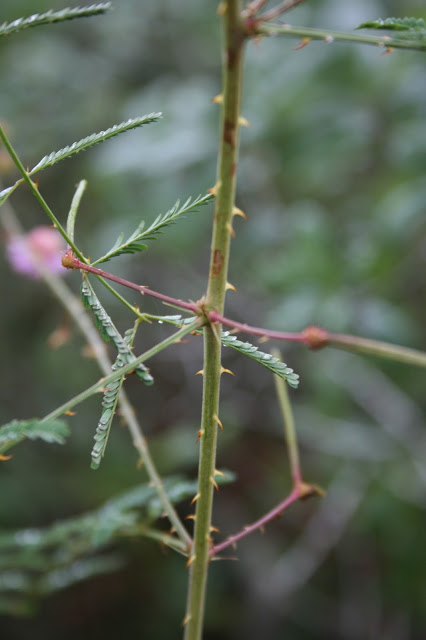 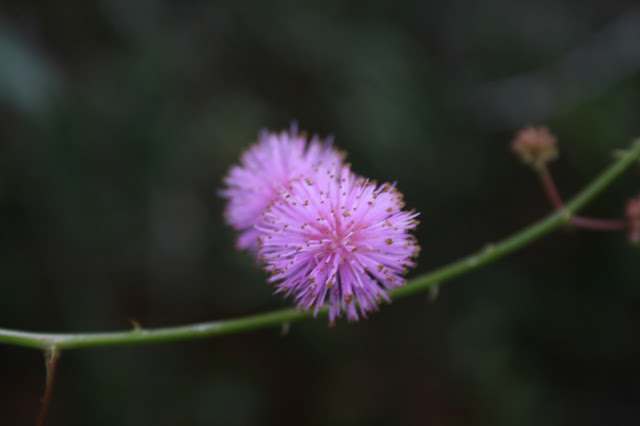 Sensitive briar (Mimosa quadrivalvis) was formerly known as Schrankia microphylla. Its recent taxonomic change reflects its close relationship with sunshine mimosa (Mimosa strigillosa) - a plant it is sometimes confused with.  Two varieties of sensitive briar are recognized, but the differences are minute. The variety above (M. quadrivalvis var. floridana) has noticeable lateral leaf veins on the lower surface of its pinnately compound leaves. The other does not. Both varieties have identical geographic ranges and occur throughout Florida. This species also is present in much of the South to Texas and in southern Illinois. It can be found in a variety of upland habitats. The plants photographed above were found at Archbold Biological Station in scrub. The folded condition of its leaves belies its sensitivity to touch - a result of light rain that was falling.
Sensitive briar is a sprawling nearly woody perennial vine that rambles through the foliage of its neighbors. It is not a ground cover like sunshine mimosa, but it is equally rambling and difficult to control in a landscape.  It also is covered by recurved thorns. These thorns are present along the length of the stems and on the leaf petioles.  Though small in size, they nevertheless find a way to hook into your skin or clothes as you pass by... The leaflets are compound and small in size and linear in shape. The presence of a "pulvinus" at the attachment point on the stem generates an electrical pulse that causes the leaflets to fold if touched. Most botanists believe this to be a deterrent to herbivory as it makes the leaves look smaller and less attractive as food.
Flowers are typical of other mimosa species. They are produced nearly year round in pairs along the stems. Though small (only ~1/4 inch across), they are very attractive. Very small pollinators nectar from them.  It is not reported to be a larval host for the Little Yellow butterfly, as is sunshine mimosa.
Sensitive briar is a plant that can be encountered in a wide variety of upland settings throughout Florida. It can often be found in bloom as well. Just give it a bit of distance to avoid being scratched or hooked.
Posted by Hawthorn Hill at 7:46 AM