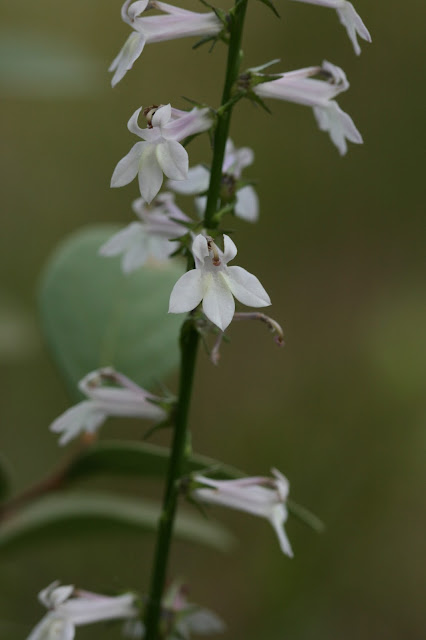 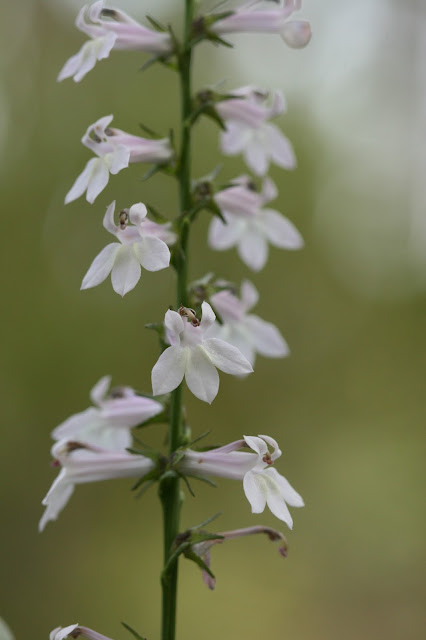 Florida lobelia (Lobelia floridana) is an herbaceous perennial wildflower native to wet marshes and savannas throughout the central and western Florida Panhandle. It also occurs throughout much of the Southeast Coastal Plain from Texas to North Carolina. It has not been reported from South Carolina, however. This is an obligate wetland species that dies back to the ground in winter. When it emerges in the early spring, it forms a whirl of lanceolate basal leaves that exude a milky sap if wounded.
Flowering can occur from late spring to early fall. The 3-5 foot tall flowering stalk has few leaves. The flowers are typically shaped for the genus - they are bilabiate (two lips) - the lower lip is broad and composed of three petals while the upper two petals are much smaller and curve backwards. These petals are fused into a tube which holds the nectar that attracts a diversity of pollinators. Each bloom is white, but with a rose-colored blush
Florida lobelia has not been propagated commercially by nurseries associated with FANN - the Florida Association of Native Nurseries. Though a perennial, like some of its widely grown relatives, its understated beauty seemingly has limited its commercial appeal. I suspect it would be easy to grow from seed collected when the capsules ripen to brown. Sow the seed on top of the soil and make sure it stays moist. To maintain it in a landscape, it would have to be placed in a wet sunny location.
Posted by Hawthorn Hill at 7:39 AM