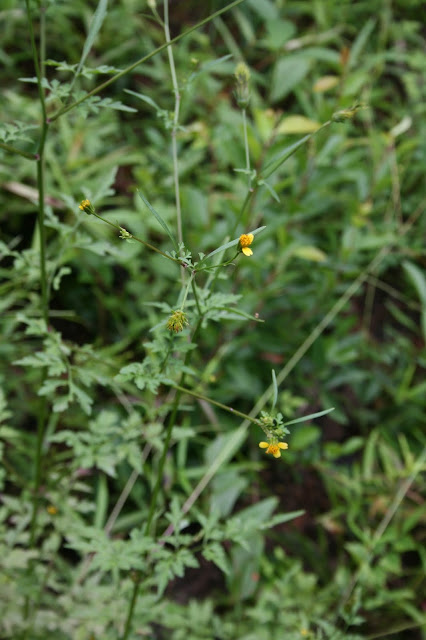 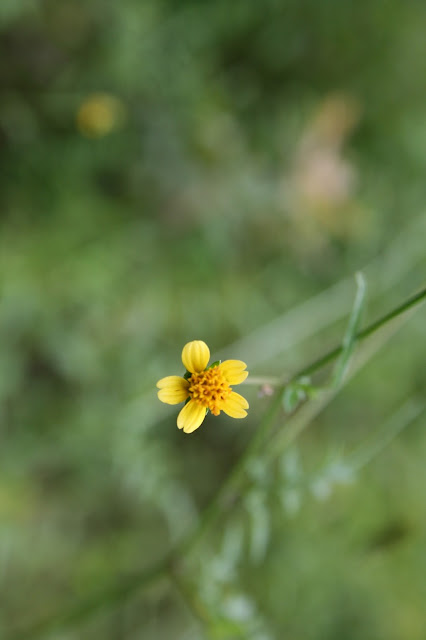 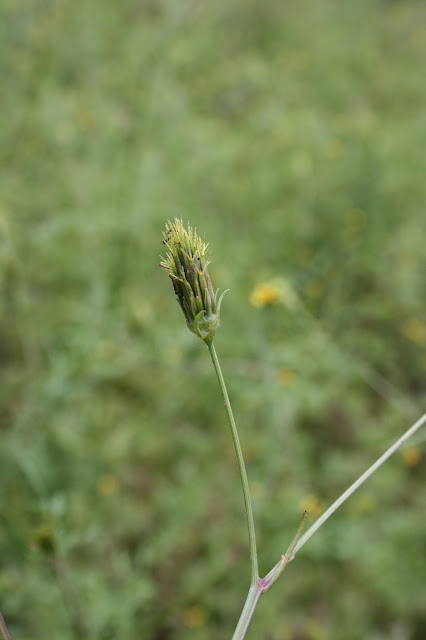 Spanish needles (Bidens bipinnata) is a member of a genus well known for its barbed seeds that catch on clothing and hair, and get transported well away for dispersal purposes. Though it shares the same common name as its white-flowered cousin, Bidens alba, it is quite distinct and impossible to confuse. Spanish needles occurs throughout much of Florida, except the western panhandle and the extreme southern peninsula. It also is reported from nearly every state in the southern two-thirds of the U.S. It is not a wetland plant, but is most commonly encountered in disturbed sites such as roadsides and agricultural edges in mesic to well-drained soils.
Like its more common cousin, Spanish needles is an upright annual and forms a noticeable taproot. The stems reach a mature height of about 3 feet in late summer. As the Latin name suggests, the leaves appear to be bipinnately compound - though they are, in fact, simple, but deeply dissected. They are opposite each other on the stem and several inches long near the base of the plant.
Flowering occurs in late summer and fall. The plants above were photographed along a roadside in Jefferson County on September 26, 2015. Many flowers are produced at the tips of the stems, they are less than 1/2 inch across, and composed of a set of bright yellow ray petals encircling a center of yellow disk flowers.  Once flowering ends, the ripened fruit is an elongated collection of 4-barbed achenes.
Spanish needles attracts pollinators, but has few aesthetic qualities that would make it suited for a home landscape. As such, it is a plant most likely to be encountered on a hike along disturbed edges in full to partly sunny locations. Just watch that you don't take some home with you, hooked tightly to your socks or pant legs.

Posted by Hawthorn Hill at 1:28 PM