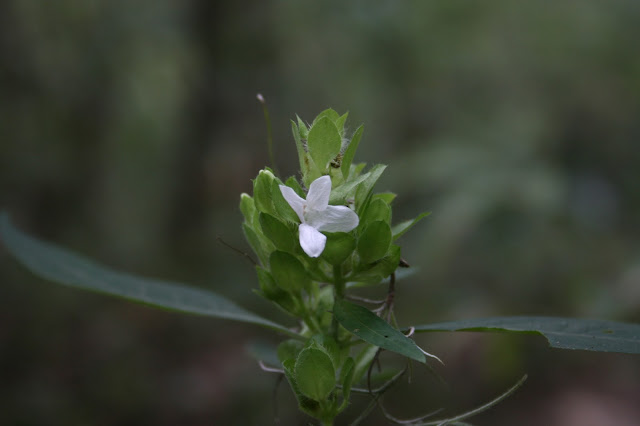 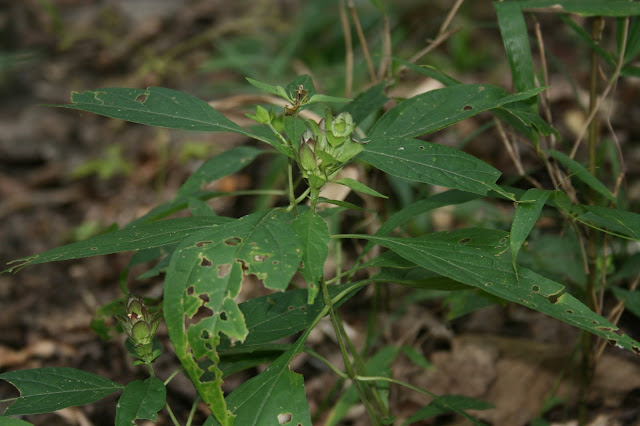 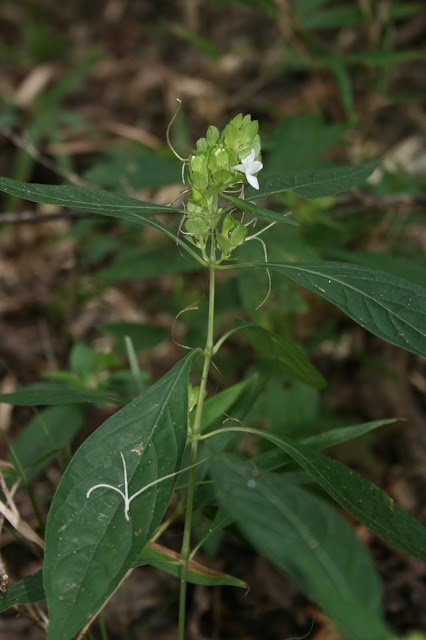 Yeatesia (Yeatesia viridiflora) is a member of the same family as wild petunia (Ruellia) and twinflower (Dyschoriste), the Acanthaceae, yet is not propagated commercially as these other two genera are and generally is not included in books featuring Florida wildflowers. Perhaps it's because it has a limited range here; it is reported only from a 4-county area in the central Panhandle in and near Torreya State Park. It also occurs in much of the western half of the Southeastern Coastal Plain - from Texas to Georgia. In this region, it is most often found in the understory of deciduous woodlands where it gets some protection from full sun, but in light gaps where it is not completely shaded.
Yeatesia is an herbaceous perennial that dies back to the ground in winter. It emerges in early spring and reaches a mature height of 18-24 inches by June. The foliage very closely resembles that of the common wild petunia (R. caroliniensis), and when not in flower it could easily be mistaken for it.  The leaves are thin and broadly elliptical.  They also are opposite each other on the stem with long petioles. On close examination, the surface of the leaves are sparsely "hairy".
Flowers are produced at the top of the stems in compact spikes; each flower is surrounded by a pair of large bracts. This characteristic makes the identification of this species easy. Single, 4-petal bright white flowers are produced within this spike. Each remains open for only one day - normally only in the morning half of the day, but flowering proceeds for several weeks on individual plants from late spring to summer. The photographs above were taken 15 August in Torreya State Park and most individuals seen had just finished flowering for the year. The flowers attract pollinating insects.
Yeatesia would make an interesting addition to a shade garden if not planted in deep shade. As so few native wildflowers are suited to these conditions, it makes its propagation even more useful.  We have not had experience with it here in our landscape nor intend to grow it at Hawthorn Hill as we are so distant from its natural geographic range.  Hopefully, it will be taken on by some of the native nurseries in north Florida. I suspect it would be as easy as its widely grown relatives to propagate in a nursery setting.

Posted by Hawthorn Hill at 8:52 AM