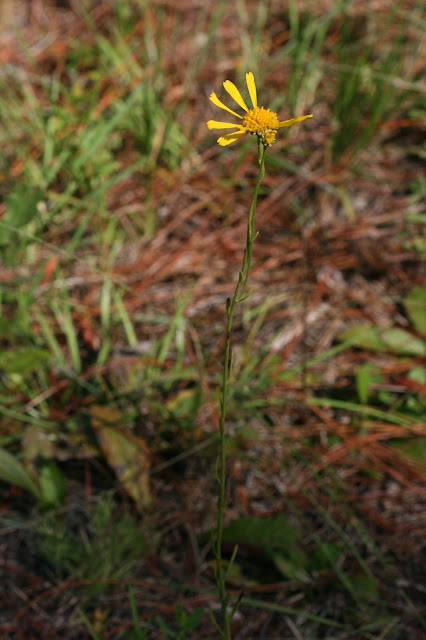 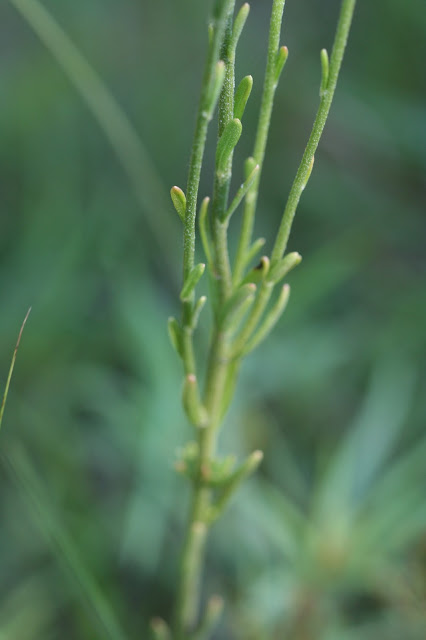 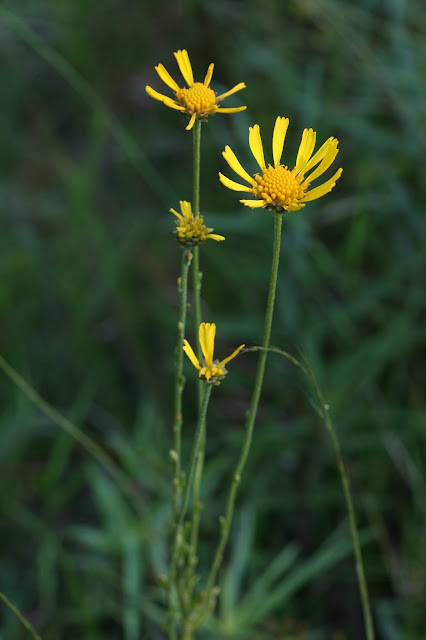 While honeycombhead (Balduina angustifolia) is ubiquitous throughout Florida in dry uplands, the more diminutive one-flowered honeycombhead (B. uniflora) is reported only from north Florida counties in moist open savannas, roadsides, and moist pinelands.  It also is recorded from most of the Southeast Coastal Plain - from Louisiana to North Carolina.
One-flowered honeycombhead is an herbaceous perennial that dies back to the ground in winter. In spring, it emerges and forms a small rosette of elliptical leaves that are about four inches long. From this, a single thin stem is produced. It has tiny elliptical leaves up the 2-3 foot tall stem. A single flower typically is produced at the end of this stem, though sometimes it branches. A single flower is produced at the end of each stem.
Flowering occurs in mid-summer to November.  The yellow central disk is typical of the genus, being "bumpy" in appearance. This gives way to a stiff papery fruiting structure after flowering which looks something like a honeycomb. The bright yellow ray petals are thin and widely spaced around the central disk. Overall, the flowers are large for the size of the plants; both the central disk and the ray petals are 1 inch long on average - making a flower that is 2 inches across. Honeycombheads are in the aster family and therefore are good plants for pollinating insects.
Though its upland cousin is widely propagated, one-flowered honeycombhead is not and currently is not available from any nursery affiliated with FANN - the Florida Association of Native Nurseries.  I hope that gets rectified someday as this wildflower seems to have many attributes that would warrant its inclusion in a home landscape - one that is moist to wet in the summer months. We do not currently grow it at Hawthorn Hill.
Posted by Hawthorn Hill at 2:10 PM