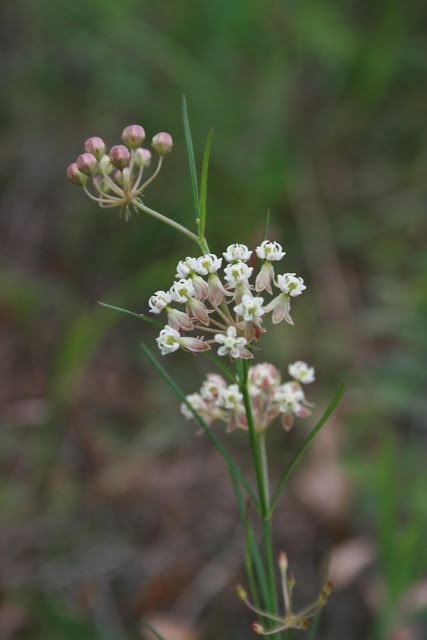 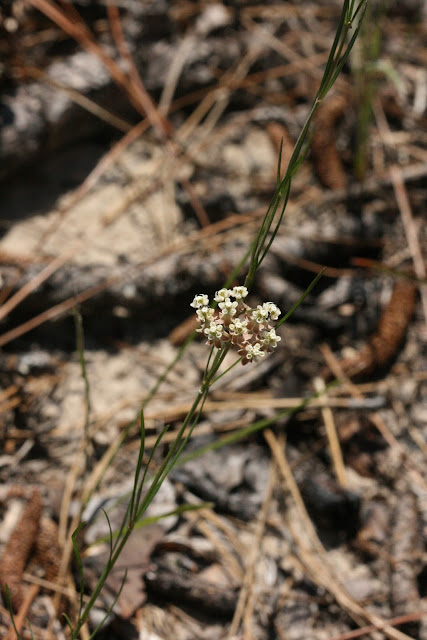 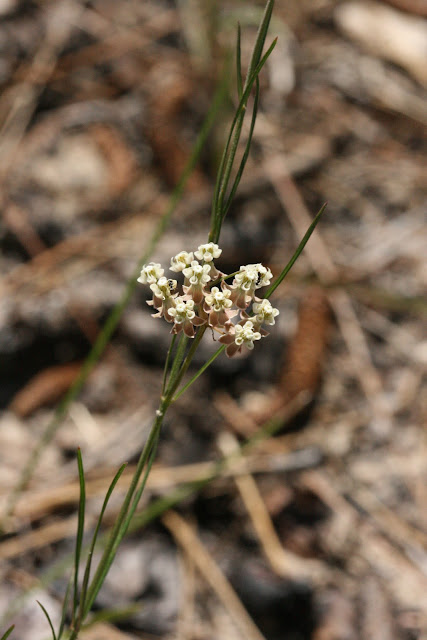 Florida is home to 21 species of native milkweeds and one common non-native. Whorled milkweed (Asclepias verticillata) is one of the lesser known members of this group. Native to well-drained sandy uplands throughout Florida, it is also present in much of eastern North America.  But, because of its somewhat diminutive stature, it is not always noticeable and never very showy.
This is a deciduous perennial that dies completely back to the ground each winter and arises again in early spring. Whorled milkweed gets is Latin and common names from its foliage.  The leaves are thin and whorled along the stems. Mature plants rarely stand taller than 30 inches.  Because of the thin foliage and its small size, whorled milkweed would need to be planted in mass to be an effective larval food for the voracious appetites of milkweed butterflies.
Flowering occurs during the summer.  Small umbels of purplish white flowers are produced along the stem.  Like all milkweed blooms, they attract the attention of butterflies.
Whorled milkweed is best used in sunny locations with sandy soils.  Plant several plants together in small clusters of 3-5, and have several of these in a mixed wildflower planting if butterflies are important to you.  It should be planted in the front half of the garden and mixed with other medium to small sized wildflowers and native grasses.  Good companion plants would include grassleaf goldenaster (Pityopsis graminifolia), Garber's blazing star (Liatris garberi) and pink penstemon (Penstemon australis).  Though this milkweed has not not been offered before by other nurseries affiliated with AFNN - the Association of Florida Native Nurseries, we are currently growing it at Hawthorn Hill in limited numbers.  Ask us if you are interested as I suspect our supply will be quickly sold.
Posted by Hawthorn Hill at 11:39 AM 4 comments: 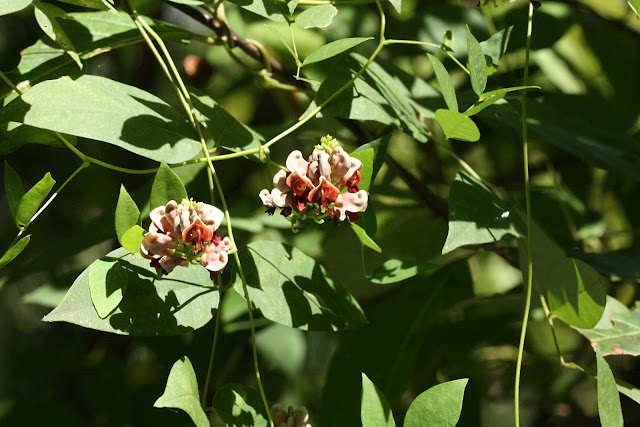 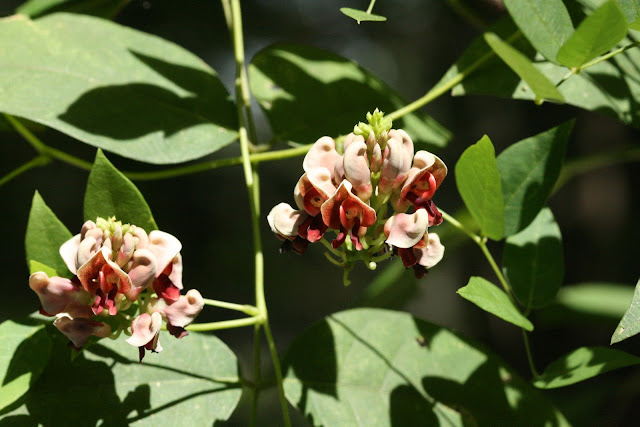 Ground nut (Apios americana) is an herbaceous vine native to much of Florida and nearly all of eastern North America.  It is most commonly encountered in moist areas, such as the edge of streams, and in partial sun to mostly shady locations.  It is more tolerant of less moisture and more sun, once established, but it will perform best if given conditions that approach what it prefers in nature.
Ground nut, like most vines, can be somewhat aggressive and difficult to control in a well-manicured landscape.  But, in less formal settings, it has much to offer.  For one, its tubers and seeds are edible and once were important to the diet of Native Americans and the early colonial settlers.  The tubers were used in soups and stews or fried like potatoes.  Because it is a member of the legume family, the seeds (likes peas and beans) are high in protein and quite nutritious as well.
Ground nut is also a wonderful addition to a butterfly garden; being the larval food of the silver-spotted skipper.  Though this skipper may not simply magically appear in an urban landscape just because this wildflower is added, it most certainly will not show up if it isn't.
Flowering occurs in the mid summer months and the blooms are quite showy.  Clusters of mahogany to maroon pea-like flowers dangle from the leaf axils and attract bees and other polliantors.  Eventually, the pollinated flowers produce "beans" about 2-3 inches long.  When they ripen, they split open and scatter the pea-like seeds away from the parent.
Despite its many positive qualities, some thought should be given before adding this to a landscape.  Vines in general tend to spread and ramble throughout the landscape in conditions that are favorable.  Once well established, they may be difficult to remove if you change your mind.  And, the tubers increase in size over the years and become difficult to pull out.
I believe ground nut is best planted at the edge of a shady woodland landscape setting and maintained on a trellis or fence.  Its spread will be restricted somewhat by direct sunlight and it will mostly remain within the shadier locations and on the supporting structure.  It also could be effectively used in a woodland that is allowed to develop naturally and without much maintenance.
We have recently begun propagating ground nut at Hawthorn Hill and will have some nice sturdy plants ready by summer.  If you are interested, let us know.  We are growing it in very limited numbers at this time.
Posted by Hawthorn Hill at 11:00 AM 2 comments: 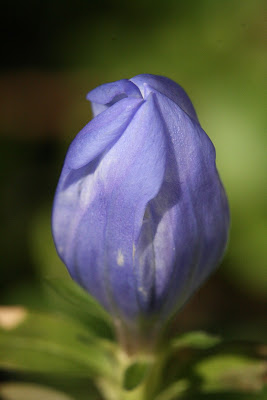 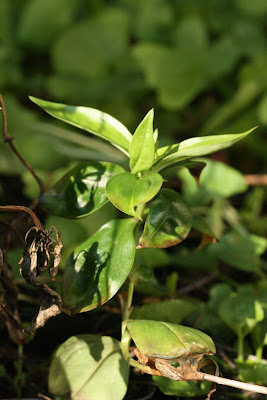 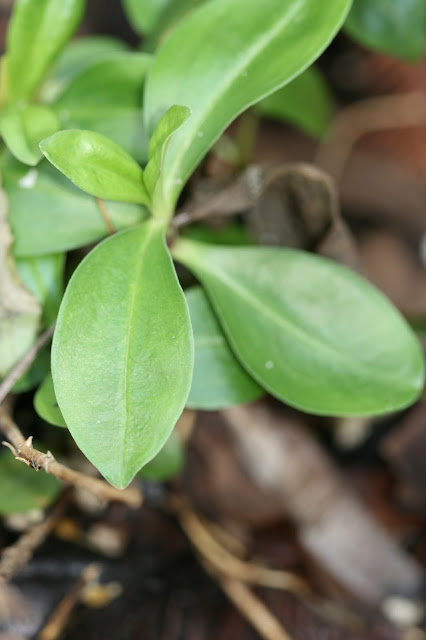 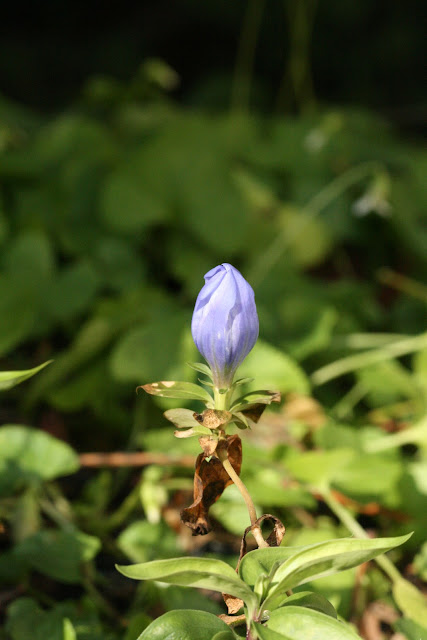 Soapwort gentian (Gentiana saponaria) ﻿is quite rare in Florida; occurring naturally only in riverine wetlands in Gadsden and Wakulla Counties in the central Panhandle.  This is yet another example of a plant rare in Florida and at its extreme southern distributional range. It occurs nearly throughout the eastern half of the US - even into the northern peninsula of Michigan. Throughout its distribution, it is limited to moist soil habitats and often in partially shady locations.  Of the four gentians in Florida (all limited to the panhandle), soapwort gentian has the most limited state distribution.
Soapwort gentian is a perennial that dies partially back to the ground in winter.  It emerges in early spring and eventually may reach a mature height of 1-2 feet.  The lance-shaped leaves are opposite on the slender stems and light green.
Blooming generally occurs in mid summer, after the start of the typical rainy season, though this one planted in my Pinellas County yard decided to produce a solitary flower in mid January.  The flowers, like other gentians, are urn shaped and a beautiful sky blue in color.  Typically, they open only slightly at the tip of the bloom; excluding most pollinators except certain bees with long enough tongues.
Soapwort gentian is one of many Florida wildflowers that can be grown successfully outside its natural range if given the right conditions.  We keep ours in landscape pots with good potting soil that we keep moist. We relish the beauty of this plant, but are not likely to attempt propagating it at Hawthorn Hill.  Thankfully, another Florida nurseryperson, Dan Miller of Trillium Gardens in Tallahassee, is making it available.  If you are interested, please contact him at: dsmillerfl@aol.com and ask him for a price list. He is currently growing a great many outstanding north Florida wildflowers that are available from no one else in the state.

Posted by Hawthorn Hill at 8:20 AM No comments: 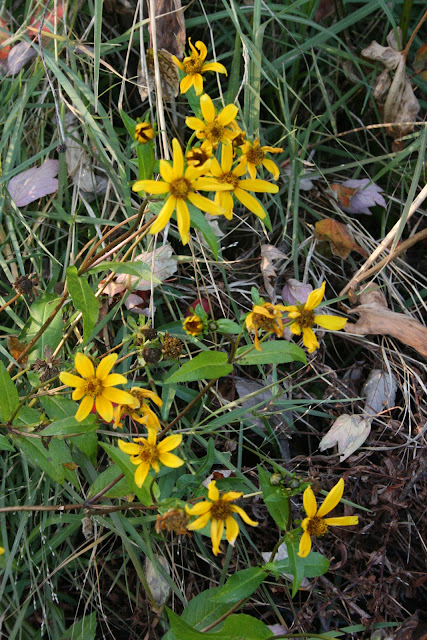 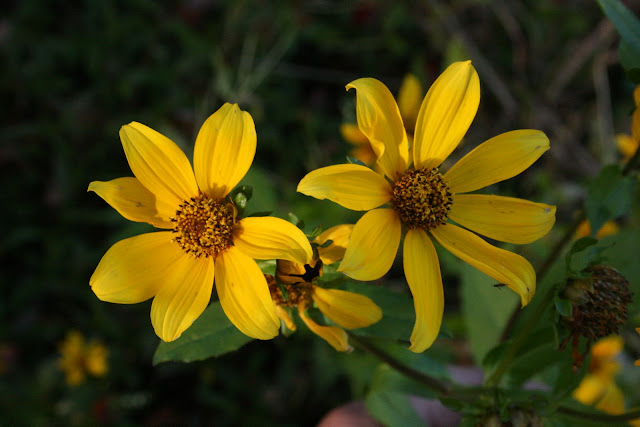 Burr marigold (Bidens laevis) is a member of a genus best known for the very weedy, Spanish needles (Bidens alba). All members share similar characteristics: they are annuals that produce flowers especially valuable to pollinating insects and seeds that have needle-like appendages that "stick" to clothing and animal fur.  They are, therefore, wonderful additions to a wild butterfly/bee landscape, but a horrid nusiance to landscapes where we might spend time walking through.
Burr marigold is not a plant for small gardens, but an exquisite addition to an expansive wetland planting where it can spread and produce large swaths of bright yellow flowers in the very late fall and early winter.  It occurs statewide in Florida and throughout much of the Deep South to Texas in wet soil habitats.  It prefers marshes and river flats, but can grow in a great many locations if given at least partial sun.
Like other members of this genus, it persists and spreads over time by producing large numbers of seed.  These seeds can be important food sources for some songbirds, but the real wildlife value comes from its use as a nectar source for bees and butterflies.  Patches of burr marigold bloom heaviest in November and early December and well-established plantings may contain thousands of flower heads at any one time.
Individuals reach about 3 feet tall at flowering time.  They are weakly stemmed with numerous short side stems.
If you have an area around a pond or stream, add this in locations that stay moist and frequently flood to about 6-12 inches during high water.  You don't need much as it will spread throughout suitable habitat.  This species is infrequently offered by commercial sources that specialize in wetland mitigation plantings.  We do not grow it at Hawthorn Hill, but admire its beauty in the natural areas we hike and explore each late fall.
Posted by Hawthorn Hill at 12:26 PM 7 comments: