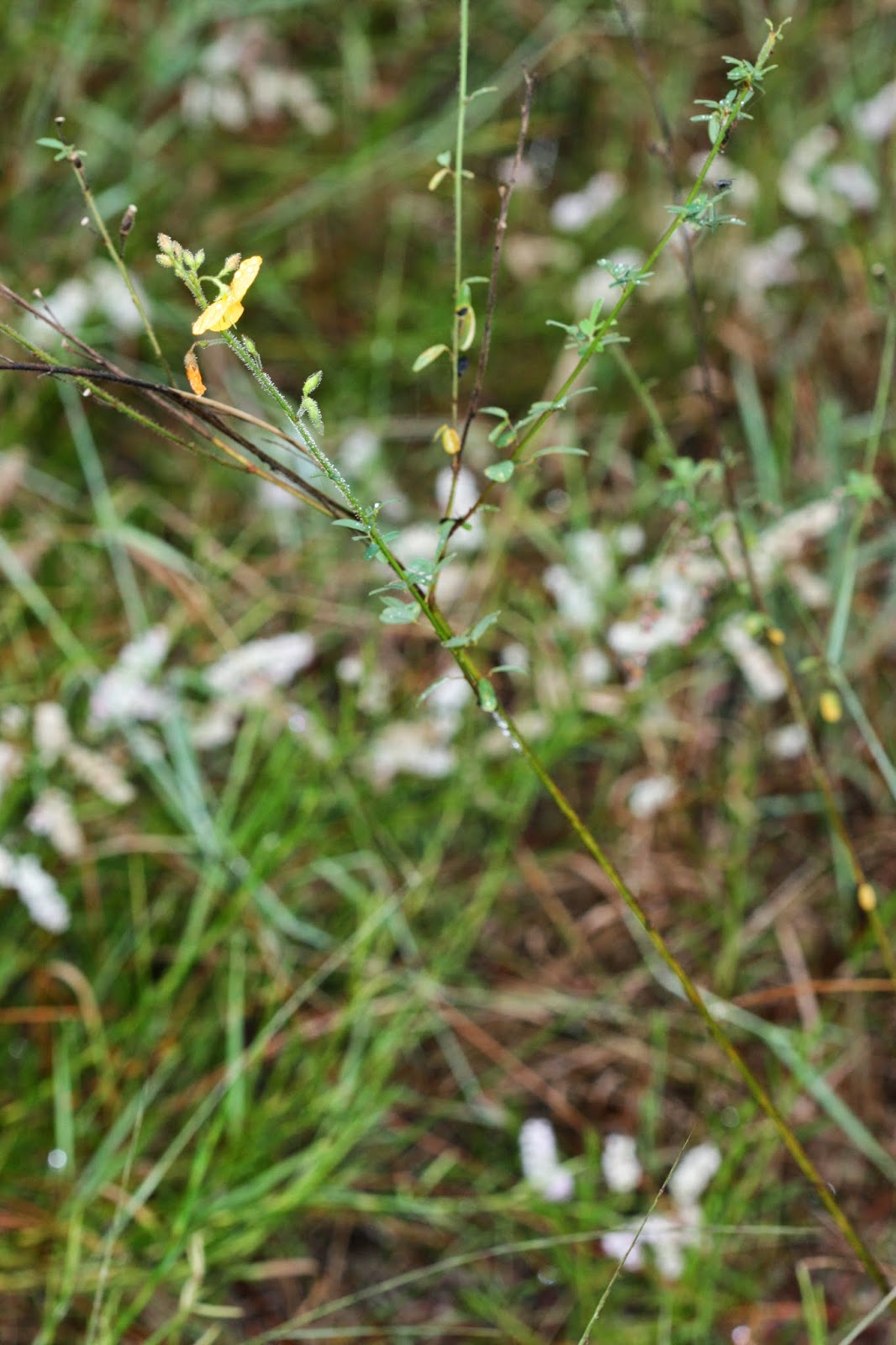 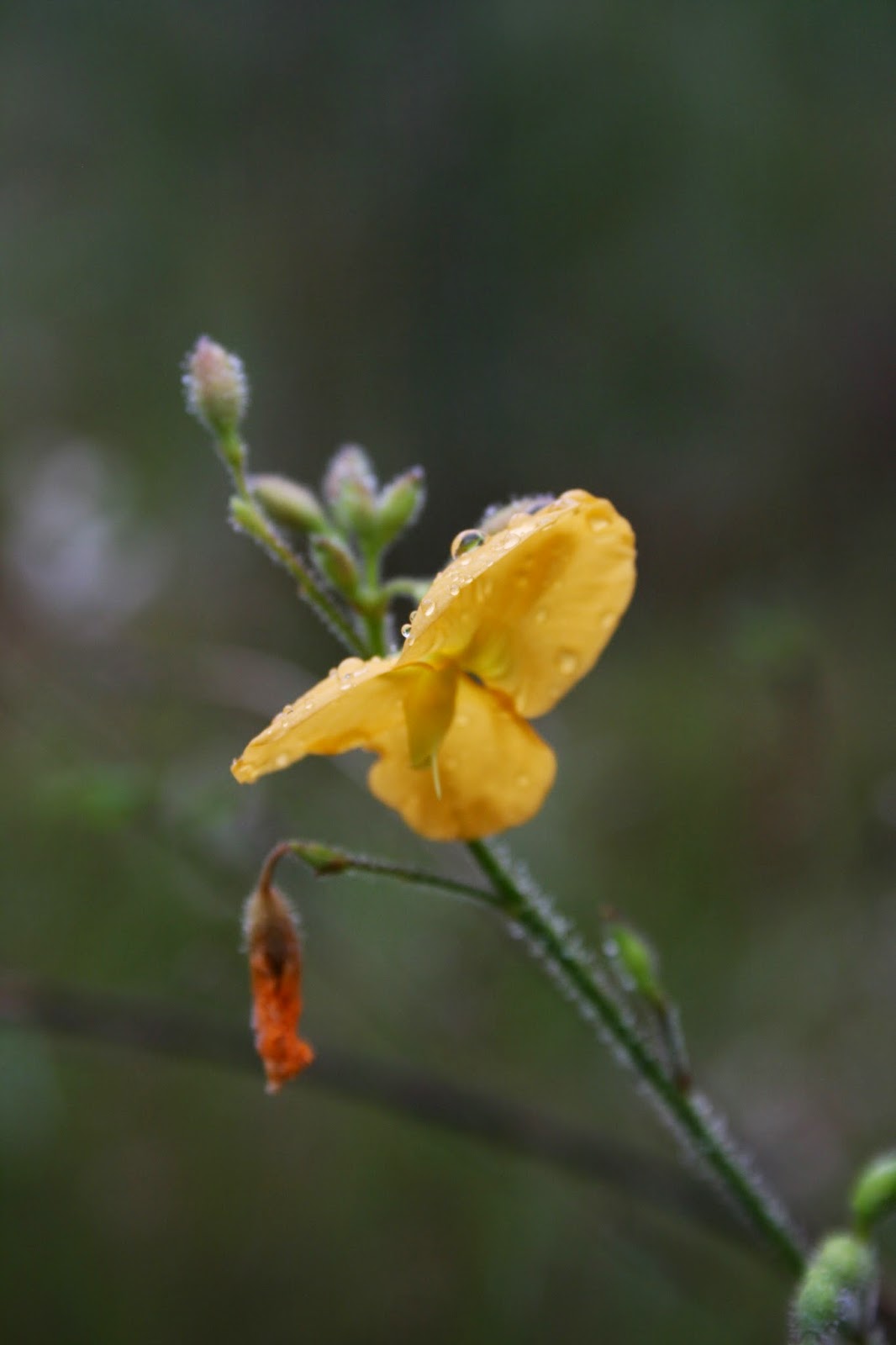 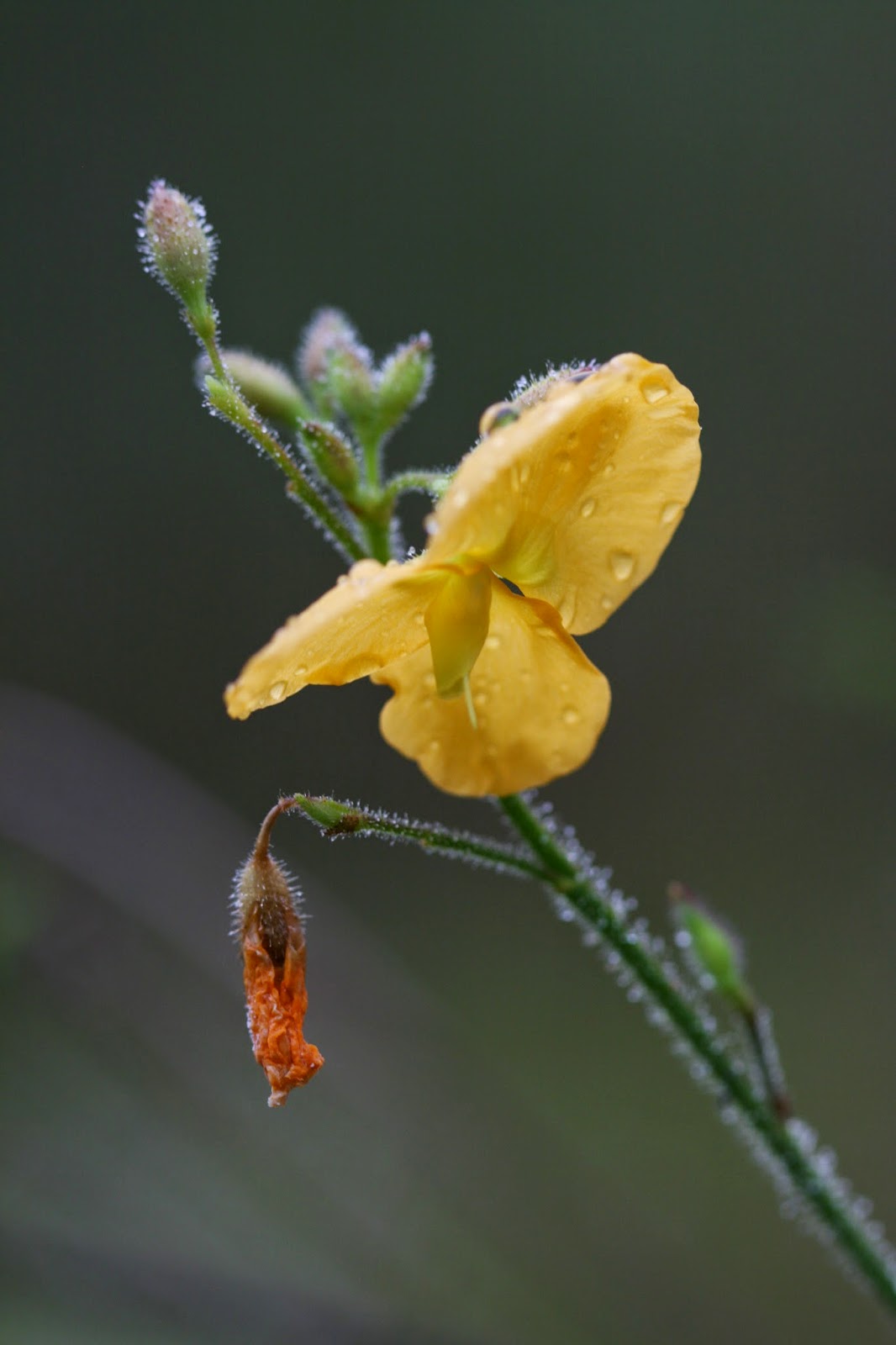 Alicia (Chapmannia floridana) is endemic to Florida and found throughout much of peninsular Florida in well-drained sandy uplands - scrub, sandhill, and open sandy woodlands.  The genus name honors Dr. Alvin Chapman who authored the classic Flora of the Southern United States in the late 1800's; a book that served as the standard field guide of this area for a great many years.  Alicia is the sole member of this genus.
Alicia is an annual member of the legume family.  Emerging in spring, it becomes a lanky stem by summer that may reach 3 feet in height.  All parts of the plant are covered by sticky hairs. The leaves are confined mostly to the lower portions of the plant. They are alternate along the stem and comprised of 3-7 leaflets.  Flowering can occur over a protracted period from late spring through fall.  A succession of buds are formed at the top of the stems. Each flower is canary yellow and composed of three petals - the top petal being the largest.  Each bloom is open only in the morning hours, unless the day is extremely cloudy.  Pollinated flowers form pea-like fruit.
Alicia is an interesting species, but lacks most of the characteristics that would make it a good candidate for the home landscape.  It has never been offered for sale by any of the nurseries affiliated with FANN (the Florida Association of Native Nurseries) to the best of my knowledge and is unlikely to in the near future.  This endemic is simply a wildflower to be recognized and admired when encountered in the field.
Posted by Hawthorn Hill at 12:45 PM 3 comments: 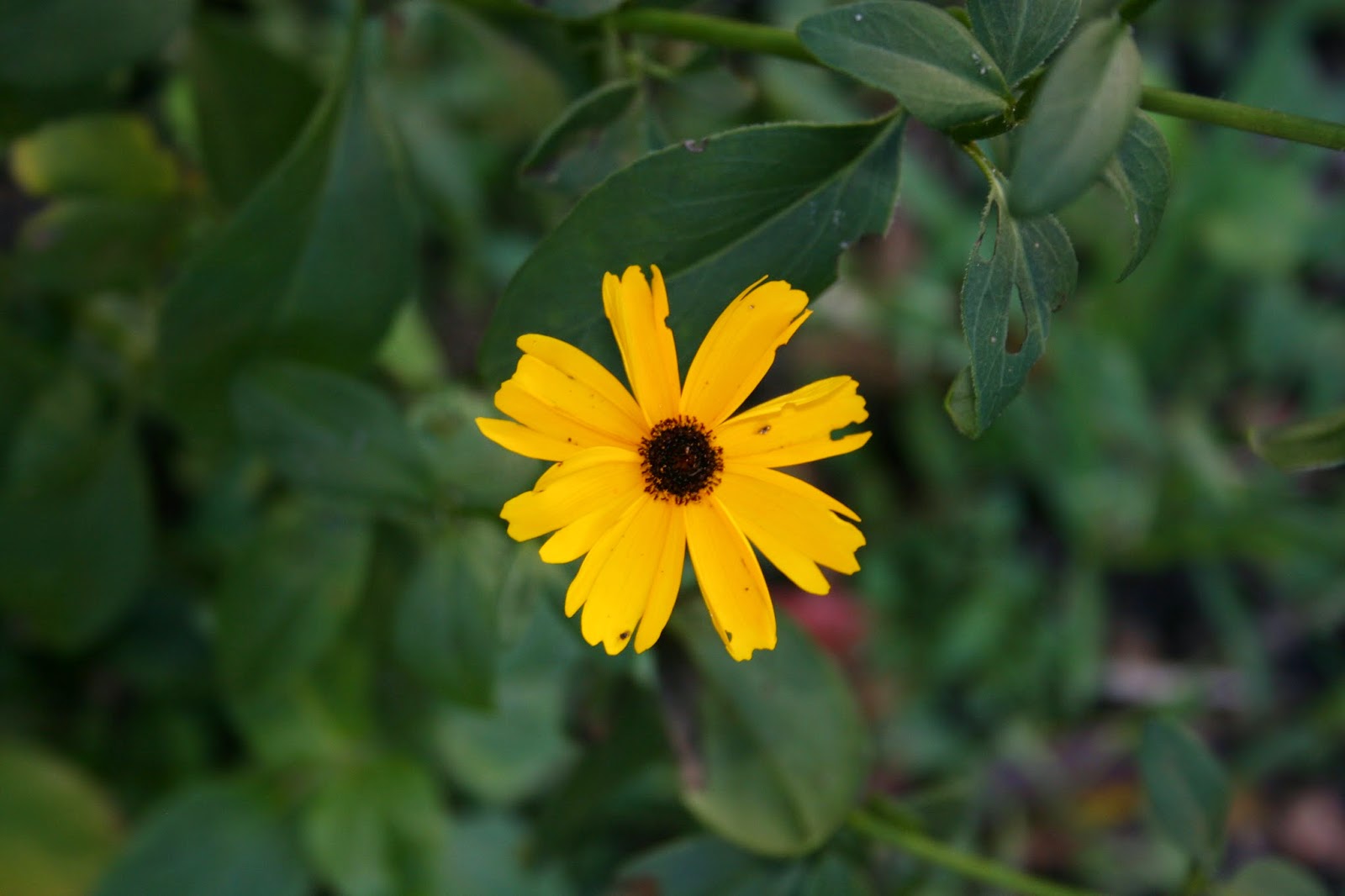 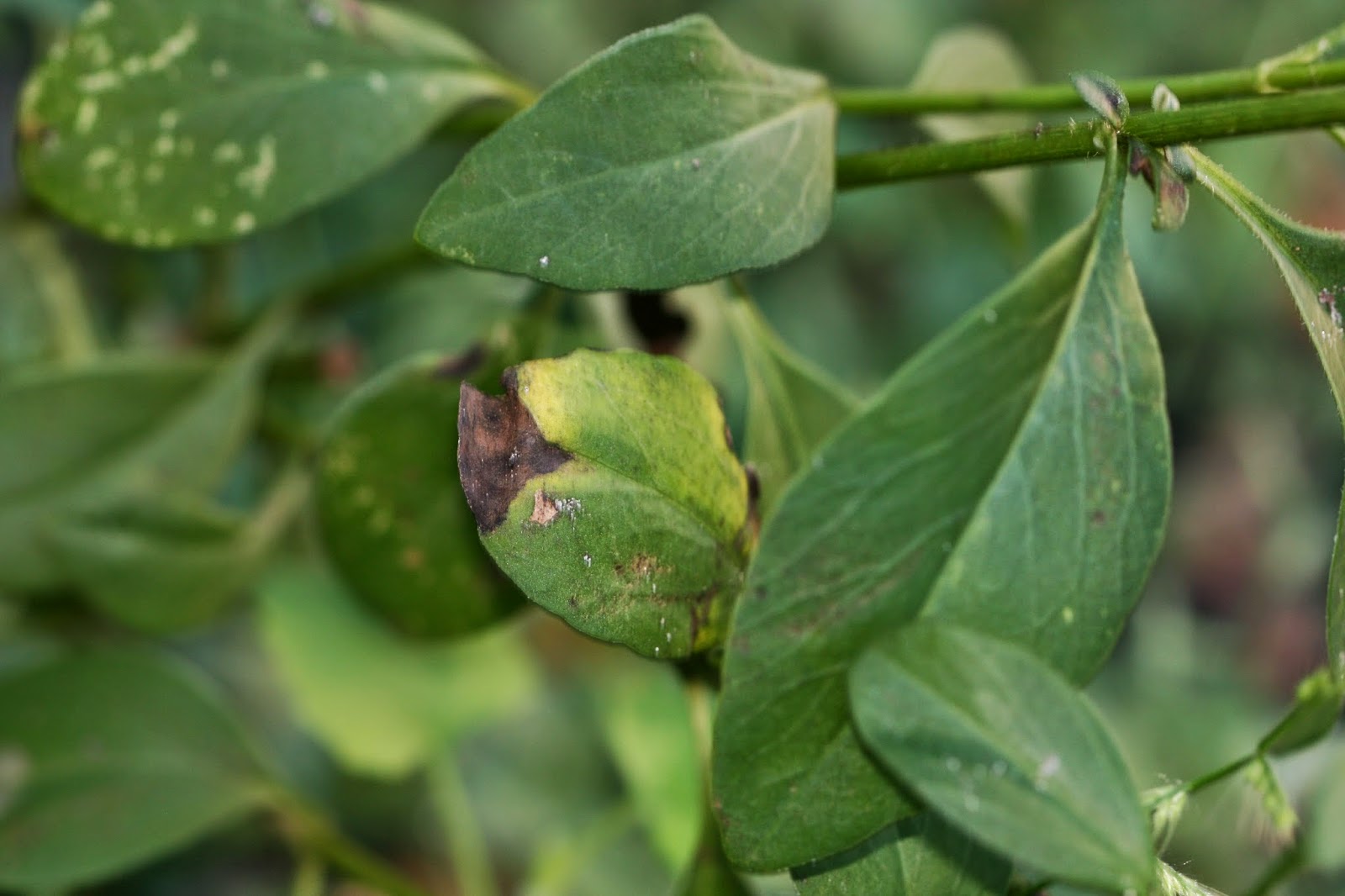 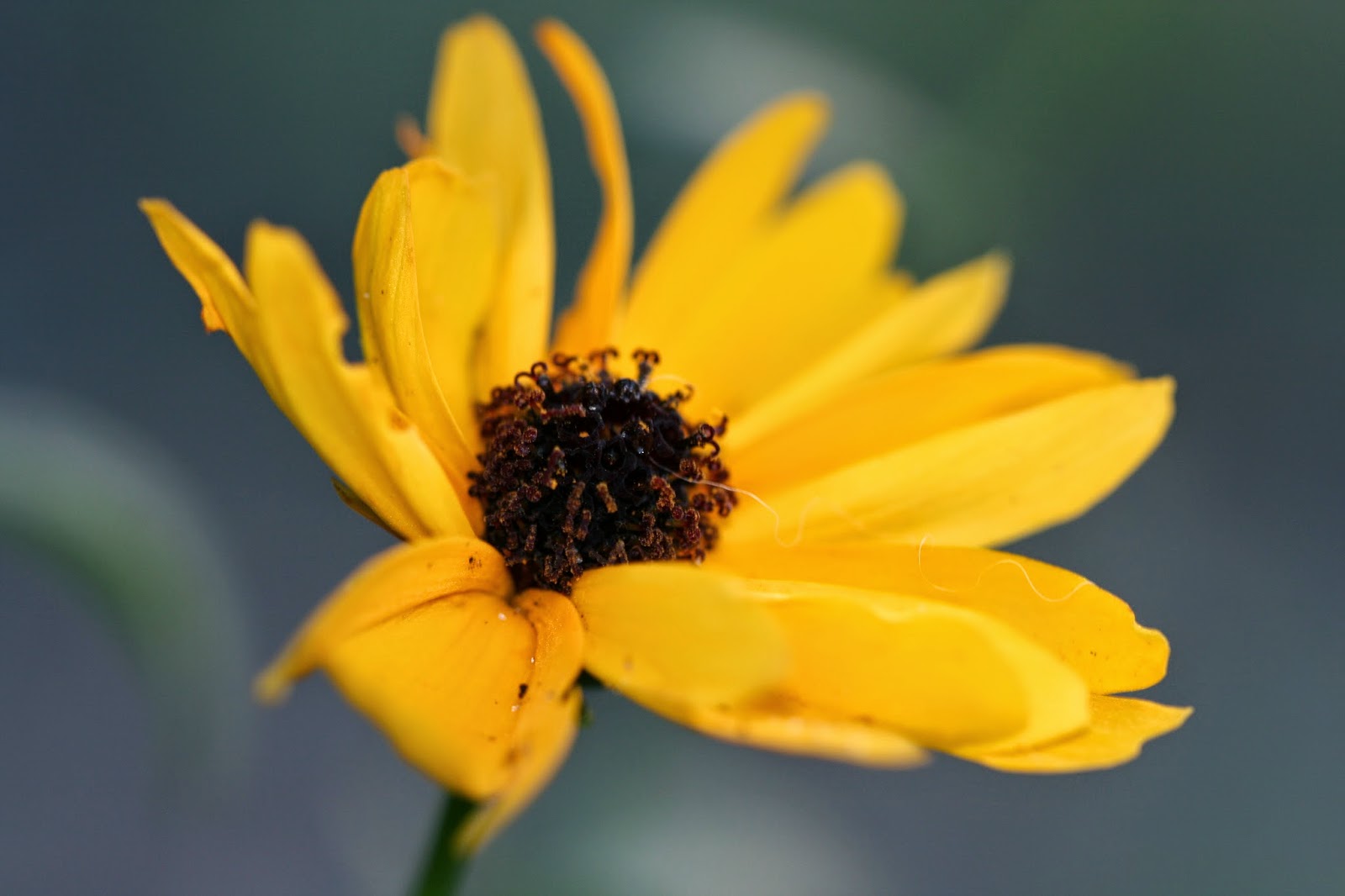 Chipola coreopsis (Coreopsis integrifolia) is quite rare in Florida, listed as a state endangered species and vouchered only from 5 counties - all along the Georgia border.  The primary distribution is along the Chipola River in Jackson, Calhoun, and Washington Counties in the central panhandle.  This species is rare elsewhere in its national distribution.  It is listed as a state threatened species in Georgia, where it is found in only four counties near the Florida border, and it is considered an "at risk species" in South Carolina where it is known from only a few southern counties.  In all its natural populations, it occurs in floodplain wetlands, along blackwater streams, where it receives dappled shade and plenty of moisture.
Florida is home to 15 species of coreopsis (tickseeds) and they can sometimes be a bit tricky to differentiate.  Chipola coreopsis is a perennial that dies back to the ground each winter.  In spring, it forms basal rosettes that can spread in all directions by underground rhizomes.  The stems eventually reach a mature height of about 2 feet by late summer.  As the plants spread, multiple flower stalks are common.  They have few branches, but each is topped by a single flower comprised of bright yellow ray petals and a dark central disk.  The flowers are about 18 inches across and each ray petal has three teeth at their outer margin.  Flowering only occurs in late summer to fall.
The foliage is distinctive.  The 1-3 inch long somewhat succulent leaves are opposite each other on the stem, the leaves occur along the entire length of the stem, and they are oval in shape and without teeth along the margins.  As the Latin name implies, the leaf margins are simple.
Chipola coreopsis is quite rare, but is infrequently offered by native plant nurseries.  I have not found it to be an easy species to maintain in the home landscape. It is fussy about its growing conditions. Do not attempt it unless you can give it dependably moist soils and filtered sun.  Under such conditions, it is an attractive fall wildflower that can form stunning masses of color.
Posted by Hawthorn Hill at 12:12 PM No comments:

One more chance this fall to purchase wildflowers from Hawthorn Hill Native Wildflowers, in Seminole, FL. We need to make room before winter for all our new seedlings so we are having a FALL OPEN HOUSE, Sunday October 26, 9 am - 1 pm.  All plants will be reduced.  Please make plans to stop by, see our landscape and pick up some uncommon native wildflowers.  This is the best time to plant!  Email me for directions, or any questions you might have: huegelc55@aol.com 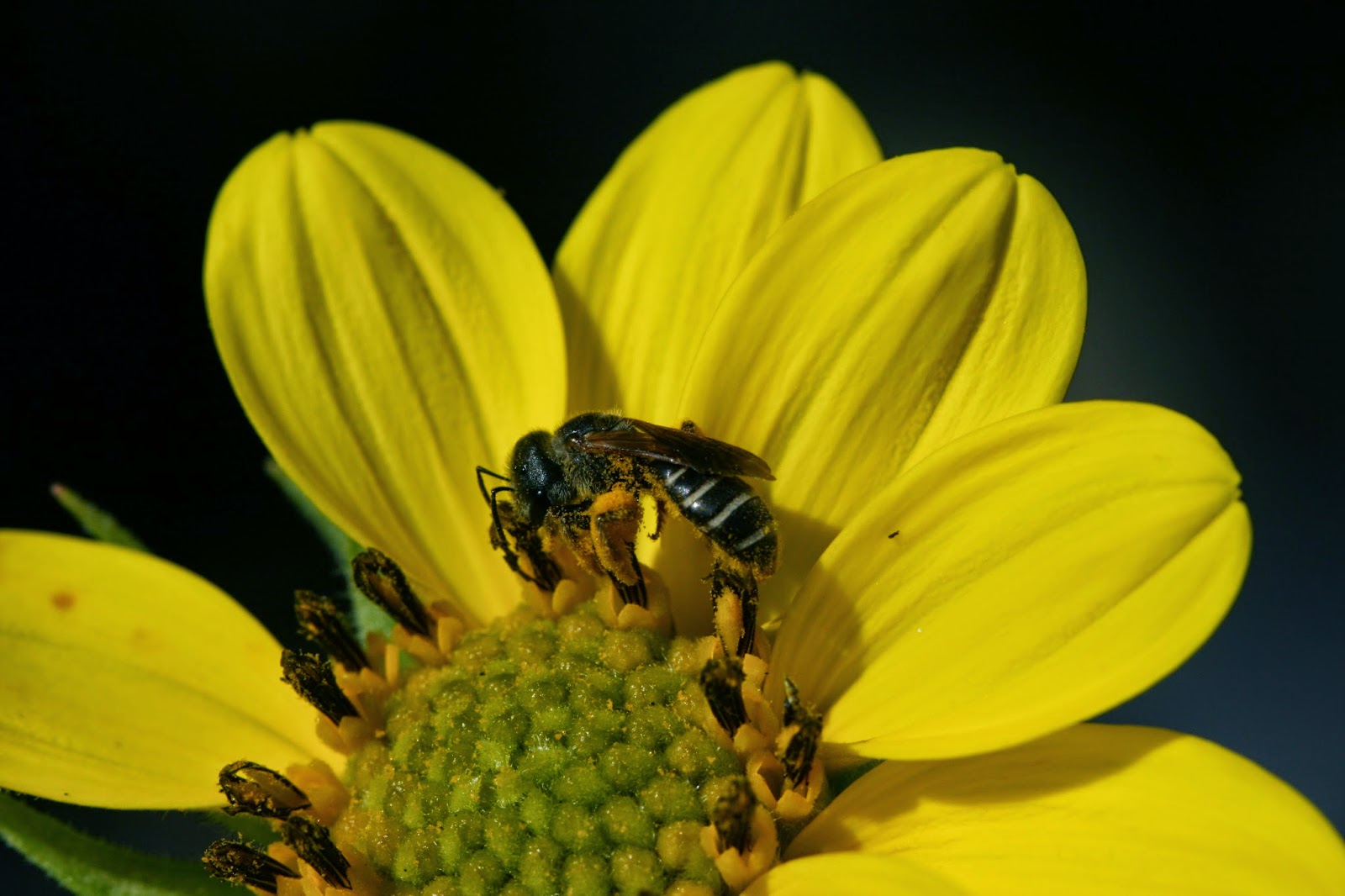 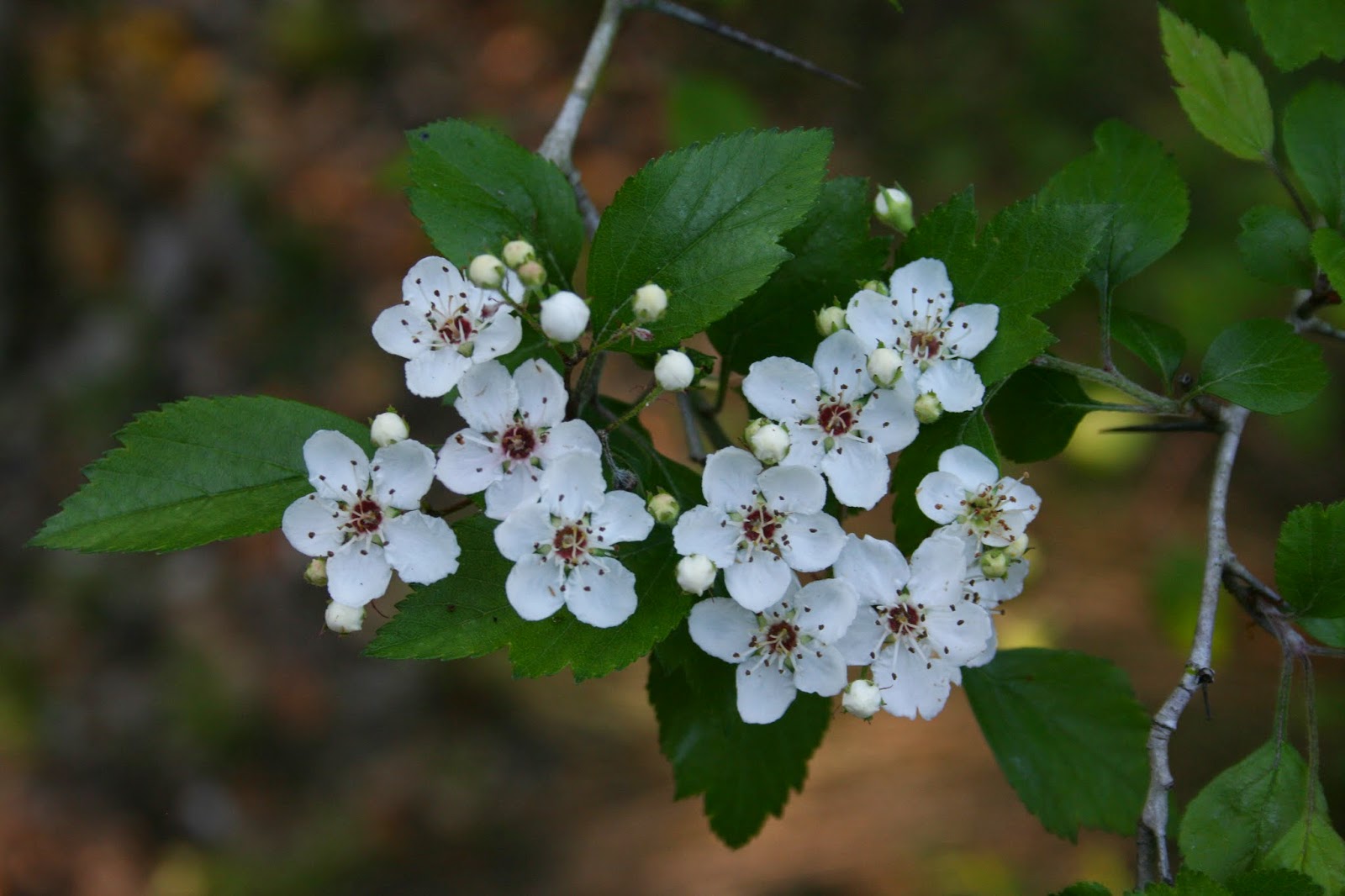 Posted by Hawthorn Hill at 11:19 AM No comments: