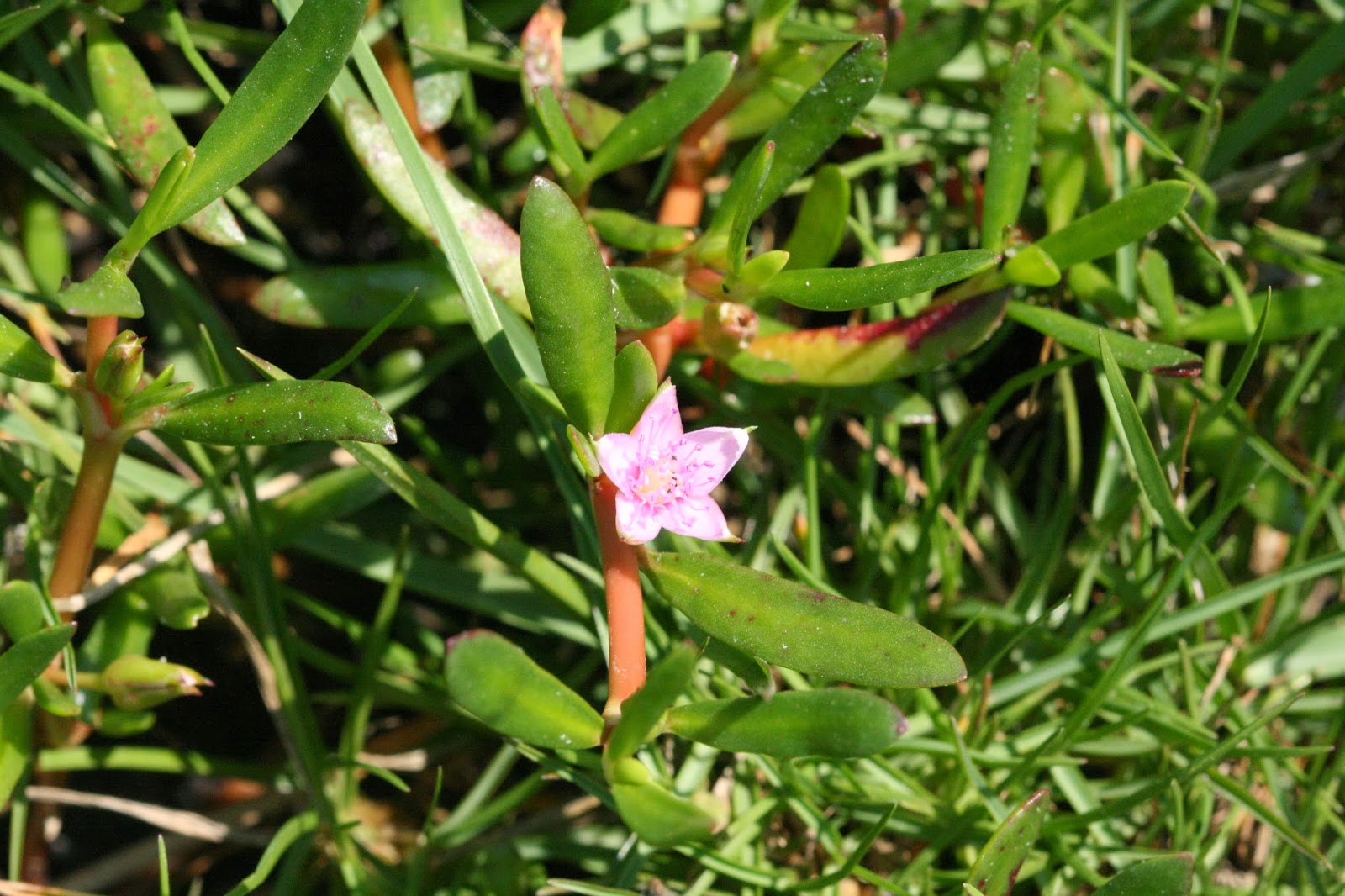 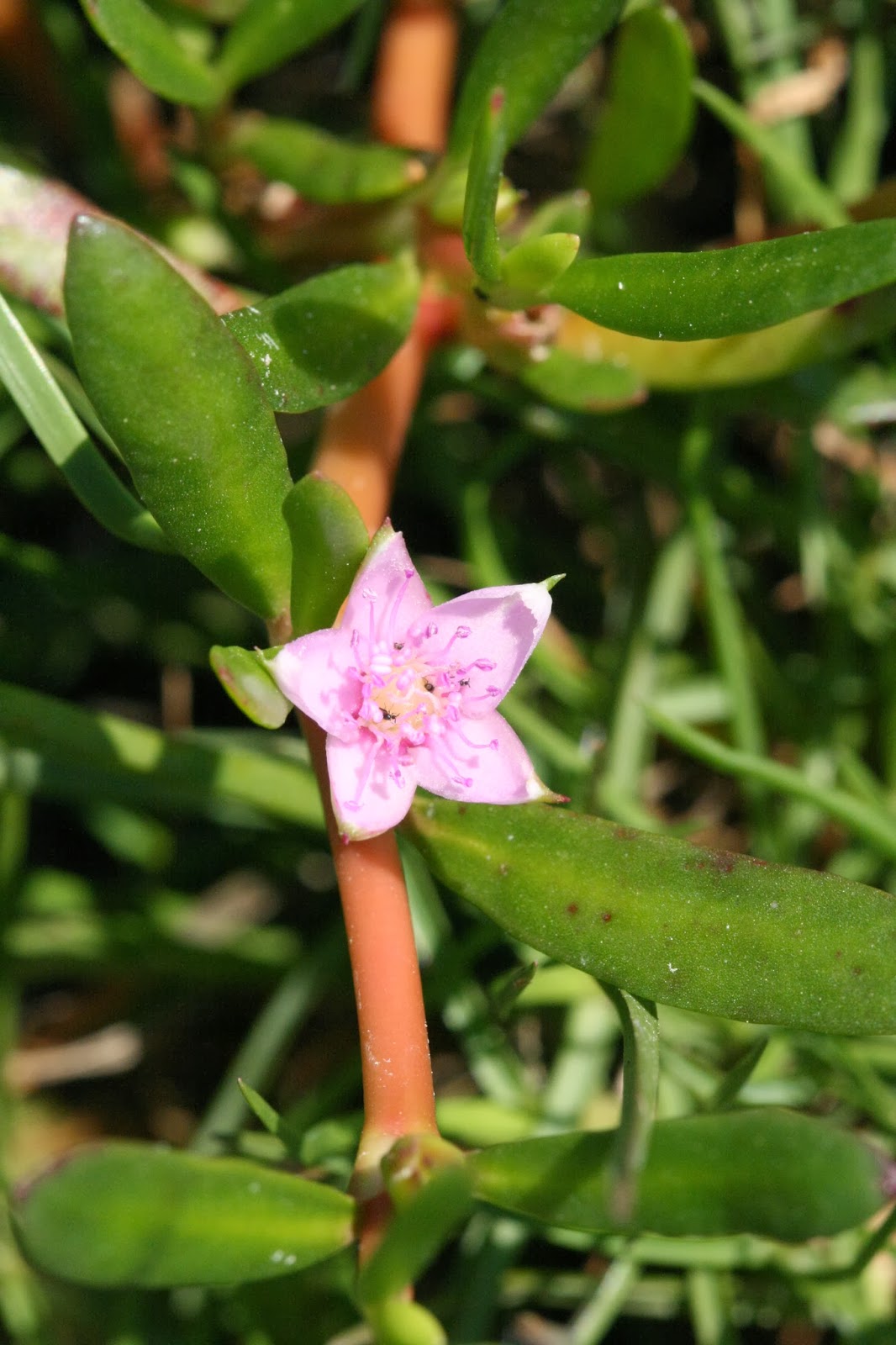 Sea purslane (Sesuvium portulacastraum) is a common occurrence in coastal dunes and the upper edges of salt marshes throughout Florida and other southeastern states from Texas to North Carolina.  It also has been reported in the Caribbean, Hawaii, and on most shorelines in tropical and subtropical areas worldwide.  A disjunct population is reportedly present in Pennsylvania as well.  Sea purslane is exceedingly tolerant of high salt levels and vagaries in soil moisture.  Its Latin name is derived from its outward resemblance to the garden purslanes (Portulaca spp.), so widely used in home landscapes.
Sea purslane, however, is a prostrate perennial designed for life in the harsh conditions found along the coast.  Its stems and leaves are especially waxy to reduce water loss and the leaves are succulent-like.  Both the stems and leaves often are reddish in color - especially in areas where they receive high light and salt.  This foliage scrambles along the ground, rooting periodically, and forming large mats.  The leaves are high in vitamin C and are salty in taste, therefore, it has been used to treat scurvy and is often added to salads. In some locations, the pulverized leaves are also used to soothe wounds caused by the spines of venomous fish.
The soft-pink 5-petaled flowers are produced year-round in warm areas.  They form along the stems, but open for only a brief period in mid-day.  Do not look for the blooms first thing in the morning.
Sea purslane is an excellent coastal plant to help stabilize dunes, but it is not a very good candidate for home wildflower gardens. It is widely propagated by native plant nurseries affiliated with FANN (Florida Association of Native Nurseries) - primarily for coastal restoration projects. Look for it along the coast, and taste a leaf as you walk by.
Posted by Hawthorn Hill at 6:28 AM No comments: 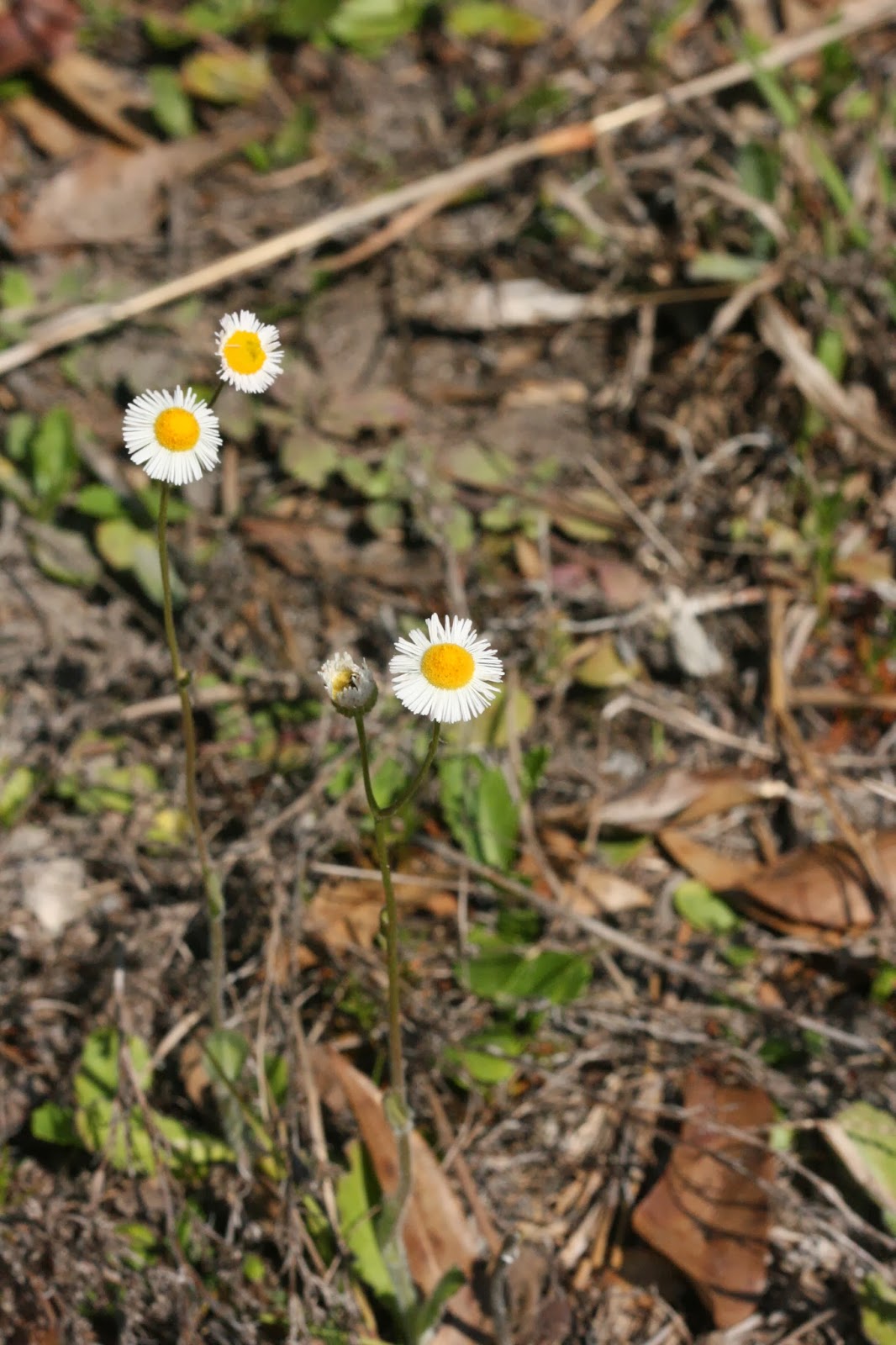 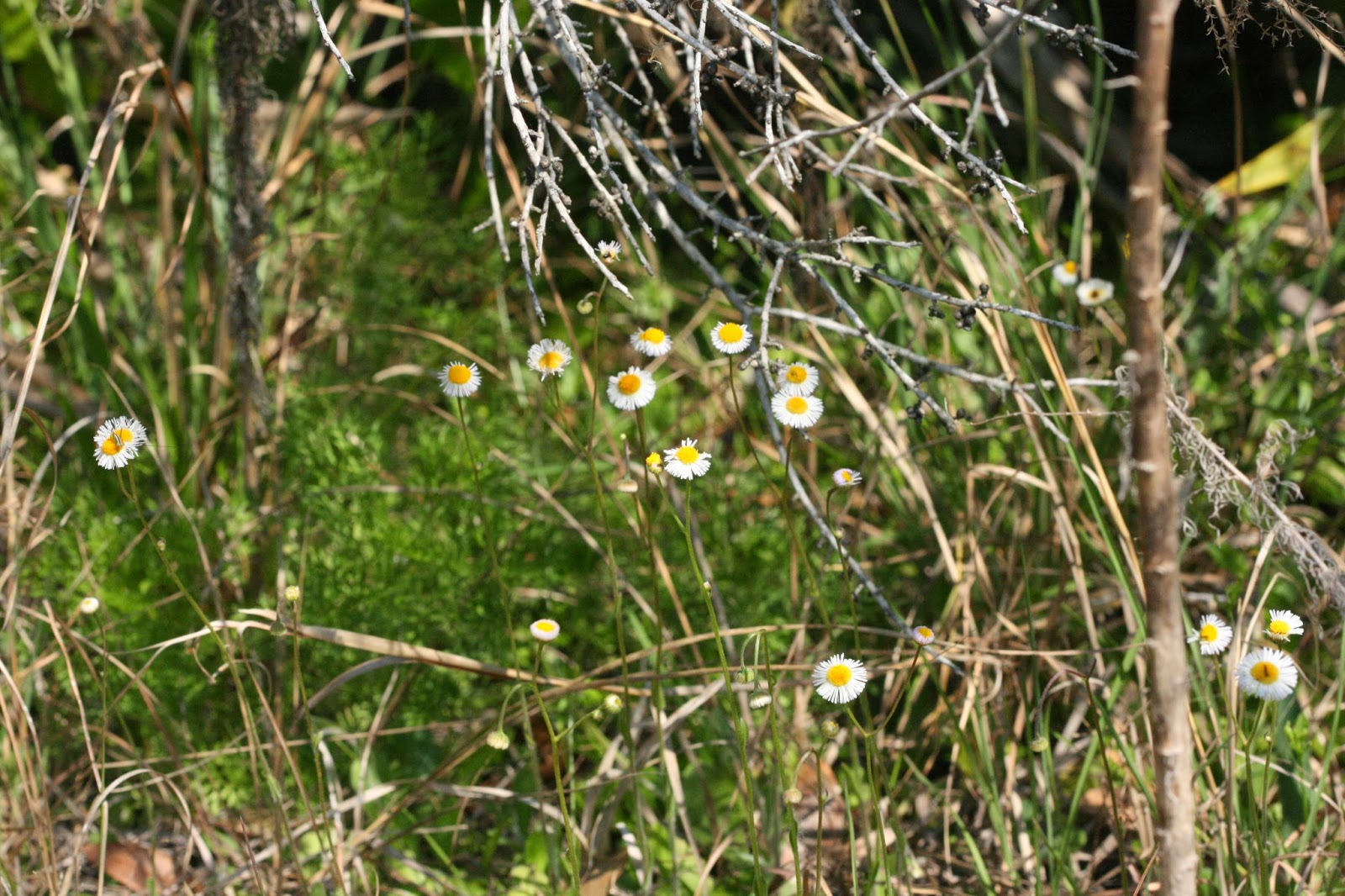 Daisy fleabane (Erigeron quercifolius) is a herbaceous short-lived perennial found statewide in a variety of open, upland disturbed habitats.  Outside of Florida, it is common in much of the Southeast.  It is often found along roadsides and open fields as it takes quick opportunity to colonize just about any opening or disturbance.
Daisy fleabane is also known as "oakleaf" fleabane as the basal leaves are lobed like some oaks are. In fact, the Latin name means "foliage like an oak."  These leaves form rosettes that are up to 6 inches across. The leaves lie flat to the ground, are somewhat linear and have a deeply notched margin.  They also are often yellow-green on color and are rough to the touch.
Leaves emerge in the spring or overwinter and the basal leaves form colonies of many plants.  Flower stalks emerge from the center of each and reach a mature height of 12-24 inches by early summer.  The flower heads are only 1/4-inch across, but are produced in large numbers.  Each is composed of many thin white ray petals surrounding a rounded yellow disc.  The flowers attract a diversity of small pollinators. 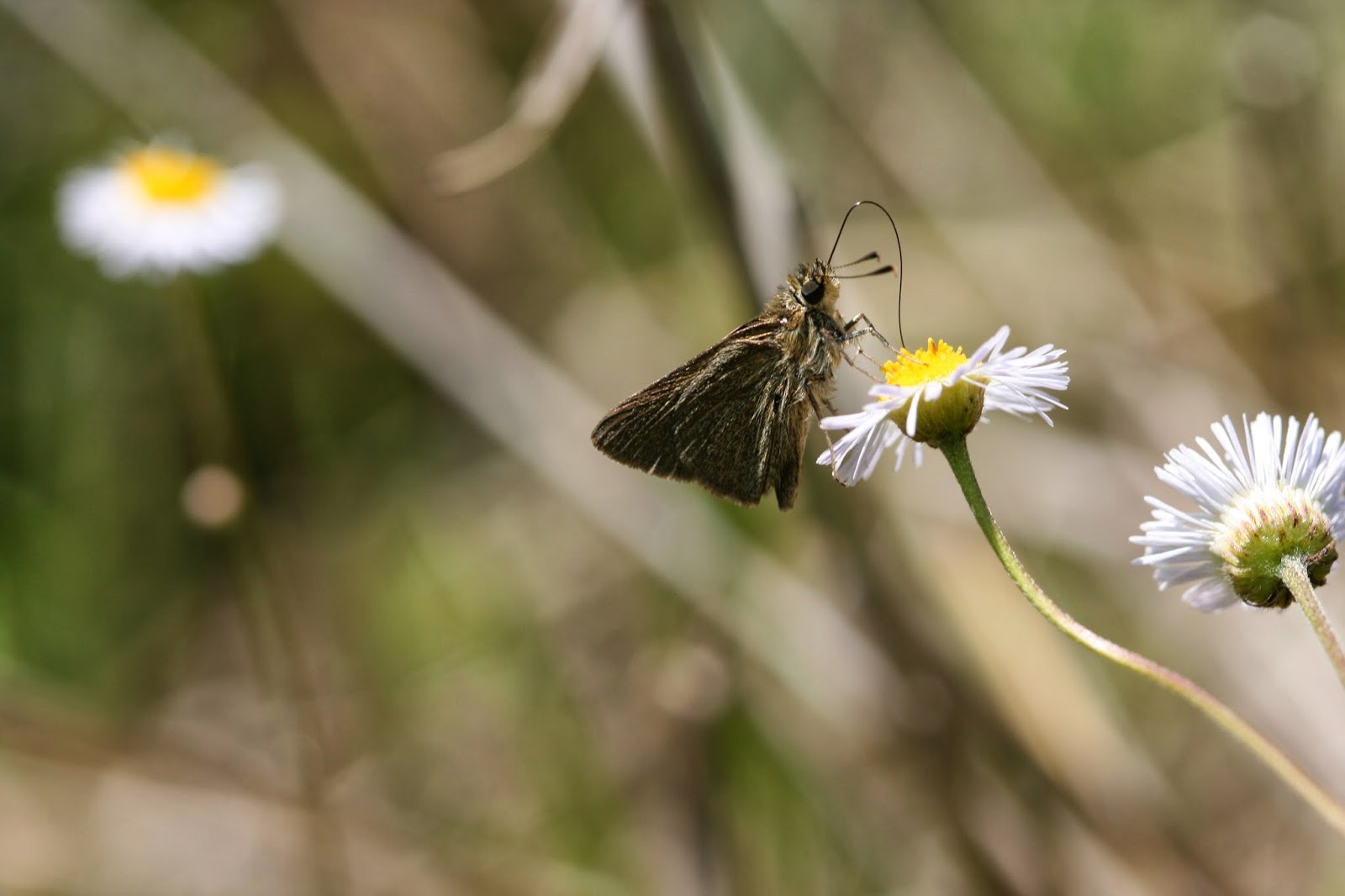 Daisy fleabane is sometimes sold commercially and can easily be propagated from seed collected in the late summer and fall.  It is not fussy as to growing conditions, but should not be grown in shade or in wet soils.  I find it to be a bit weedy, but can be attractive if used in mass with other wildflowers.

Posted by Hawthorn Hill at 3:35 PM No comments: 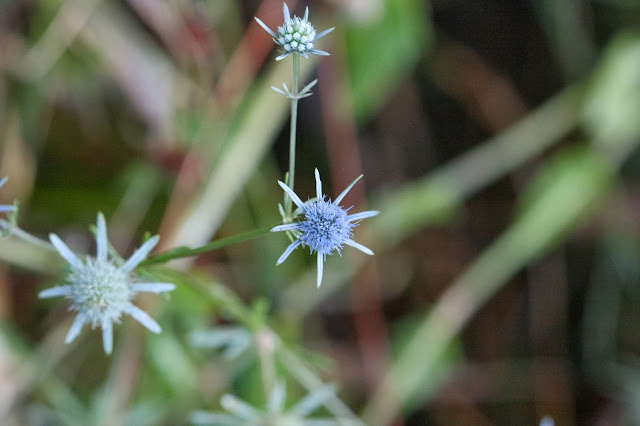 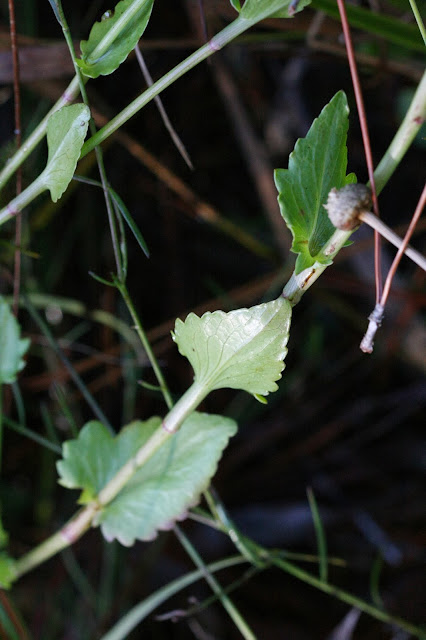 Blueflower eryngo (Eryngium integrifolium) is actually one of many "snakeroots" with blue button-shaped flowers.  It is also sometimes referred to as "bog eryngo" as it is most common in open wet prairies, savannas, and bogs.  This is a species restricted in Florida to the Panhandle counties and a few other counties in northeast Florida.  It is distributed outside of Florida in all the Southeastern states.
Bluefower eryno is easily distinguished from other species in this genus by its arrow-shaped leaves that clasp the main stem and are deeply notched along the margin.  It is a perennial forb.  The basal leaves can be up to 4 inches long and have stalks.  These are evident in early spring.  The main stem arises from these leaves shortly after. It is slender and reaches a mature height of 2-3 feet by summer. The stem produces multiple side branches near the top and the flowers are formed at the top of each.  These are about 1/2 inch across, rounded in shape, and composed of many tiny blue flowers.  Each flower head is subtended by long thin bracts that also are blue in color.
Eryngiums are in the carrot family and a few are used by the larvae of the Eastern black swallowtail butterfly.  Blueflower eryngo, however, has not been reported as one of those species and it is likely not a good candidate for a butterfly garden.  This species has never been offered for sale commercially by any nursery associated with FANN - the Florida Association of Native Nurseries.  Look for it in late summer in the same type of open wetland that you might find pitcher plants and grass pink orchids.
Posted by Hawthorn Hill at 8:13 AM No comments: