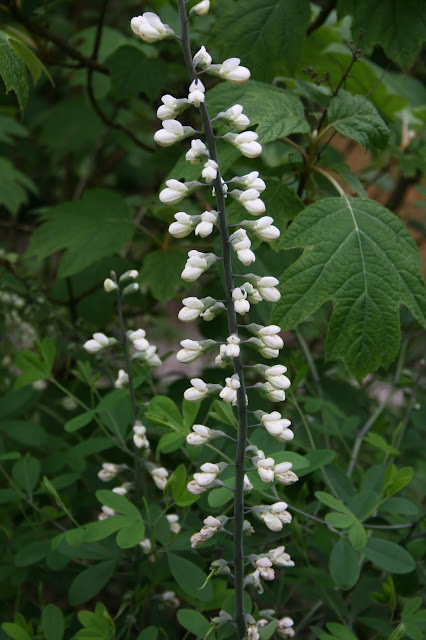 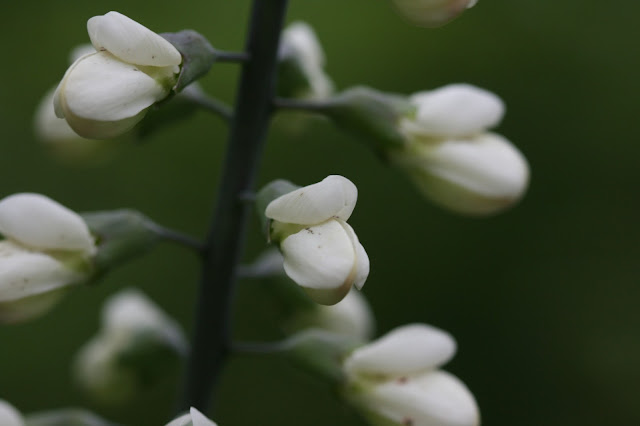 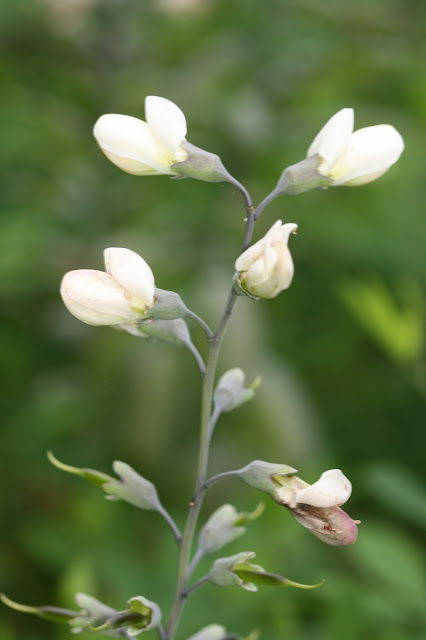 Wild white indigo (Baptisia alba)  is one of eight native species in this genus and one of two with white flowers. The other white-flowered species (B. albescens) has noticeably smaller flowers and narrower leaves. The flattened ripe seeds pods are black instead of brown. Wild white indigo is native to well-drained upland sites in much of the northern one-third of Florida and throughout the eastern half of the U.S.
Wild white indigo is a perennial sub-shrub that can grow to 3 feet tall from a stout main stem, 6 inches in diameter. It dies back to the ground in winter and emerges again in early spring. Like many members of the bean family, the leaves are three-parted. Each leaf is about 3 inches long and has a whitish cast on the upper surface.
Flowering occurs from late spring into summer. Many upright flower stalks are produced and they stand a foot or more above the foliage in very showy racemes. As the name implies, the flowers are creamy white in color with a pronounced lower lip and smaller upper petal. Each bloom is nearly 1 inch long. They are pollinated primarily by large bees. It also is the larval food plant for Zarucco and Wild Indigo Duskywing Skippers.
This species is the most widely propagated member of this genus in Florida and is available from a number of nurseries affiliated with FANN - the Florida Association of Native Nurseries. I have not had success with it in my central Florida landscape, but it is relatively easy within its more-northern Florida range if given well-drained sandy soils and at least a half day of sun.
Posted by Hawthorn Hill at 8:26 AM No comments: 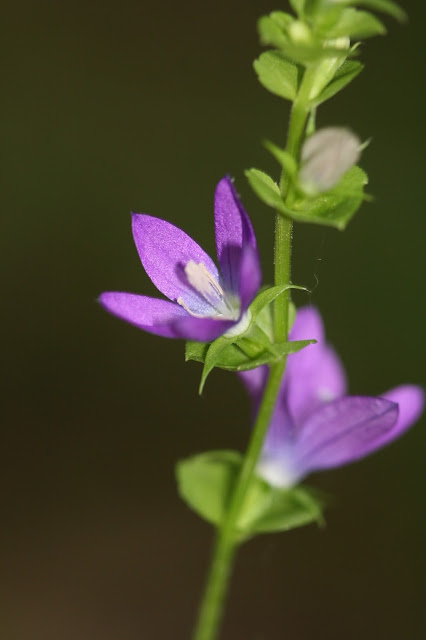 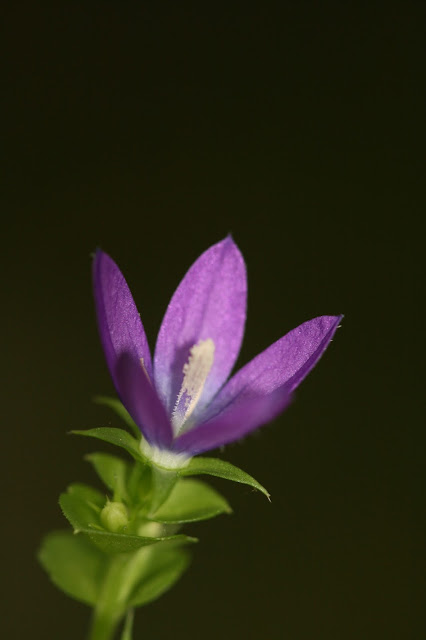 Venus' looking-glass (Triodanis perfoliata) is an annual member of the bluebell family (Campanulaceae) and common to disturbed sites and roadsides throughout the northern two-thirds of Florida and nearly all of Canada and the U.S.  Its natural range occurs south to Argentina and it is naturalized in China, Korea and Australia.
The common name likely refers to the shiny lens-shaped seeds which can act like a mirror, though they are too tiny to see without some magnification. The stem is unbranched and reaches a mature height of 6-12 inches by bloom time. The stem is deeply furrowed and lined with small white "hairs."  The leaves are alternate along the stem until they reach the top - where they become opposite each other. Each leaf is heart-shaped (chordate), lime green in color, slightly toothed along the margin and clasp the stem. Flower buds form (generally three in number) in each of the leaf axils.
Flowering occurs for about a month in late spring to summer. Though 1-3 buds are formed at each axil, only one is generally open at a time. The blooms are deep violet to purple in color, and quite attractive, though only about 1/2 inch in diameter. Each is composed of five petals which generally open more flat than the flowers pictured above. The throat is lighter in color and the white-colored, prominent reproductive parts emerge from the base. Pollinated flowers (though the lower ones generally are self pollinating - cleistogamous) ripen to brown seed capsules in early fall. Like other members of this family, they explode when ripe and scatter the many seeds away from the parent.
Though attractive, the annual nature and small stature of this wildflower limit its potential in cultivation. It is only rarely offered and difficult to maintain in a typical landscape setting. It thrives in poor soil and open conditions, and does not tolerate being overly crowded by other plants. It is recorded that the Cherokee Nation used a tincture made from its roots to treat stomach ache.


Posted by Hawthorn Hill at 7:44 AM No comments: