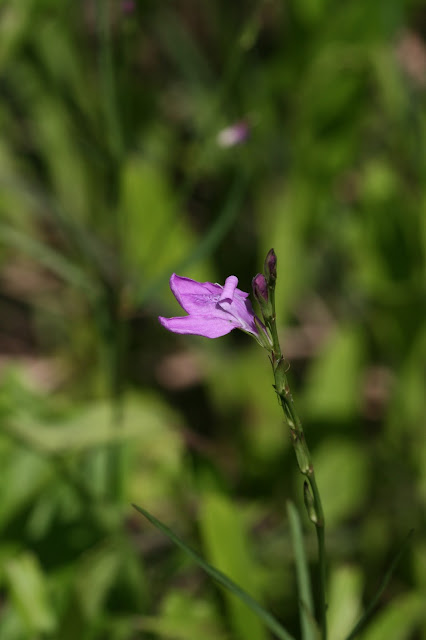 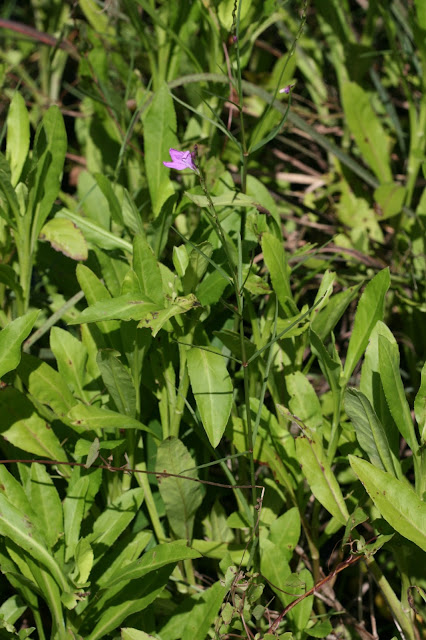 Pineland waterwillow (Justicia angusta) is not a pineland plant, but an obligate wetland one, common to open wet meadows in all of penisular Florida and a few counties in the panhandle. It also has been reported from two counties in southern Georgia. As such, it is a near-endemic of Florida.
Pineland waterwillow is a perennial forb that dies back to the ground in winter. It emerges in early spring and quickly produces a very slender stem that can stand 3-4 feet tall.  As the Latin name indicates, the leaves are exceptionally narrow. Pineland waterwillow often grows in shallow standing water, the stem standing several feet above the waterline.
Flowering can occur in most months from spring through fall. The photos above were taken 8 July 2016 in Corkscrew Swamp Sanctuary, Collier County. As is typical of this species, the flowers are solitary on the stem, but multiple blooms are produced during the extended blooming season.  Each is a rich pink to violet in color. The two small upper petals are curled backwards while the larger lower petals are slightly fused and form a broad 3-lobed lip.  The center of the lower petals is noticeably lighter in color and spotted with deep purple dots. The flowers are mostly visited by bees.
Pineland waterwillow makes an interesting addition to an open marsh planting, but it is not offered commercially by any of the nurseries affiliated with FANN - the Florida Association of Native Nurseries.  It's close relative, looseflower waterwillow (J. ovata) is reported as a larval plant for two crescent butterflies - the Seminole Texan and Phaon crescents. As the phaon crescent's range in Florida extends well south of the range of J. ovata, it may use J. angusta in south Florida.  This should be watched for and reported if it occurs.
Posted by Hawthorn Hill at 7:27 AM No comments: