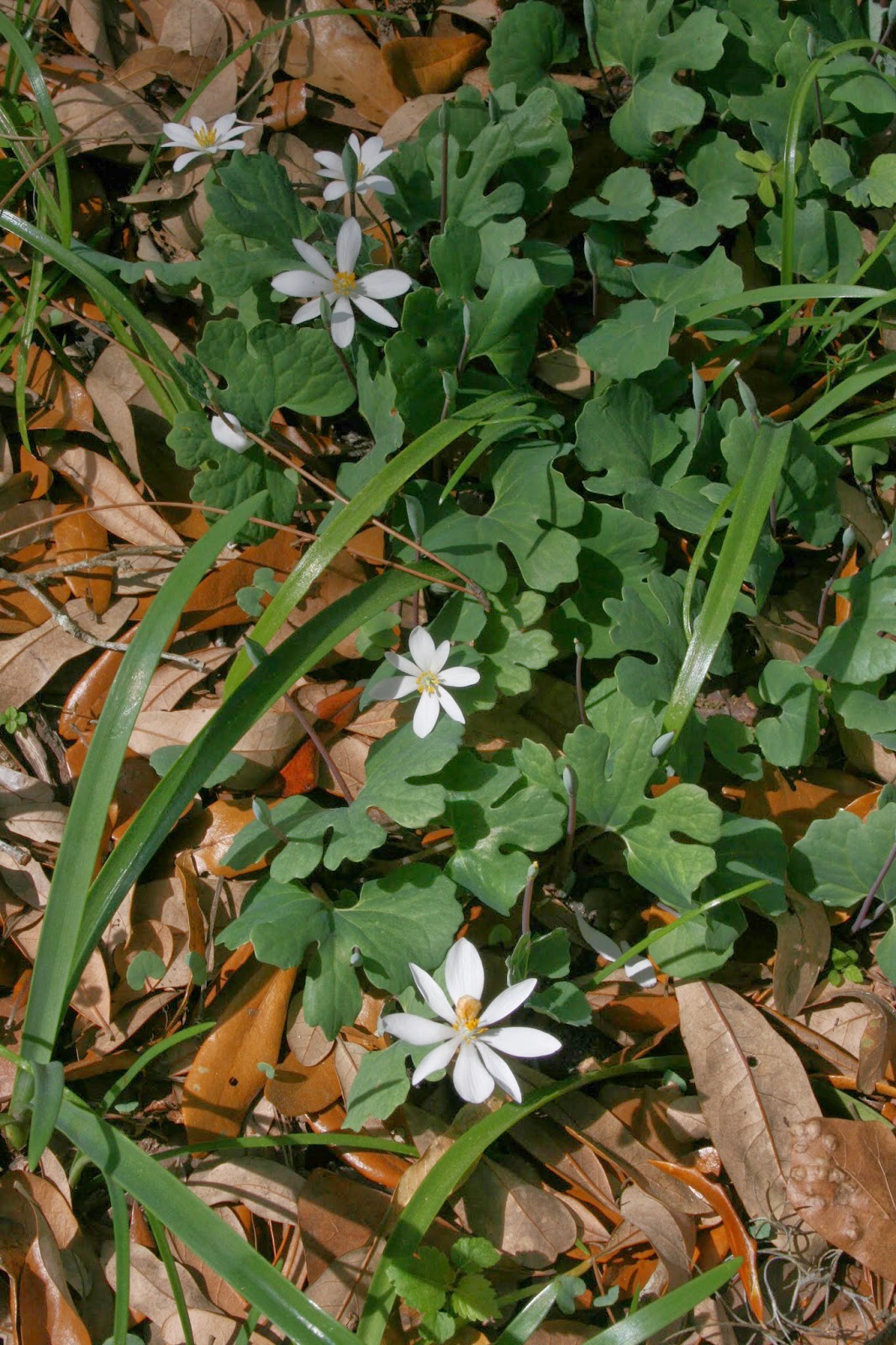 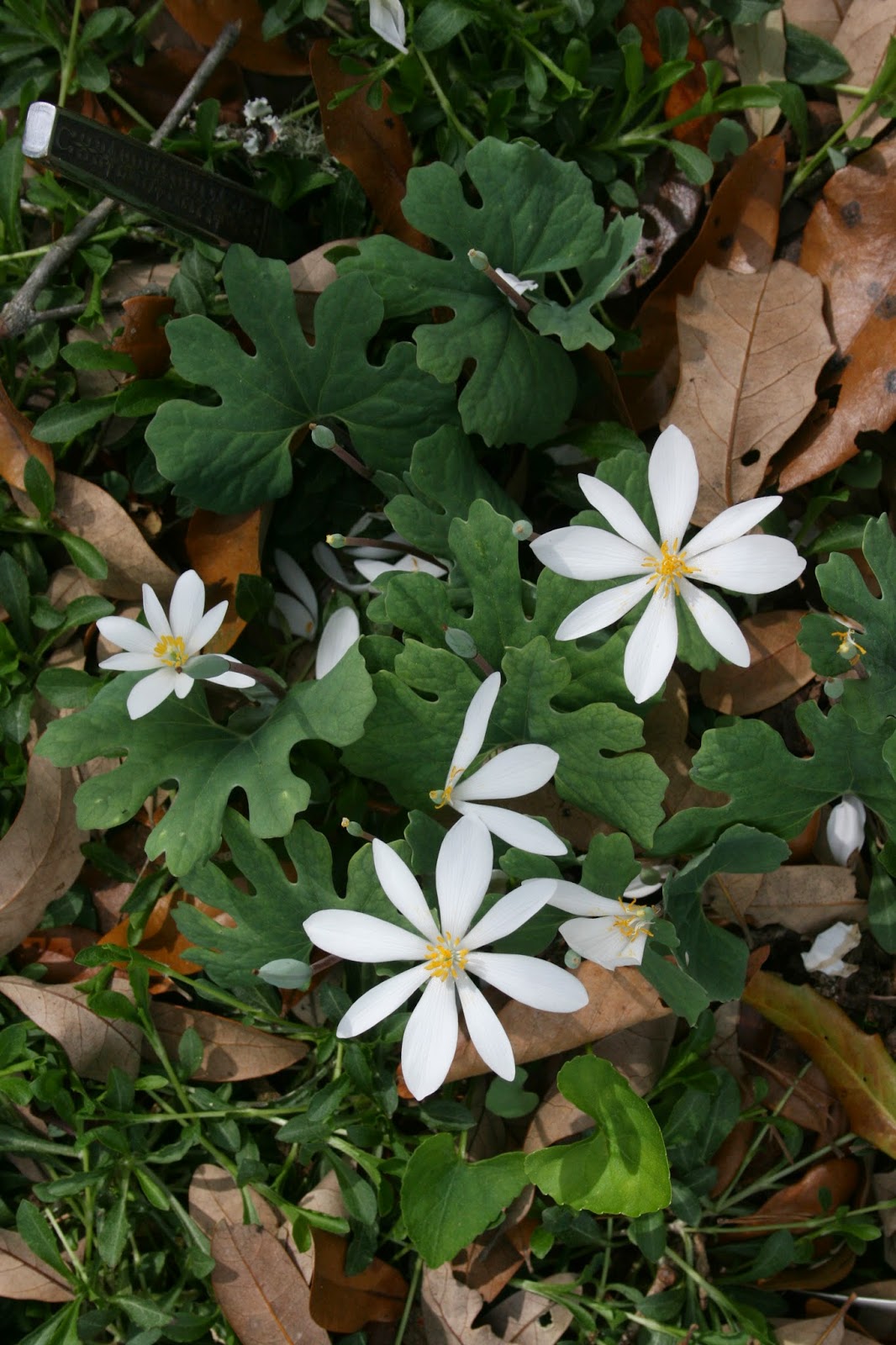 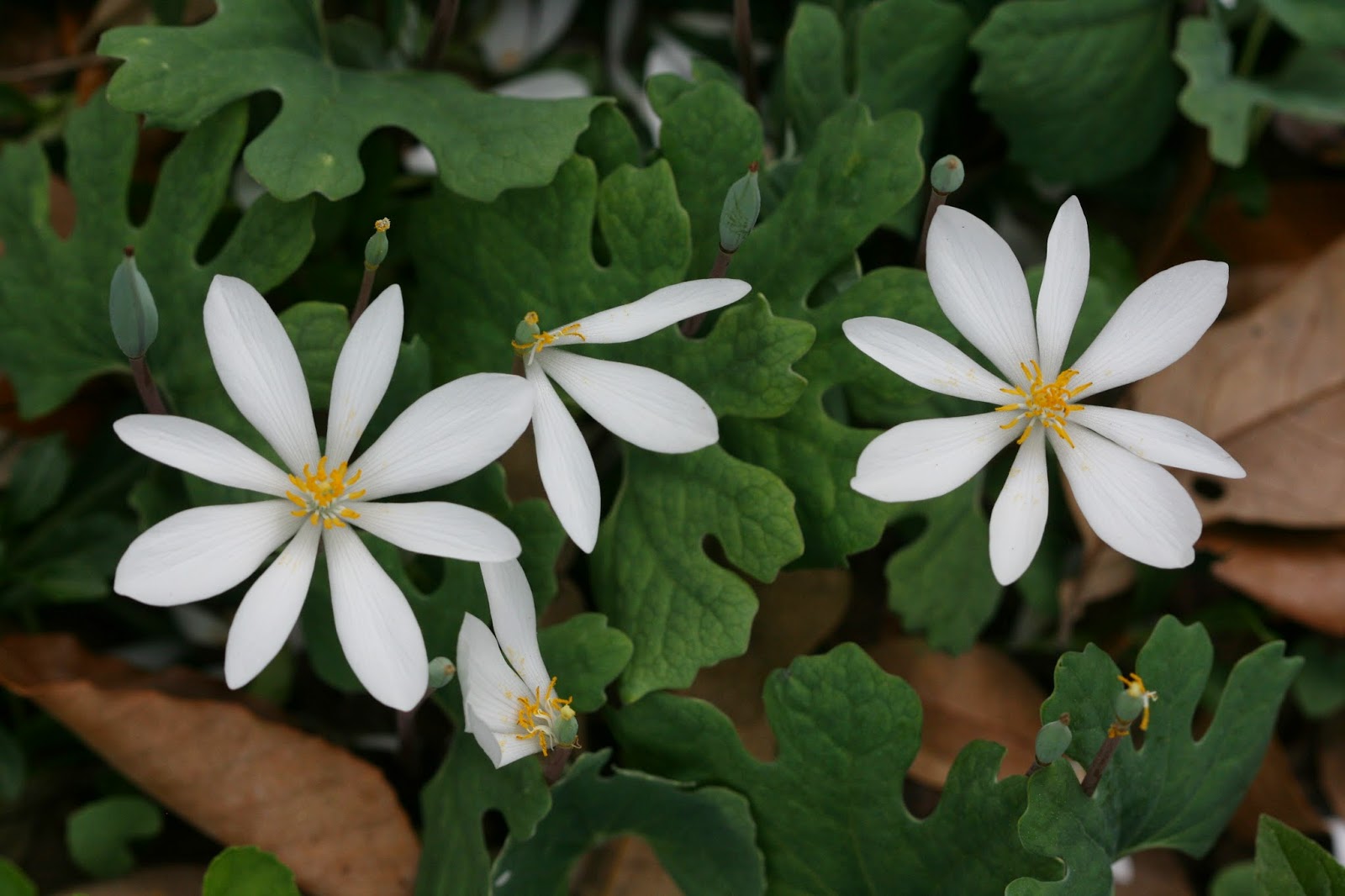 Bloodroot (Sanguinaria canadensis) occurs throughout the eastern half of North America, as far north as the southern tiers of Canadian provinces, but it reaches its southern limit in Florida.  Here, it is reported only from eight counties in the central Panhandle, largely in the understory of deciduous hardwood hammocks with relatively rich forest soil.  This is a classic perennial spring ephemeral wildflower - making its appearance in early spring before the canopy closes over, setting seed, and disappearing by early summer.
Bloodroot is impossible to misidentify. In late winter, its single palmate leaf emerges with its deeply dissected lobes and noticeable veins.  This leaf is often held nearly vertical to the ground and on a relatively long petiole; up to 6 inches.  Over time, plants sucker and produce clusters.
Flowering occurs in late February through March in its Florida range. The solitary bloom may stand 6-12 inches above the ground. The six, crystalline white petals surround the bright yellow reproductive parts; the flowers are about 6 inches across and quite beautiful. The flowers are primarily pollinated by bees and pollinated flowers form an elliptical seed capsule that ripens by April.
Bloodroot is so named because the stems and roots "bleed" a bright red juice when cut. This was used by Native Americans to dye clothes, skin, and pottery.  The plant was also used in herbal medicine and as an insect repellent.  The alkaloid compound, sanguinarine, is still commercially used in some toothpastes and mouthwashes to control plaque, however, this compound is also toxic and bloodroot should never be ingested.
Bloodroot is one of the sure signs of spring and makes a wonderful addition to a mixed wildflower meadow beneath a deciduous forest canopy.  It will not prosper in evergreen shade or in infertile sandy soils, not enriched by a good surface cover of decomposing leaf litter.  Because of its great beauty, it is propagated by several native plant growers in north Florida. Do not attempt this plant in Florida using plants from further north. We have grown it in our central Florida landscape by putting it in large pots with fertile potting soil. It has not survived being grown in our native sandy soil.  If you attempt it, try it with meadow rue, blue woodland phlox, trilliums, and rain lilies.
Posted by Hawthorn Hill at 5:56 AM 1 comment: 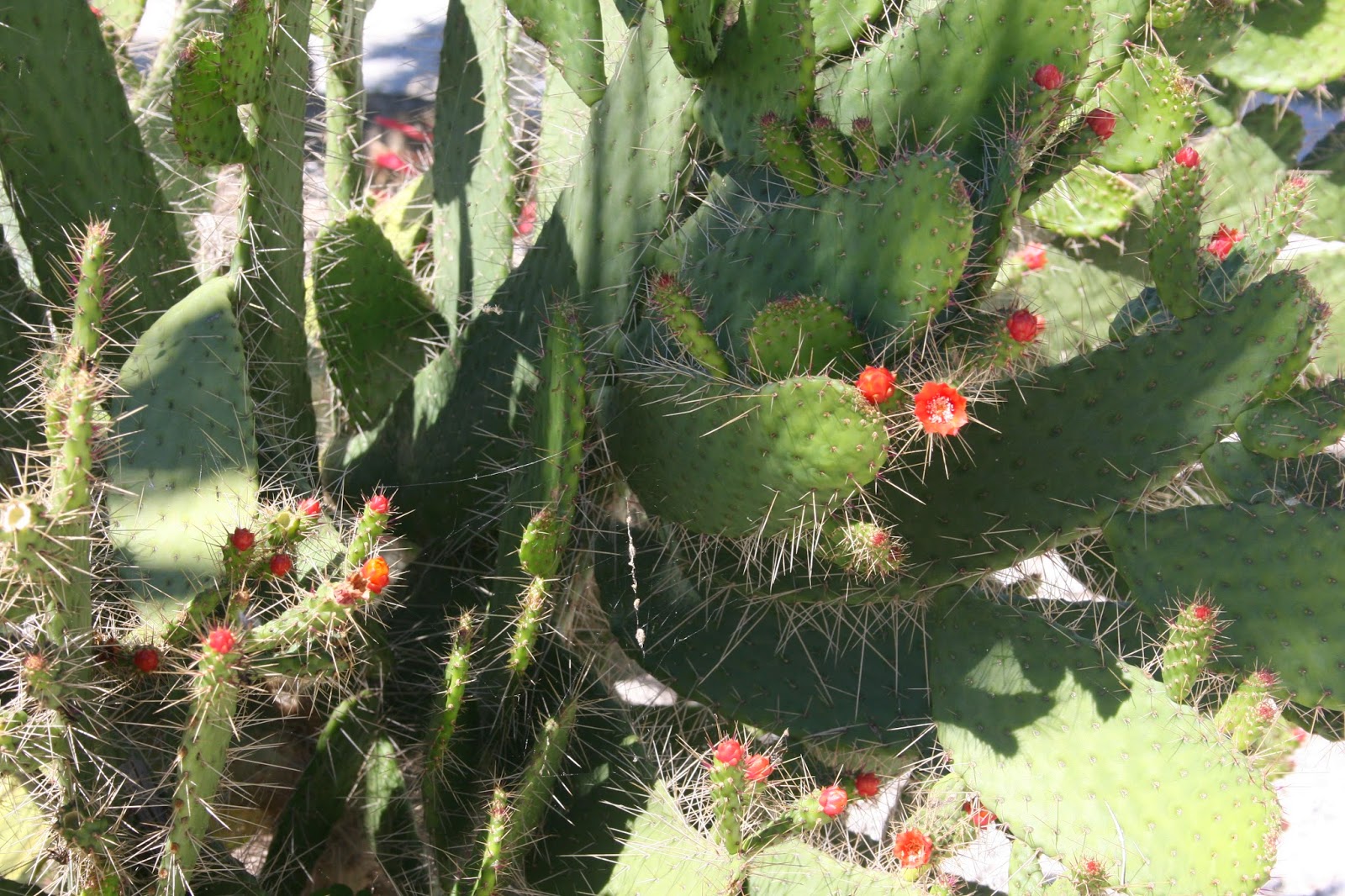 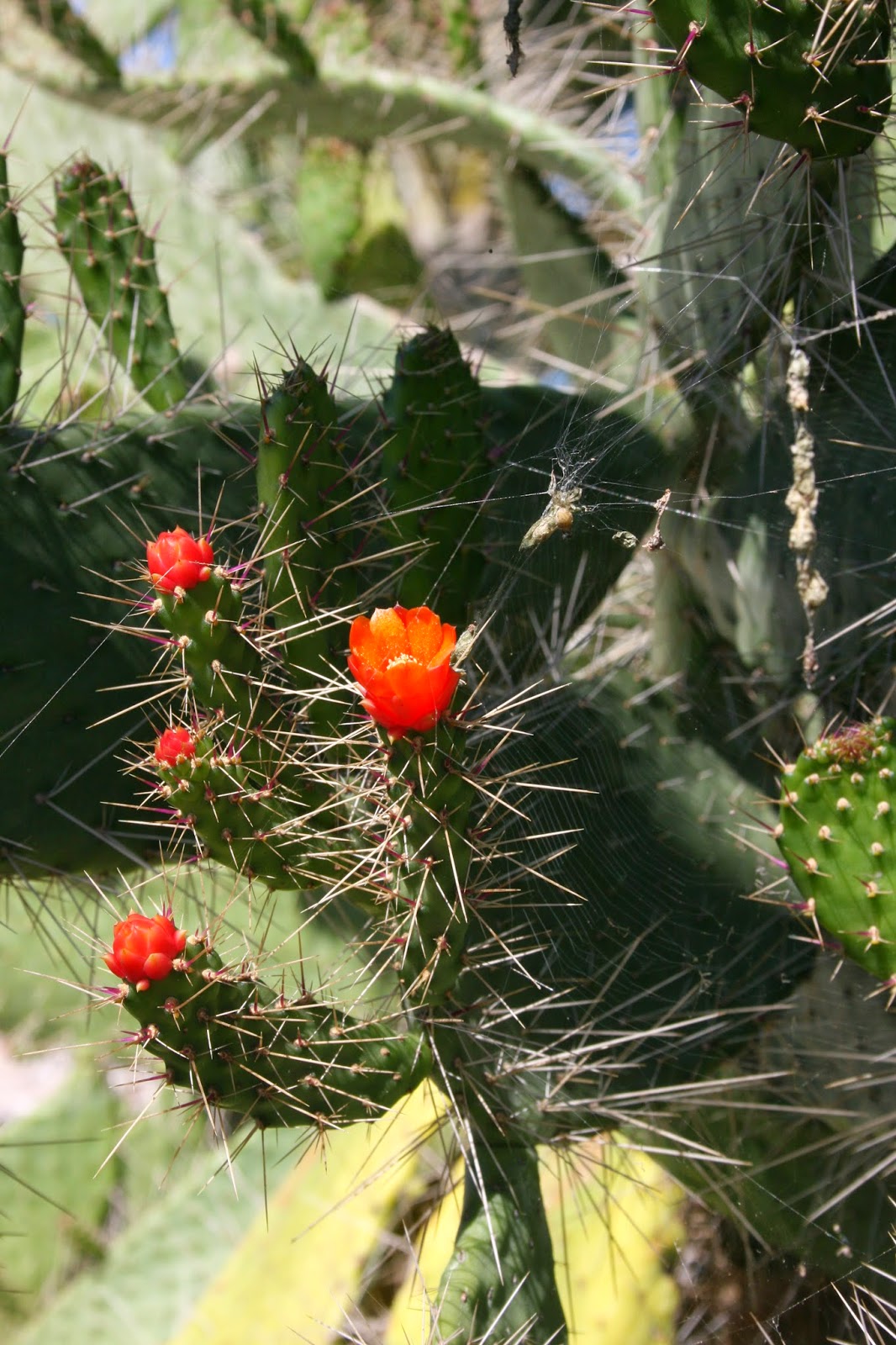 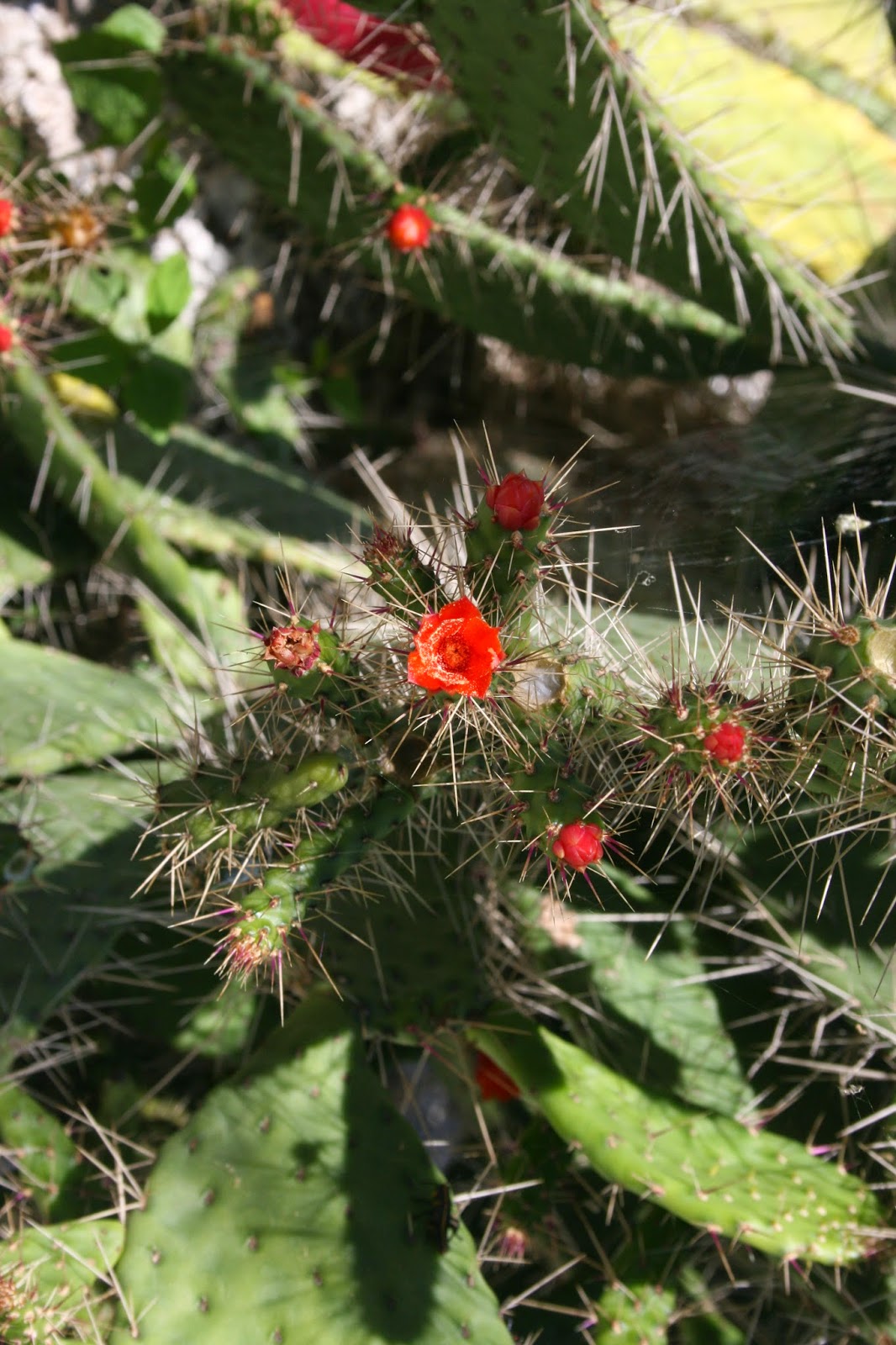 Semaphore cactus (Opuntia corallicola) is a very rare endemic species that is naturally found only on two islands in the Florida Keys; the largest population being located within Biscayne National Park. It is listed as a state endangered species. Though more than 500 plants should be considered safe as they are located within protected areas, this cactus, and other similar species, are threatened by an introduced moth that lays eggs inside the stems. The larvae of this moth burrow throughout the plant as they mature, and often kill the host by the damage they cause.  Its future seems to lie with the concerted conservation efforts underway to put specimens in areas protected from the moth.  This plant was photographed at the Naples Botanical Garden.
Semaphore cactus occurs in open areas within tropical hammocks of the Florida Keys.  It is erect and can reach mature heights of six feet.  The plants assume an irregular form as the pads (cladophylls) align themselves mostly on one plane. Each is oblong in shape and nearly one foot long when mature.  Like other members of this genus, they are covered by stout spines.
Flowering occurs throughout the year. They are a bright orange in color with contrasting yellow stamens. Each bloom is about 1/2 inch long.  The pollination of this plant is unknown and fruit have not been seen. Currently, reproduction is known only by asexual means - the pads break off, root, and form new plants.
Semaphore cactus is both beautiful and interesting, but its future is imperiled.  Hopefully, conservation efforts currently underway will be successful and this species will continue on into the future.
Posted by Hawthorn Hill at 6:39 AM 4 comments: 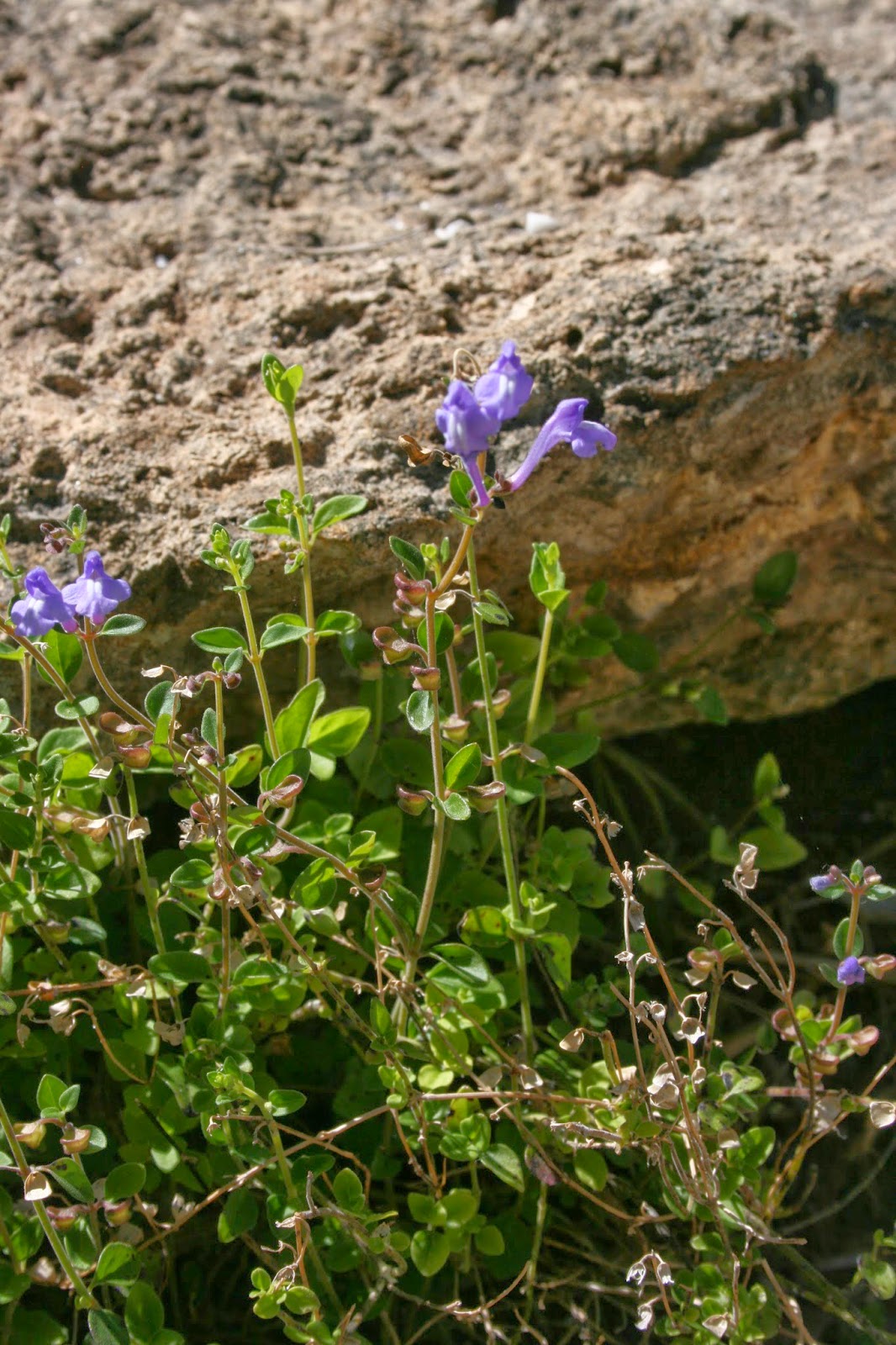 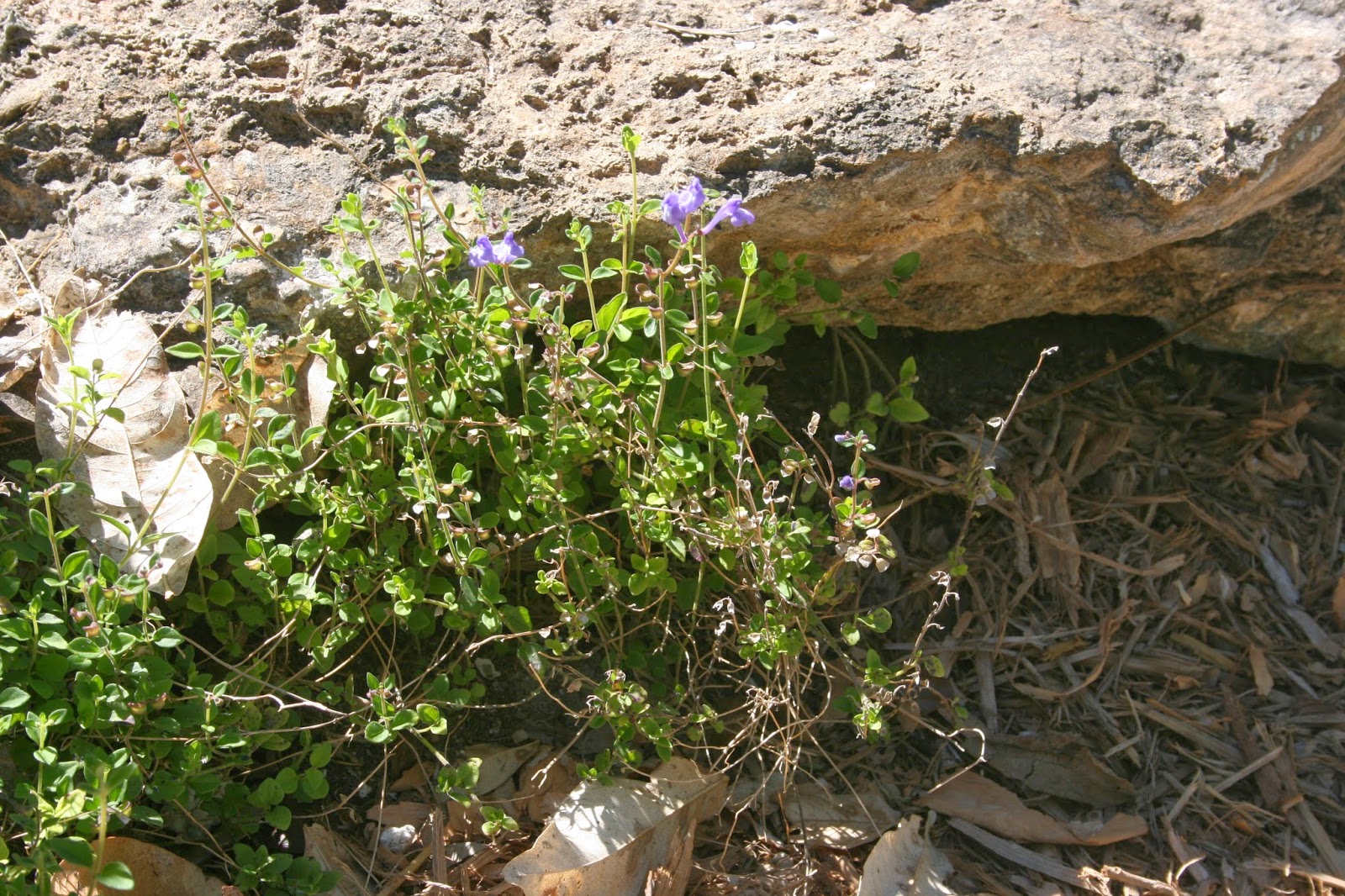 Havana skullcap (Scutellaria havanensis) is found naturally in Florida only in Miami-Dade County and is listed as a state endangered species.  It is not a Florida endemic, however.  As its Latin name suggests, it occurs elsewhere, in the Caribbean, on such islands as Cuba, the Bahamas, and Puerto Rico.  In its natural range, it is found in well-drained pine rocklands. The plants above were photographed at the Naples Botanical Garden on March 8.
I do not have any cultural experience with this wildflower and what I know comes largely from the writings of South Florida's renowned ecologist, Roger Hammer, and from the observations I was able to make while touring the Gardens.  Havana skullcap is a distinctive member of this popular and widely dispersed genus, and it would be difficult to confuse it with other Florida skullcaps.  As a tropical, this perennial remains green and blooms throughout the year. The exceedingly slender stems are covered with tiny hairs that are visible on close inspection. Each stem stands no more than 12 inches tall and the ovate leaves have entire margins (no teeth) and are about 1/2 inch long.  The plants sucker, as do other members of this genus, and eventually established plants form mats.
Blooming can occur in every month if winter temperatures remain above freezing.  They have the typical skullcap shape, but are a deeper blue than many and make quite an attractive statement in the landscape.  Skullcaps are most typically pollinated by bees, but I did not observe pollinators around these plants at the time of my visit.
Havana skullcap seems to possess all the attributes that should make it an excellent candidate for a sunny wildflower garden in areas of Florida that do not regularly freeze, ,and it has recently been added to the list of native plants offered for sale by nurseries affiliated with FANN - the Association of Florida Native Nurseries.  Use it in sunny to mostly sunny areas in well-drained soil near the front of the bed and the edge of trails and walkways.
Posted by Hawthorn Hill at 7:22 AM 3 comments: