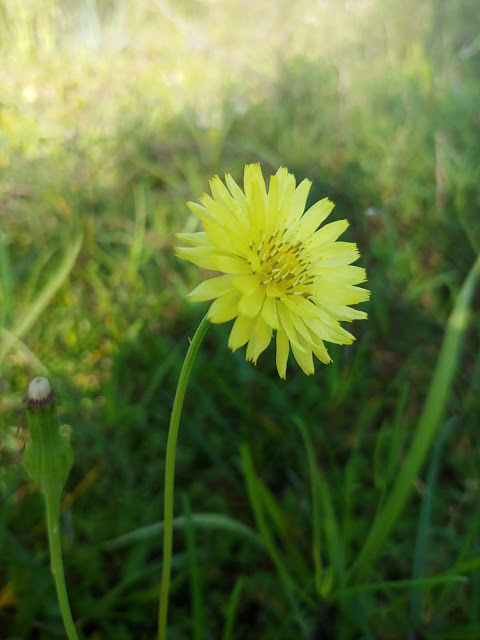 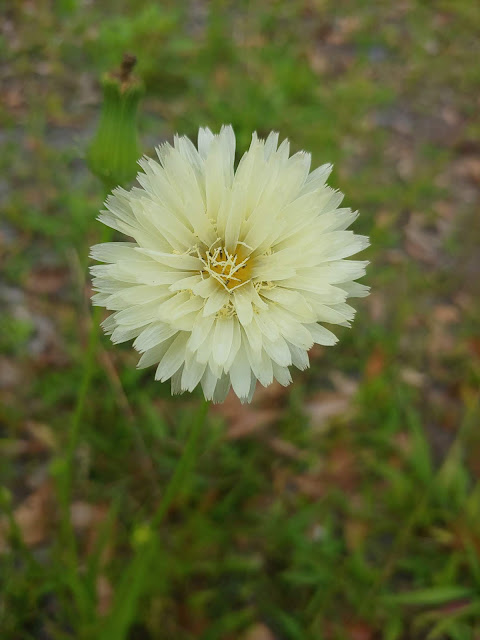 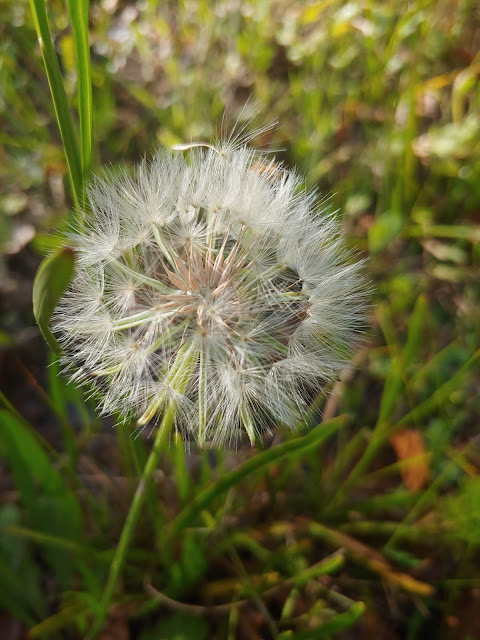 There are a great many plants here in Florida that are mistaken for dandelions (Taraxacum officinale) and this is one of them. Carolina desertchickory (Pyrrhopappus caroliniensis) may be a poor substitute name as well as it is neither a "chickory" nor does it occur in the "desert". It is, however, an annual member of the Asteraceae and found throughout the northern two-thirds of Florida in open disturbed sites such as roadways and fields. It also occurs in much of the same types of locations in the eastern half of the US, except the very northernmost line of states.
Carolina desertchickory makes its appearance in the spring as a basal rosette of lanceolate leaves, each about 5 inches long. Some leaves may be deeply lobed, especially near the base, but in others these lobes may be nearly absent. The plants photographed here have leaf margins that are essentially entire.
Flowering occurs in late spring through late summer. The flowers are produced on a flower stalk that stands up to 1 1/2 feet tall.  The flower heads are large and showy; measuring slightly more than 1 inch across and composed of many ray petals.  The typical color is a bright canary yellow, but lighter shades, such as in the middle photograph, are not uncommon. These flowers are of interest to small bees. Once pollination has occurred, the seed heads mature quickly into "dandelion"-type fluffy seed balls.  These are much larger than those found in dandelions and the seeds themselves may measure 1/8 inch in length.
Roger Hammer reports that members of the Cherokee Nation used this plant medicinally as a blood "cleanser" and that its roots have also been eaten as a vegetable. Some caution, however, should be taken in eating wild plants for the first time.
Although I find this native wildflower to be quite attractive, its somewhat weedy nature and the fact that it is an annual make it a poor candidate for the horticulture industry. It is easy to propagate from seed, but it would need to be able to reseed into open soil to persist.
Posted by Hawthorn Hill at 4:26 AM No comments: 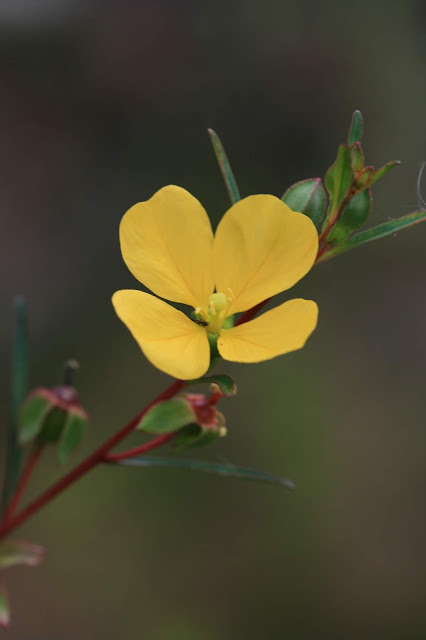 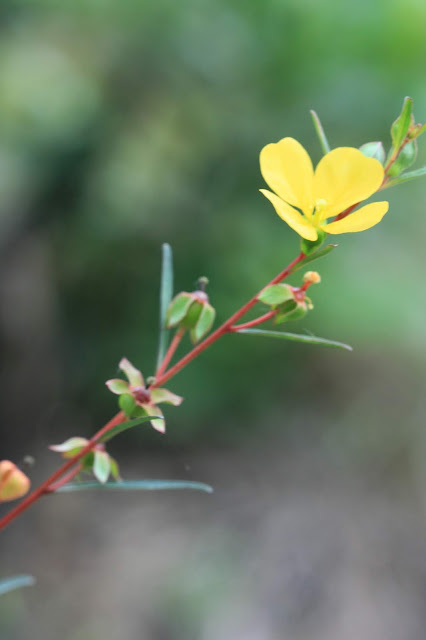 Despite its common and Latin names, seaside primrosewillow (Ludwigia maritima) is not restricted to coastal habitats and occurs throughout Florida in moist areas including wet prairies and pine flatwoods. These photographs were taken in a moist area within pine flatwoods in north Pinellas County. Seaside primrosewillow also occurs in much of the Southeastern Coastal Plain from Louisiana to North Carolina.
Florida has a great many native and nonnative primrose willows, making identification sometimes a bit difficult. This species reaches a height of about 2 1/2 feet and has a slender aspect with few side branches. The stems are reddish with coarse hairs and the leaves are willow-like, alternate on the stem, and several inches long. It is perennial, but typically dies back to the ground in winter and re-emerges in early spring.
Blooming occurs from late spring through late fall. Like most species in this genus, the flowers are composed of 4 bright yellow petals. Each petal is quite rounded and the entire flower is about 1 inch across. They occur in the axils of the stem and seem to be of special interest to bees - especially bumblebees. Once the flowers are pollinated, the decidedly rounded seed capsules form.
Primrose willows as a group often seem to get a bad rap due to their highly invasive relative Peruvian primrose willow (L. peruviana). This is a shame as many of our native species are well behaved and attractive in their own right. I think seaside primrosewillow is definitely one of the handsomest. It would be easy to propagate from seed collected after the seed capsules turn brown. 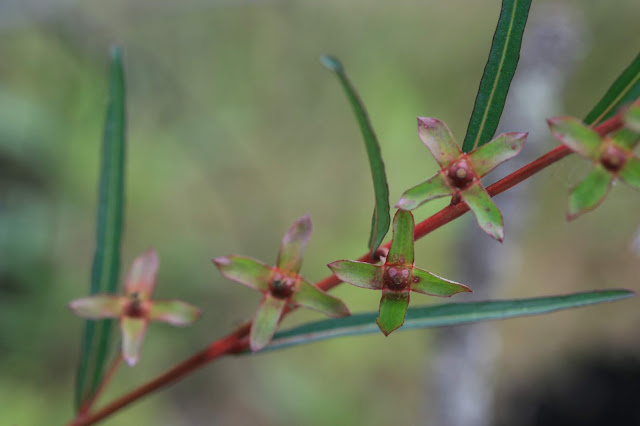 Posted by Hawthorn Hill at 1:35 PM No comments: 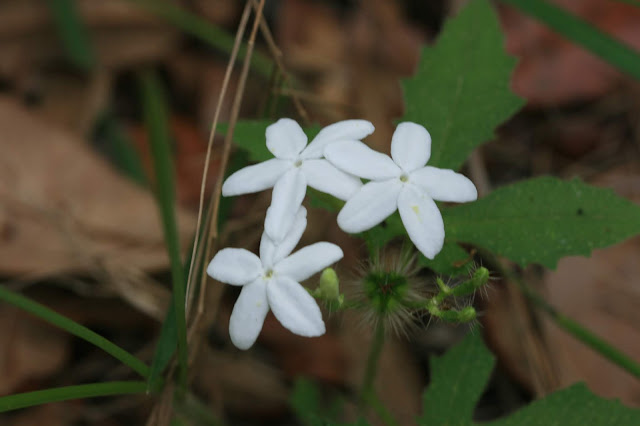 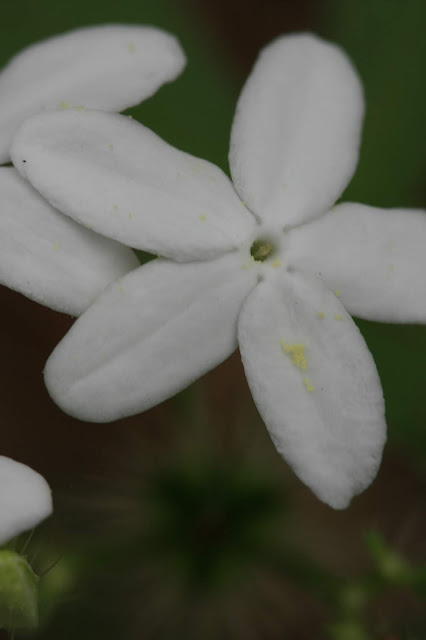 Tread softly, aka stinging nettle, (Cnidoscolus stimulosus) is a common wildflower in open habitats throughout Florida and in much of the Southeast. It forms a low mass of vegetation that normally does not exceed 8-12 inches in height and about the same in width. It is a perennial that remains green in the central and southern thirds of Florida, but dies back to the ground in areas with hard freezes. It is in the Euphorbia family, but unlike many, has showy petals and is monoecious.
Tread softly has leaves with deeply dissected lobes. They somewhat resemble maple leaves in aspect, but the surface is covered with stiff stinging hairs. Brushing against this plant, or worse - picking the flowers, will result in sharp pain that can last for hours. Like the true stinging nettle (Urtica dioica), these hairs are trigger loaded, and they are actually injected into its victim's skin. You can lessen the time your skin will burn by removing those hairs - which can be done by placing an adhesive tape on the spot of contact and pulling the tape up.
Though this is not a wildflower one should consider adding to a landscape, it has beautiful white fragrant flowers and it remains in bloom throughout the frost-free months. The flowers have 5 petals with a deep inner tube that holds nectar and attracts butterflies. Each bloom is about 1/2 inch wide.
This is a wildflower you should learn and respect when outdoors hiking. Then admire it from a short distance.
Posted by Hawthorn Hill at 1:09 PM No comments: 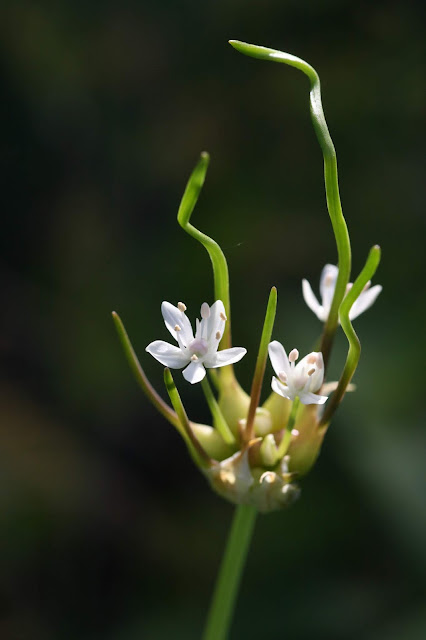 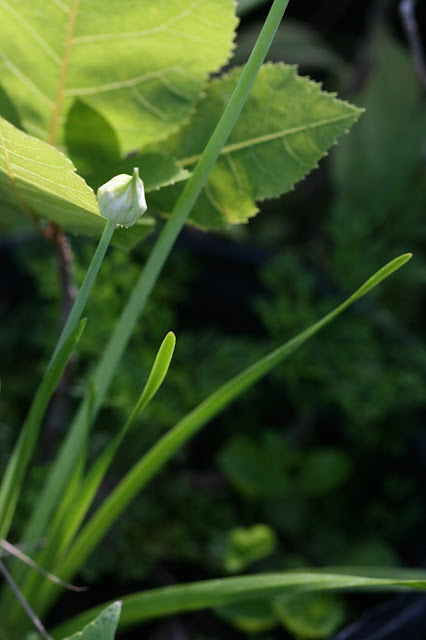 Meadow garlic (Allium canadense) is a perennial herb that is found throughout north and central Florida in open habitats ranging from pine savannas to disturbed fields. It also is found throughout the eastern US from North Dakota in the north to Texas. A member of the amarillis family, it grows from a bulb and produces its fragrant foliage in a whorl from it. Meadow garlic makes its appearance in the spring and tends to die back to the ground after it blooms and produces its tiny bulblets in the summer.
The foliage consists of succulent strap-like leaves that resemble those of its common garden relatives - onions, garlic and chives to name a few. Like its relatives, these leaves give off a strong odor of garlic, especially when crushed, and can be used in cooking. The leaves are 6-12 inches long by maturity.
Flower stalks rise from the center of the plant in spring. The blooms range from a soft pink to bright white, like the ones in this photograph. They are visited by small bees and butterflies. Pollinated flowers produce seed heads containing tiny seeds. What makes this plant unique among most of our native wildflowers is that the flowers are surrounded by small bulbs that are produced vegetatively. These drop to the ground once the flower stalk is fully mature and produce new plants near the base of their parents.
Meadow garlic is a fun plant to grow in a garden - especially in one devoted to permaculture. Plants require very little extra care and do well in most typical upland spoils and sunlight. Care must be taken, however, to mark the areas in which it is planted as it seems absent for about half the year. This wildflower is rarely offered for sale by members of FANN - the Association of Native Nurseries, but once acquired, it is easy to propagate. It also spreads over time if given a space where it is not disturbed too often.
Posted by Hawthorn Hill at 10:43 AM 1 comment: