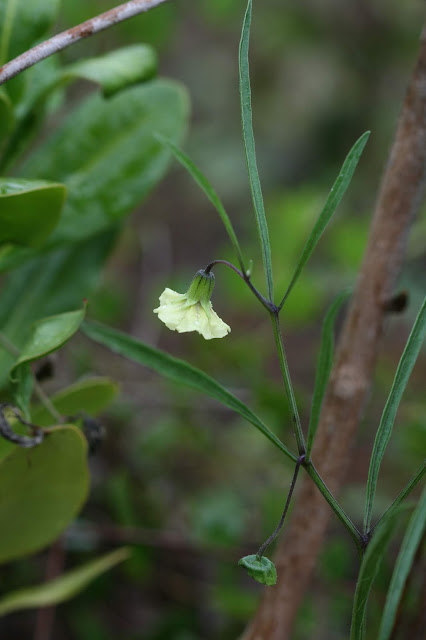 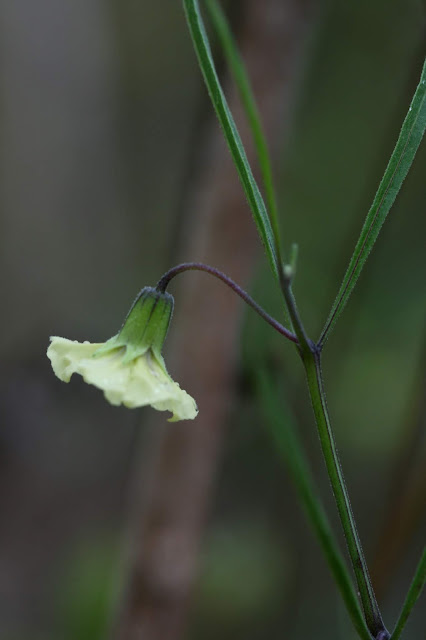 Florida is home to 9 native groundcherries, also known as tomatillos and relatives to tomatoes (Solanum spp.). Coastal groundcherry (Physalis angustifolia) is found throughout Florida in mostly coastal counties and several other states in the Southeastern Coastal Plain - Alabama, Mississippi, and Louisiana.  It is most common at the edge of hammocks and pinelands, though it is not especially picky about habitat.

Coastal groundcherry has distinctive foliage. The leaves are narrow and 2-4 inches in length. On closer examination, it can be seen that they also are covered with sparse "hairs".  The leaf margins are without teeth.  This is a perennial and remains evergreen in south Florida, but dies back to the ground further north.  At maturity, the plants stand 1-2 feet tall.  Flowering can occur throughout the growing season,  The pendant solitary yellow blooms are trumpet shaped and a bit less than 1-inch in length.  Like other members of the genus, the ripened fruit (a small tomatillo) is enclosed in a papery lantern-like structure (the calyx). The fruit are yellow when ripe. They are eaten by a variety of wildlife and are edible for humans as well.

With the increased interest in permaculture and in edible landscapes in general, a few members of this species are being cultivated by members of FANN - the Florida Association of Native Nurseries. Walter's groundcherry is currently listed by Silent Natives in Miami and by Sweet Bay Nursery in Parrish.  Groundcherries are relatively easy to cultivate and they will spread from their fruit if allowed to ripen and fall to the ground.  Give the plants a mostly sunny location and average moisture.


Posted by Hawthorn Hill at 6:48 AM No comments: 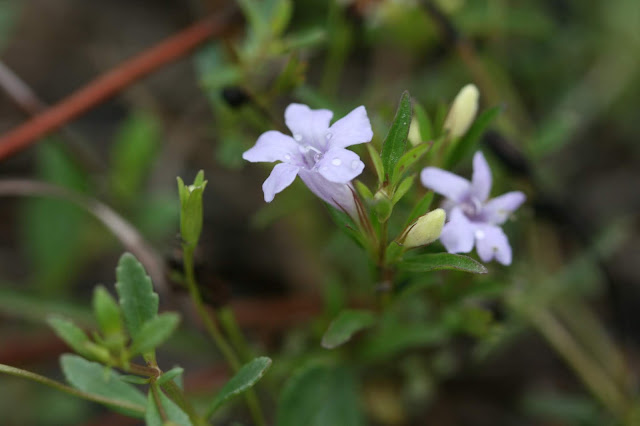 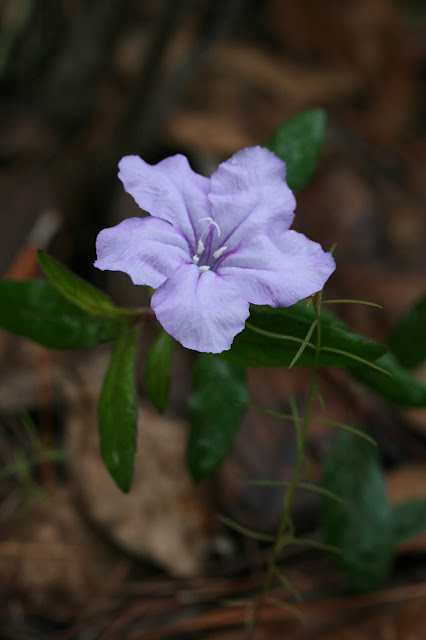 Nearly everyone in Florida who has a wildflower garden is familiar with wild petunia (Ruellia caroliniensis). There are other species in this genus, however, and I have featured a few of them previously in this blog. Thickleaf wild petunia (R. succulenta) is yet another.  Thickleaf wild petunia is a Florida endemic and confined to five counties in extreme south Florida. In this region, it is relatively common - occurring in pine rockland and flatwoods.

As its common name implies, its foliage is thicker and more succulent than others in this genus. The 1-3" leaves are opposite on the 4-8" stems and elliptical in shape. The margins are shallowly lobed as well and covered by short hairs.  All of this makes this species quite distinctive in relation to its more common cousins.  In south Florida, it is an evergreen perennial. The purple flowers are similar to other Ruellias - tubular and about 1- 1 1/2 inches wide.  Flowering in south Florida can occur year round. In its south Florida range, thickleaf wild petunia serves as a larval host plant for the common buckeye and the malachite butterfly. This would not be the case if this plant was used in more-northern parts of the state.

Despite the great popularity of R. caroliniensis, other species in this genus are not propagated by members of FANN - the Florida Association of Native Plant Nurseries.  The lack of propagation interest is even more surprising given that this species is also a larval host for two beautiful butterflies.  I have not grown this species and do not know its cold tolerance. I suspect it would be easy to propagate from seed, should you have access to plants and a legal ability to collect the seed.  Ruellias have seed capsules that "explode" when fully ripe.  Collect them when they start to turn brown and keep them in a covered container or bag. You can actually hear them explode in this situation.  Take the seed and sow it shallowly. Germination should be apparent in 1-2 weeks.


Posted by Hawthorn Hill at 6:23 AM No comments: 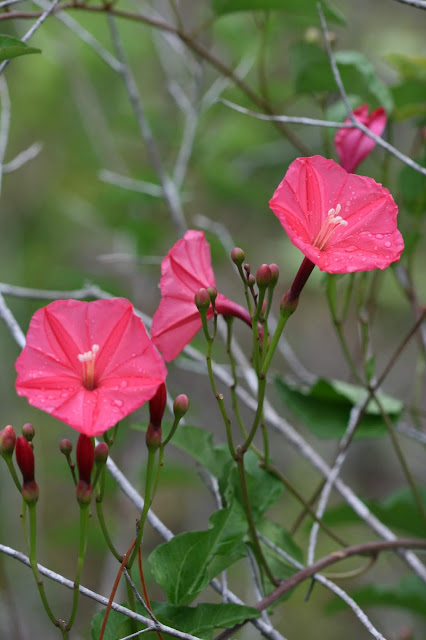 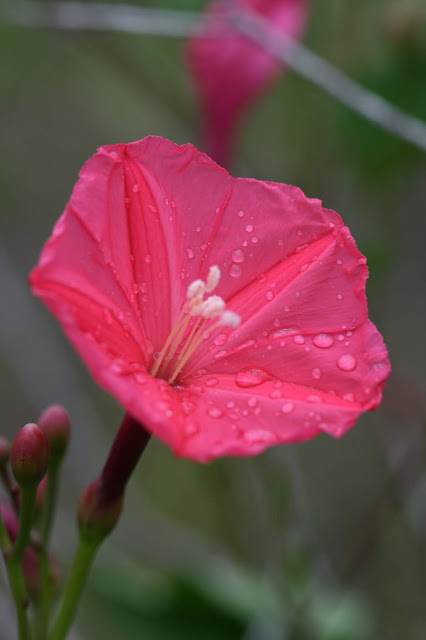 Man-in-the-ground (Ipomoea microdactyla) is one of the most striking of our native morning glories and one of the rarest. It is currently only known from pine rockland habitats in Miami-Dade County and is listed as a state endangered species. It also occurs on Puerto Rico.

Man-in-the-ground is so named (and the Latin name implies it also) because the large tuberous root has small finger-like projections.  Like all members of this genus, it is a sprawling vine that ranges many feet out from the central core. The ovate leaves can be entire or palmately lobed. Each is 3-4 inches in length.  What separates this species most obviously from our other nearly 2 dozen species is the rich carmine-pink color of the blooms. The deeply tubular flowers are about 1 1/2 inches wide and many buds are produced along the stems and can be open at any one time. Flowers are possible during most months from spring to early winter. They are visited by a variety of pollinating insects.

Despite its showiness, this species is not generally cultivated by any of the nurseries associated with FANN - the Florida Association of Native Nurseries. It is sometimes available from other south Florida hobbiests. If you find a specimen from someone (collected legally, of course), give it lots of room to ramble, full sun, and average soil. I do not know if it requires soils with high pH, but that is the habitat is occurs naturally in. 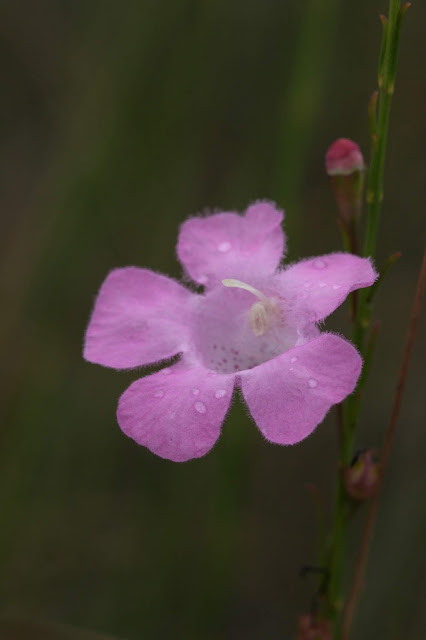 The genus Agalinis contains 17 native species and can be a very difficult genus to identify individual species. One way to narrow down the possibilities is to use habitat first - does it occur in wet to dry soils, and in what part of the state is it located.  Flaxleaf false foxglove (Agalinis linifolia) is one of several species found in seasonally wet habitats such as wet prairies and open marshes and it is found nearly statewide in such conditions. It also is found across the Southeastern Coastal Plains from Louisiana to Maryland and Delaware.

As the common and scientific names suggest, it is characterized by having very narrow leaves (similar in appearance to flax) that may be 1-2 inches long.  These are appressed against the stem and not especially noticeable at first glance. Multiple stems arise from the base and are sparsely branched.  They can reach 3 feet in height, depending on the density of the adjacent vegetation.
False foxgloves get this name from the general similarity of their flowers to real foxgloves - genus Digitalis. All members of this genus are pink in color and most have darker purple spots inside the throat.  Flaxleaf false foxglove is no exception, but its flowers are large for the genus - up to 1 inch across, and the petals are noticeably "hairy" along the edges. Blooming is most common from summer to late fall. They are pollinated mostly by bumblebees and other large bees.

False foxgloves are semi-parasitic on the roots of other plants. As such, they are not easy candidates for home landscapes and are not currently being propagated by any of the nurseries associated with FANN - the Florida Association of Native Nurseries. There has always been a demand, however, as this genus is the larval host plant for buckeye butterflies. If you wish to try your hand at this species, look for the dry seed capsules in fall to early winter and scatter them directly into a moist-to-wet mixed/established wildflower meadow. If you are successful, you should notice seedlings the following spring.
Posted by Hawthorn Hill at 11:03 AM No comments: 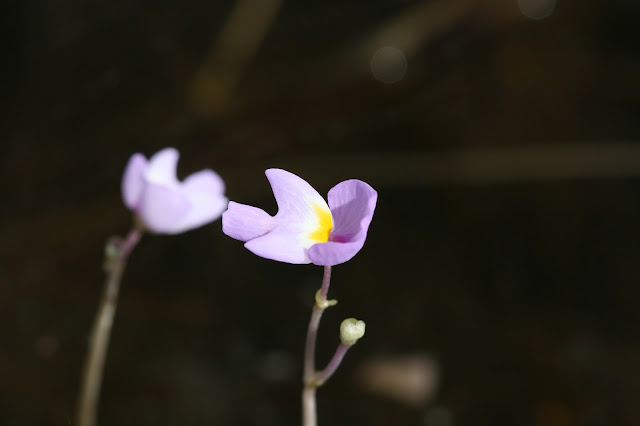 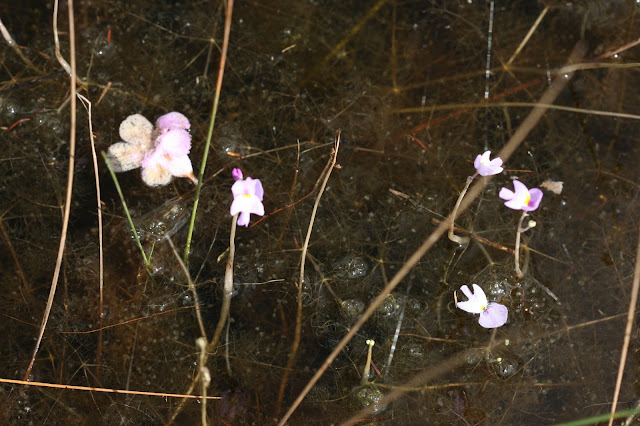 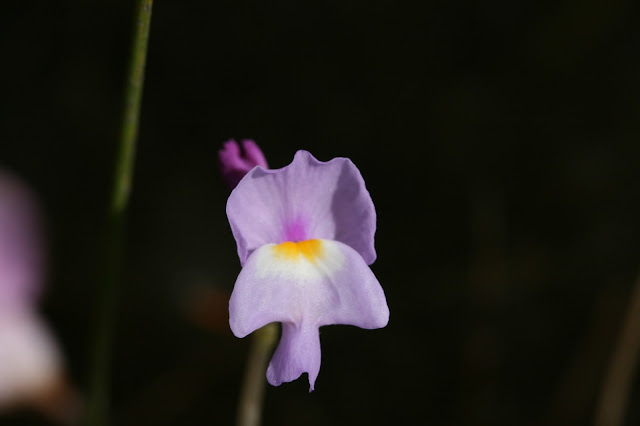 Bladderworts are semi-carnivorous plants that use their tiny bladder-like "traps" at the ends of their threadlike stems to capture small aquatic animals such as insects and nematodes to supplement their diet. These traps are exceedingly responsive to touch and close quickly to snare their prey.  Purple bladderwort (Utricularia purpurea) is an aquatic species found statewide in shallow freshwater habitats such as pond and marsh edges. It has a wide distribution in North America and is found in most states and provinces east of the Mississippi River north to Quebec, Newfoundland, and Labrador.
Purple bladderwort is actually just one of three bladderworts with lavender flowers. Florida purple bladderwort (U. amethystina) is confined to a few counties in Collier and Lee Counties in extreme southwest Florida while lavender bladderwort (U. resupinata) , also found statewide, is distinguished by an upcurving lower lip.  The plants photographed here were observed in shallow water at Kissimmee Prairie Preserve State Park.
Purple bladderwort spreads across the open water by forming a network of below-water stems. The light purple flowers can occur throughout the growing season. They stand several inches above the water and are about 1/2 inch in length.  The lower lip is accented with a broad yellow and white splotch and a deeper purple splotch is evident on the upper petal.
Though bladderworts are interesting plants, they don't lend themselves to nursery propagation. None of the 14 native species are currently offered by nurseries affiliated with the Florida Association of Native Nurseries (FANN) and I am not aware of them ever offering any of these plants. Look for it in shallow water habitats, but you'll have to look closely as its small size sometimes makes difficult to see. 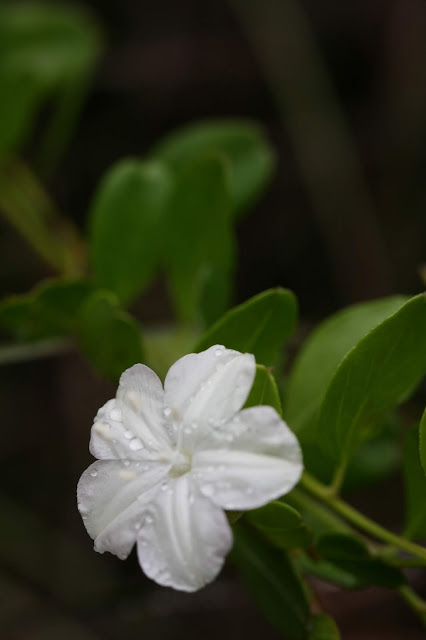 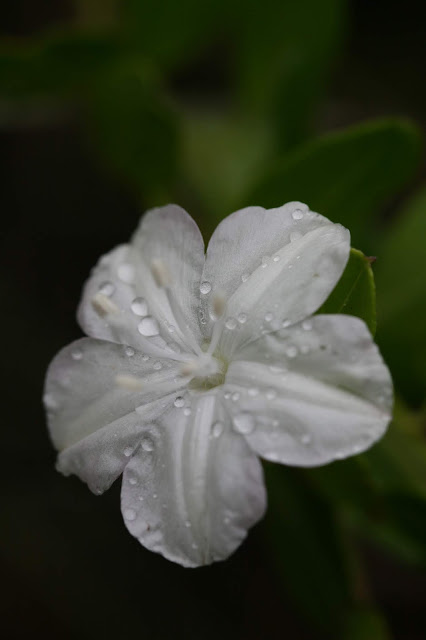 The genus Jacquemontia commemorates French botanist and explorer Victor Jacquemont and includes 5 species native to Florida. All of these, except J. tamnifolia are restricted to extreme south Florida and are listed either as state Threatened or Endangered species. Pineland jacquemontia (J. curtissii) is one of these and is only reported from 5 counties at the tip of the peninsula in calcareous open pinelands and prairies. The plants photographed above were found in pine rockland habitat in Everglades National Park in late May.

Although a few members of this genus are routinely offered for sale by members of the Florida Association of Native Plant Nurseries (FANN), this one is not - regrettably. The 3/4-inch diameter white flowers are exceedingly attractive and are of interest to various pollinators. These blooms can occur year round. Like other members of this genus, it grows as an evergreen twining vine that rambles through the adjacent vegetation. Each stem will extend several feet from the main growing point. The leaves are elliptical in shape, alternate along the stem, and are 1/2-1 inch in length.

Pineland clustervine could be relatively easily grown in a home landscape given a bit of extra moisture and full sun to mostly sunny conditions. It would be an attractive plant if grown on a trellis or allowed to ramble through a mixed wildflower planting.  Until someone propagates it, however, it is best simply admired if encountered along a nature trail. As a state-protected species, it is not legal to collect seed or cuttings.


Posted by Hawthorn Hill at 8:43 AM No comments: