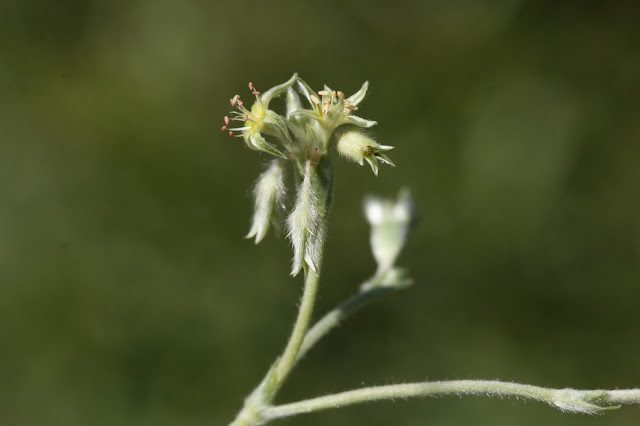 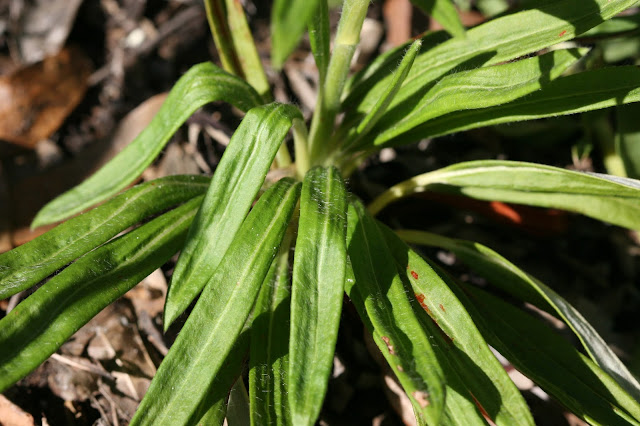 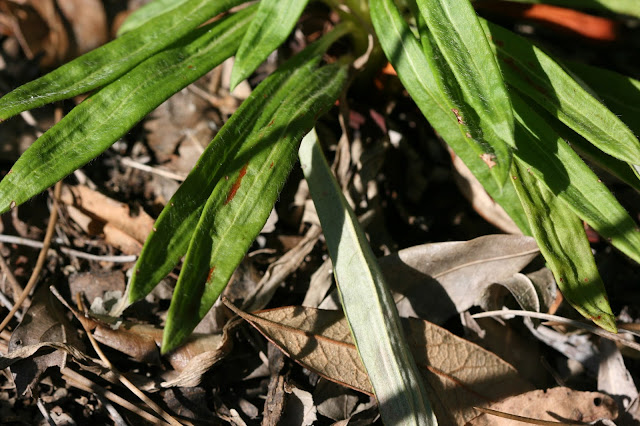 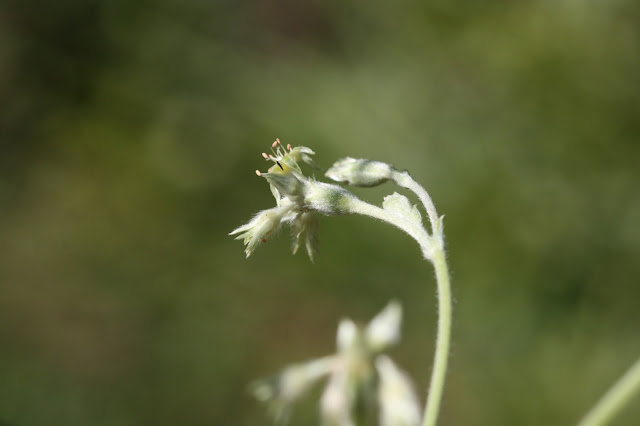 Scrub buckwheat (Eriogonum longifolium var. gnaphalifolium) is a very rare endemic species, found only within the scrub and sandhill habitats of Florida's central ridges - from Ocala National Forest south to the end of the Lake Wales Ridge. It listed as threatened by both the state and federal government.
Scrub buckwheat is a perennial forb that generally maintains its linear basal leaves through the winter. These leaves are 6-8 inches long, deep green in color and slightly "hairy" on the upper surface. Like its close (and much more common) cousin wild buckwheat (E. tomentosum), the undersides of these leaves are densely silvery hairy. The third photo from the top shows this.
A central flower stalk is produced in the center of this basal rosette of leaves and it can appear almost anytime from early summer to fall. Flowering is sometimes stimulated by fire, but it is not necessary. The plant above is in my landscape and began blooming in late October - without fire. The flower stalks reach 2-3 feet tall prior to the flowers opening. It is multi-branched near the top. Each branch contains 10-20 small silvery white flowers  with a yellow center. The flower stalk, flower buds, and the undersides of the sepals are covered by silky silver "hairs".
Though rare in nature, scrub buckwheat is uncommonly offered by native nurseries affiliated with FANN - the Florida Association of Native Nurseries. It is not an especially showy addition to a scrub/sandhill wildflower garden, but it is interesting - especially if planted in small clusters. To date, our single plant has done well in sandy soil in nearly full sun that also has various Conradina's and other scrub plants around it. In the spring, before flowering, it can be confused with wild buckwheat as both have linear leaves arranged in a rosette, with silvery undersides. If you find scrub buckwheat, do not collect seed, but simply admire it for its uniqueness.
Posted by Hawthorn Hill at 8:02 AM No comments: 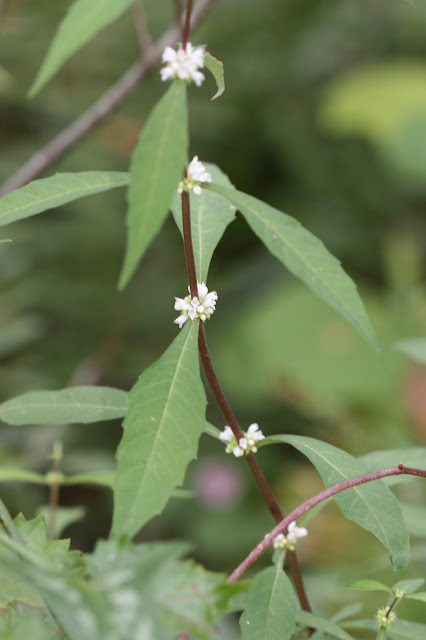 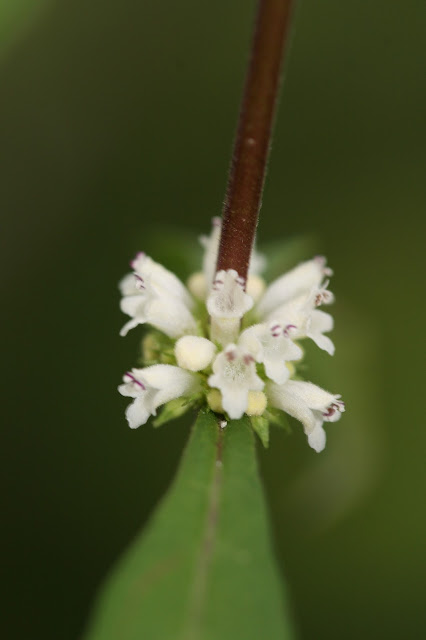 Water hoarhound (Lycopus rubellus) is one of four hoarhounds/bugleweeds native to Florida, and the only one widely found south of the Panhandle. It is an herbaceous perennial that dies back to the ground in winter and reemerges in the spring. As their common name suggests, all four species are obligate wetland species - resident to freshwater swamps, marshes, bogs, and wet shorelines.
Water hoarhound eventually reaches a mature height of about 3 feet. It produces many single stems off its spreading system of underground rhizomes, so when you find it, it normally is present in clusters or in mass depending on the openness of the habitat surrounding it.  As this is a mint, the stem is square. It also is slightly "hairy" and a deep maroon red in color. The leaves are opposite on the stem, normally sessile (without a petiole), and elliptical in shape. The edges have distinctive teeth.
Blooming occurs from summer into late fall. The small white flowers are produced in the leaf axils in clusters. Individual blooms last just a few days, but each cluster produces more over a several month period. Each bloom is about 1/4 inch long and somewhat tubular; the five petals are mostly fused.  The anthers are purple and the throat has several tiny purplish dots, making the flowers appear somewhat pinkish from a distance. They are pollinated by small bees and butterflies.
Water hoarhound can be commonly encountered in the wet areas of Florida, but overlooked when not in bloom. It is not currently being propagated and is unlikely to be in the future as more-showy wetland species are the ones in demand for landscape purposes.
Posted by Hawthorn Hill at 8:25 AM No comments: