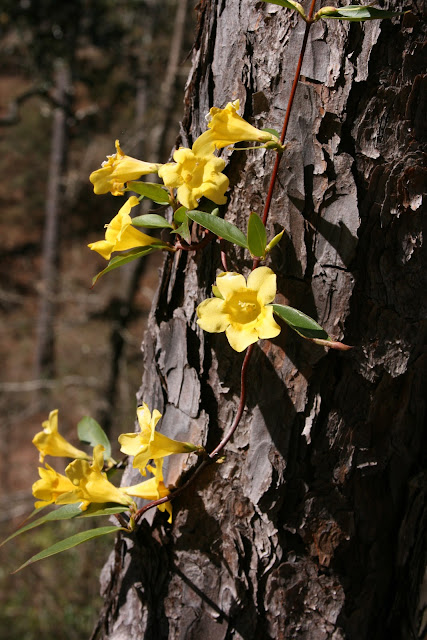 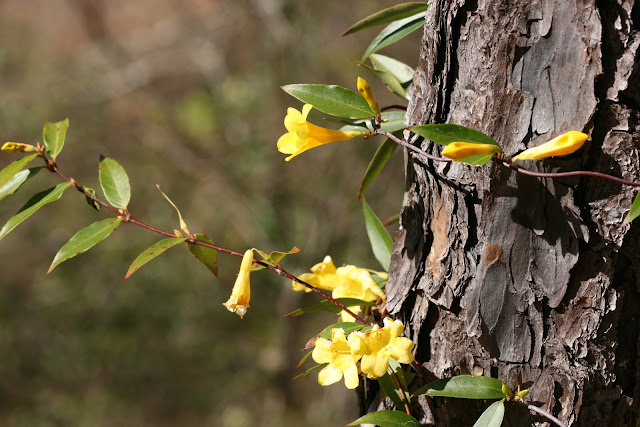 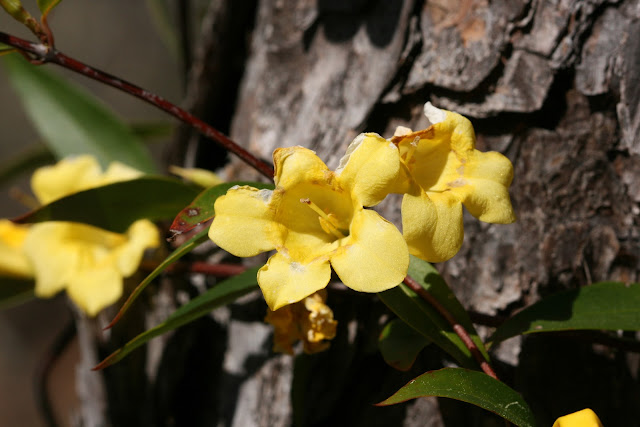 ﻿
Yellow, or Carolina, jessamine (Gelsemium sempervirens) is one of the most familar native vines to those of us that use natives in our landscape.  It is found nearly statewide in a wide variety of upland conditions, from pinelands to scrub.  It also is found throughout the Southeastern Coastal Plain from Texas to Virginia.
As its Latin name implies, it is evergreen. It is a twining vine and it grows a great many feet in all directions from its central growing point.  Often, it grows up and over the adjacent vegetation, and can climb quite high into the canopy of trees.  In more xeric conditions, it sometimes grows more like a ground cover. The elliptical leaves are opposite each other on the stem.
Blooming occurs in late winter to early spring, though it is sometimes possible to see flowers at other times of the year.  They are a bright canary yellow and highly fragrant.  It is often easy to detect the presence of yellow jessamne well before it is seen.  The flowers attract a wide variety of pollinators, including hummingbirds. The pollinated flowers ripen to dry seed capsules.  The seeds have a prominent wing along the outer edge, a feature not present in its close cousin, swamp jessamine.
Yellow jessamine is widely propagated and normally easy to locate from commercial sources, even ones that don't specialize in native plants.  It is quite adaptable and will tolerate a wide variety of sites as long as it is not kept too wet.  As a vine, it will tolerate shade if allowed to grow up into the canopy of nearby trees. It also does well in full sun.  I believe that yellow jessamine is best used on a trellis or fence where its bright yellow, fragrant, flowers can be admired.  If used as a ground cover, it often becomes a tangled mess that is very difficult to walk through. If planted near the base of a tall tree, it will venture up into the canopy, but the flowers cannot be easily seen or smelled.
The one drawback to this species is that it tends to sucker.  In a more formal landscape, it should be placed in a setting where the suckers can be controlled by judicious pruning. If used in a naturalistic setting, it will spread and will be difficult to control. But, in such a setting, control may not be needed.
Posted by Hawthorn Hill at 9:21 AM 6 comments: 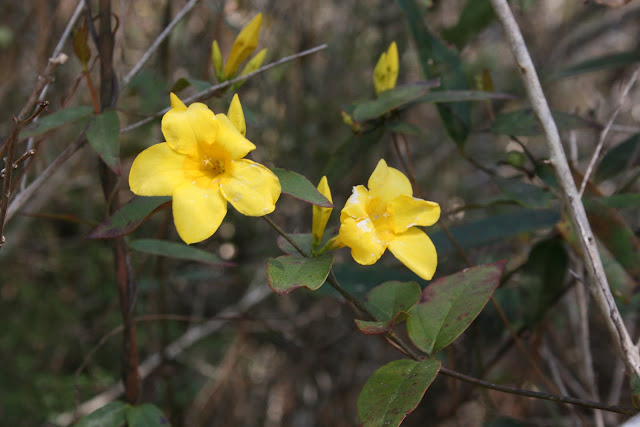 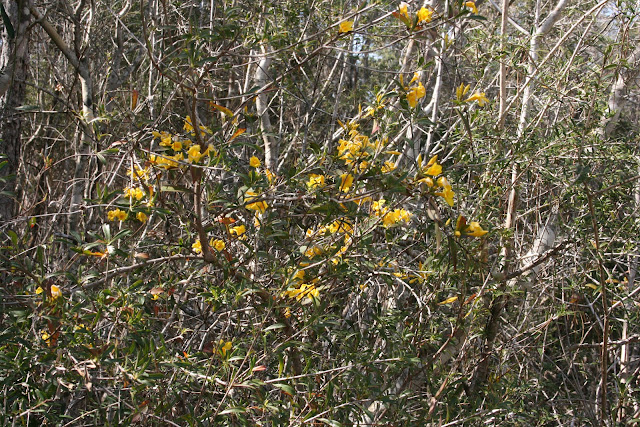 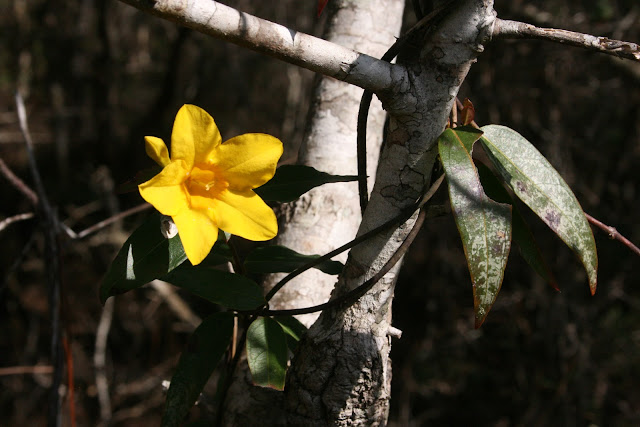 Swamp, or Rankin's, jessamine (Gelsemium rankinii) is a wetland version of the more ubiquitous yellow jessamine (G. sempervirens). In fact, the two species would be very difficult to tell apart were it not for the types of habitat they occur in.  Swamp jessamine is a wetland specialist and occurs in bogs, acid swamps and floodplain forests.  Yellow jessamine is most often encountered in dry uplands.  There are other noticeable differences if you catch the plant in flower or seed.  Swamp jessamine is not fragrant.  The seeds do not have noticeable wings, like yellow jessamine does, and the calyx (the old sepals of the flower bud) persists on the base of the fruit.
Swamp jessamine is the only jessamine you might encounter in a swamp.  This is a north Florida species and is present only in the Panhandle counties as well as Hamilton and Nassau Counties along the Georgia border.  It also occurs in the states of the Southeast Coastal Plain - from Louisiana to North Carolina.
Like its close cousin, swamp jessamine is an evergreen vine without tendrils. It climbs throughout the adjacent vegetation by twining up and over it.  The lanceolate leaves are opposite each other on the stems.
Blooming occurs in late winter/early spring.  These photos were taken on March 8 in Tate's Hell State Forest, Franklin County.  The blooms are a rich yellow, but without the characteristic fragrance that makes yellow jessamine so spectacular as a home landscape plant.  Despite this, they are visited by much the same pollinators.
Swamp jessamine has not been offered by nurseries associated with FANN - the Florida Association of Native Nurseries.  I do not have experience with it in my landscape and do not know how adaptable it might be to non-wetland conditions or regions of the state outside its natural range.  This is a beautiful wildflower for wetland sites in north Florida.  For other situations, yellow jessamine is a better choice.
Posted by Hawthorn Hill at 8:54 AM 1 comment: