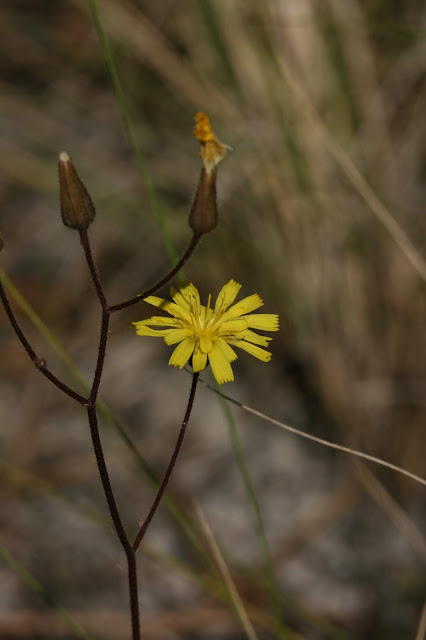 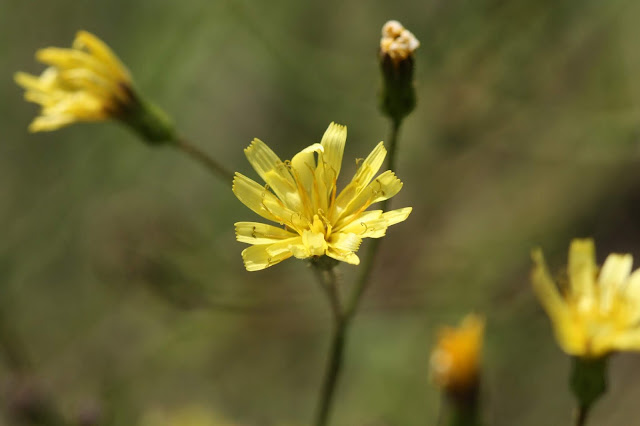 Coastalplain hawkweed (Hieracium megacephalon) is one of many such Asteraceae members that get mistaken for dandelions.  It is not one, of course, and is the sole member of this genus found in Florida.  It is found nearly statewide here, but is not an endemic as it also has been vouchered in Georgia.
Some might also call this a "weed", and it fits that description a bit since it is common in a wide variety of upland habitats and tends to reseed well into disturbed areas. "Weeds" are not necessarily unattractive or undesirable, however. Coastalplain hawkweed produces showy flower heads that can be up to 1 inch in width. The lemon yellow petals open in the morning and close by mid-afternoon. They attract a variety of pollinating invertebrates.  Flowers can be produced year round in frost-free portions of the state, but elsewhere are visible from spring to late fall.  The stalks are about  18 inches tall when grown in sunny locations.
Coastalplain hawkweed is a perennial forb. The leaves are elliptical in shape and normally 2-3 inches long. The leaves and stems are covered by coarse "hairs".
This is not a species I've ever seen offered by commercial nurseries, but it would be easy to propagate from seed. As mature seed is available most months, collect a few from sites where this would be legal, and sow them slightly below the soil surface. Just realize that it is likely to spread once established.

Posted by Hawthorn Hill at 9:23 AM No comments: 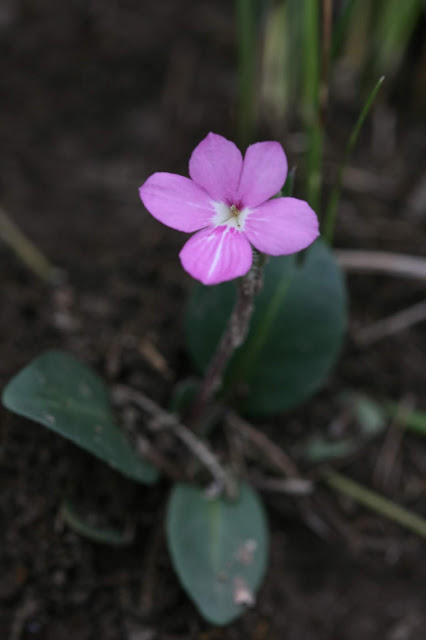 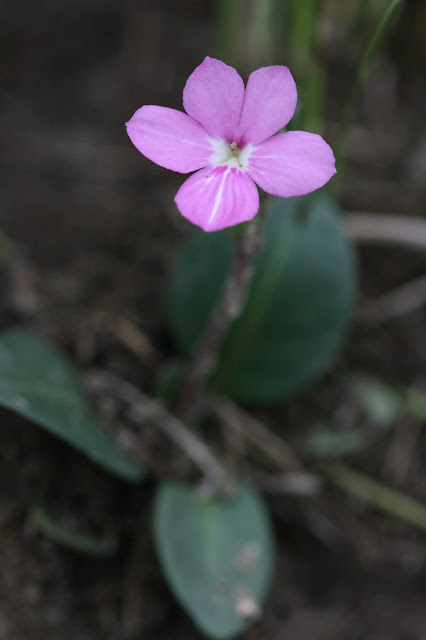 Pineland pinklet (Stenandrium dulce) is a low-growing perennial wildflower reported from most of the southern half of peninsular Florida. It also has been reported from Georgia and Texas as well as much of Central and South America to Chile.  Throughout its range, it prefers moist open habitats such as seasonally wet savannas and pinelands.
Pineland pinklet is diminutive in stature. Normally its ovate to somewhat linear leaves hug the ground as a basal rosette. They are deep green in color and somewhat fleshy. Flowering in south Florida can occur in most months, but is limited to summer and fall further north.  The flower stalk typically stands 3-4 inches in height and the deep pink blooms measure about 1/2 inch wide. The center is white and some white streaking may occur on the 5 petals.  As its Latin name implies, they are sweetly fragrant.
Currently, few south Florida native wildflowers are being propagated by members of FANN - the Florida Association of Native Nurseries. To me, the reason is unclear as most of the endemic and locally native woody species have found their way to market. Pineland pinklet would seem to be a wonderful wildflower for cultivation. Its low stature and beautiful blossoms would make it an ideal candidate for the outer border of a wildflower planting. It also is a reliable reseeder and spreads in sunny moist locations where it is most comfortable.  Regrettably, I rarely see it offered and none of the nurseries associated with FANN - the Florida Association of Native Nurseries, currently list it for sale. Hopefully, this will change soon as more demand for south Florida wildflowers (and wildflowers in general) increases.
Posted by Hawthorn Hill at 1:17 PM No comments: 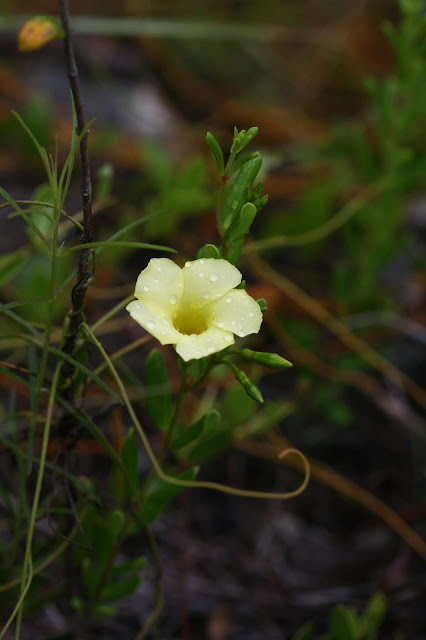 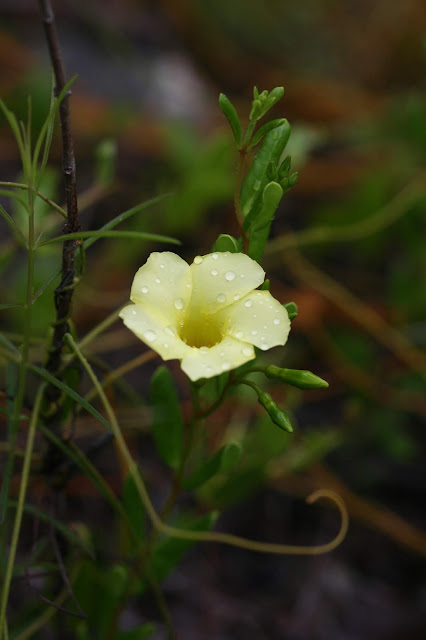 Pineland alamanda (Angadenia berteroi) is a distant cousin to the commonly propagated wild alamanda (Pentalinon luteum). Both are in the dogbane family (Apocynaceae), but the latter is a robust vine while the former is a vine-like herbaceous perennial  Pineland alamanda is a state-threatened species found only in Miami-Dade County and the Florida Keys. It also occurs in much of the Caribbean. Throughout its range, it occurs in open pinelands.
Pineland alamanda can reach a total length of 30 inches tall, but is often much shorter. The leaves are opposite on the stem, linear in shape and curl under along the leaf margins. They also are 1-2 inches long. It is reported that the sap of this plant can cause minor skin and eye irritations.
Flowering can occur throughout the year. This plant was photographed in late May in Everglades National Park in open pine rocklands. The flowers are similar to wild alamanda, but are much smaller in size. Each bloom is about 1 inch long and about 1/2 inch in width. They are a bright canary yellow in color and they attract a variety of pollinators.
Although state listed, this species is often locally common. Although wild alamanda is relatively common in cultivation, pineland alamanda is not. Currently, no one associated with the Florida Association of Native Nurseries (FANN) is listed as propagating it. This is regrettable as it has much to offer the home landscape in south Florida - where so few other wildflowers are being grown. It can be hoped that this situation will someday be rectified and this species, among so many others, will be made available.
Posted by Hawthorn Hill at 12:55 PM No comments: 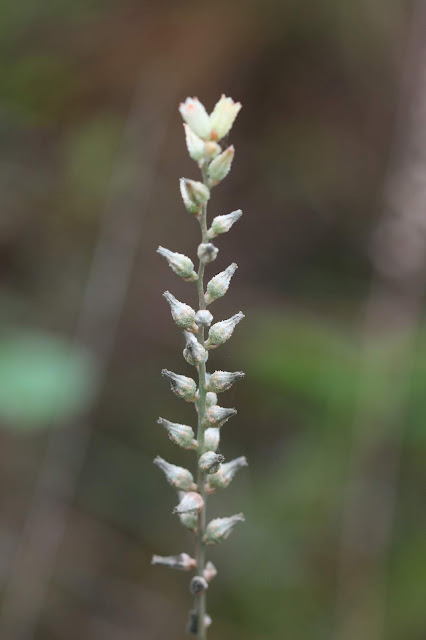 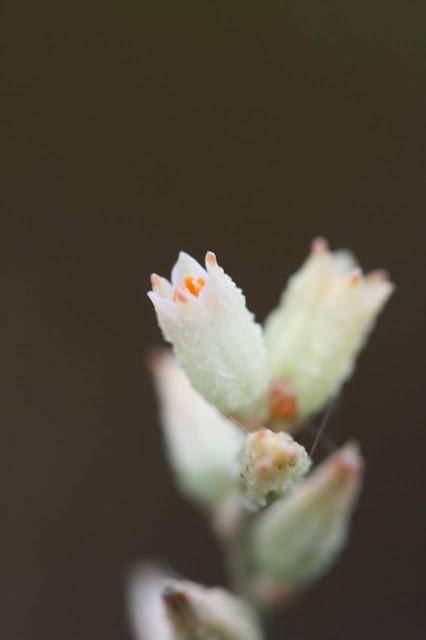 Southern colicroot (Aletris bracteata) is a state-endangered species reported only from Miami-Dade and Collier Counties in extreme south Florida. It also is reported from parts of the Bahamas. Throughout its limited range, it occurs in pine rockland habitat where the soils are intermittently wet and in sunny locations.  The plants photographed above were found in May 2018 in Everglades National Park.
South Florida ecologist, Roger Hammer, reports that it can bloom throughout the year, but I have very limited experience with this specie's ecology.  Like other members of the genus, it is a perennial herb with thin leaves that emerge as a whirl from a central growing point. Each wiry leaf is less than 1/4 inch wide and may be up to 4 inches long. As the Latin name implies, the flowers are subtended by small leafy bracts.  The stalk itself can be up to two feet tall and the white flowers arise on the upper 12-18 inches. They bloom from the bottom up. Each is about 1/4 inch long and "mealy" in appearance.
This is one of five colicroot species native to Florida and the one with the most-limited distribution. None of them are currently offered commercially by members of FANN - the Florida Association of Native Nurseries.  It is very unlikely that this one will ever be a serious candidate for the home landscape. If you hike any of the pine rocklands within its range, however, look for it and admire it for its distinctiveness.
Posted by Hawthorn Hill at 12:34 PM No comments: