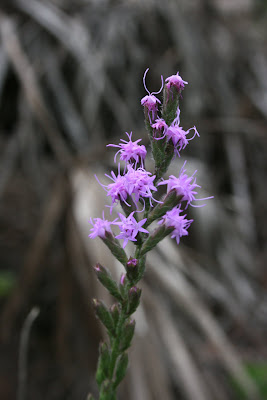 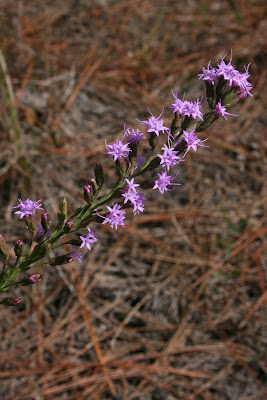 Garber's blazing star (Liatris garberi) is restricted nationally to the southern half of the Florida peninsula, though it also occurs in the Bahamas. This is a species of moist open habitats and it is most common in the understory of wet flatwoods.

Garber's blazing star shares many of the characteristics of the genus. It overwinters underground and re-emerges in the spring as a basal rosette of grasslike leaves. In the early summer, it begins to send its flower stalk upward. Blooming occurs in late August and early September on flower stalks that rarely stand taller than 2 feet. The stems are slightly "hairy" and the flower buds are held away from the main stem by short stalks. Each bud contains less than 10 rich lavender flowers.

What distinguishes Garber's blazing star from others is its early blooming time, its adaptation to moist soils, and its finger-like corm. While other blazing stars have rounded corms that look like a typical bulb, Garber's is decidedly finger-like with at least three "fingers"; sometimes more.

Garber's blazing star is well-behaved in the garden. Because of its shorter stature, it is not prone to falling over like many of the taller species. Its small size allows it to fit nearly anywhere, but it is best used near the front of the planting bed or near walking trails so it can be easily admired.

Hawthorn Hill has recently added this species to its collection of Florida blazing stars and is propagating it for the homeowner market. Let us know if you are interested.
Posted by Hawthorn Hill at 1:26 PM