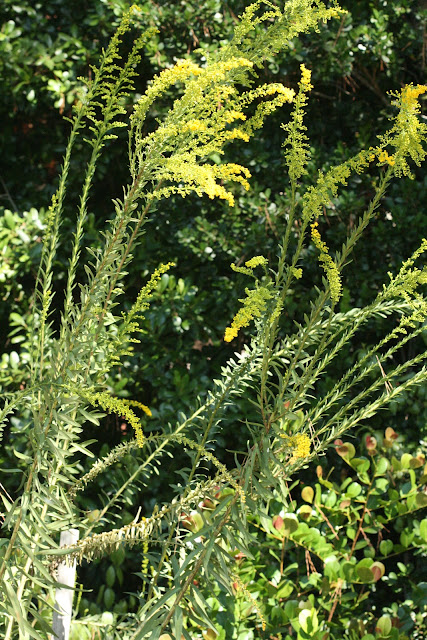 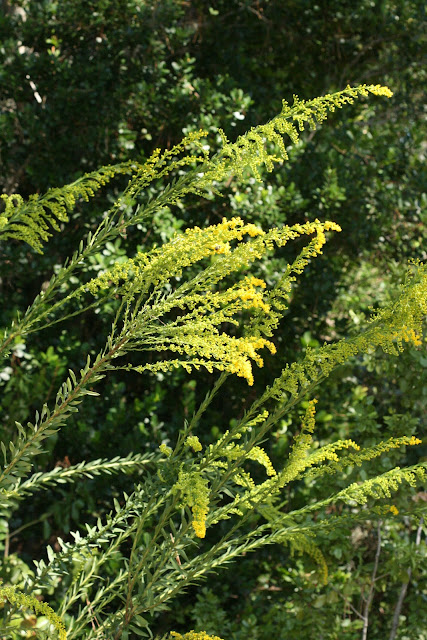 Seaside goldenrod (Solidago stricta) is one of 20 goldenrods native to Florida and extremely common along our coastal dunes and the edges of salt marshes in counties throughout Florida.  It is not confined, however, to coastal habitats and can be found also in a number of interior counties in upland sites with well-drained soils.
As its Latin name suggests, it is evergreen, but most of its above-ground stems do, in fact, die back in winter; leaving only a cluster of long, elliptical basal leaves.  Seaside goldenrod grows rapidly in the spring and summer months and produces a main stalk that reaches 8-9 feet in length.  As such, it is the tallest of our native species and a dominant component of whatever landscape it occurs in.  The pointed leaves go all the way to the top of the stem, but are greatly reduced in size from those at the base of the stem.
Flowering occurs in fall; October- November.  The flower heads are loose open panicles and, like most members of this genus, the individual flowers are small and bright yellow.  Migrating monarchs pay special attention to these blooms as they move down the coastline in late fall, but a wealth of other pollinators use them also.
Seaside goldenrod is widely available from commercial sources and is frequently planted in home landscapes.  This is a good choice for large open areas, for coastal plantings, or as a screen to block out neighboring landscapes, but it is not the best goldenrod for smaller planting beds as it is just too overwhelming.  Unlike most members of this genus, seaside goldenrod does not produce suckers, but it does spread by forming offshoots from its main base.  Over time, it forms large masses.  Plant it no closer than 12 inches apart and keep it from spreading by judicious weeding in the late winter or early spring.  It mixes well with large coastal grasses, such as seaoats, but not with most other wildflowers. This is an extremely adaptable species that can be used in nearly any setting except deep shade.
Posted by Hawthorn Hill at 5:27 AM