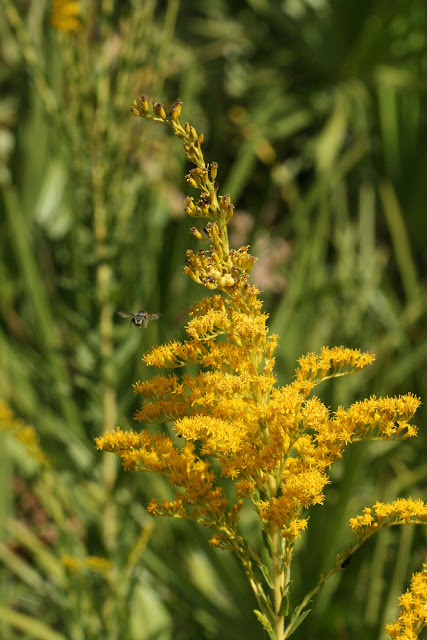 There is no better harbinger of fall than goldenrods (Solidago spp.). Their bright yellow blooms can be spectacular and their generally robust nature makes them stand out wherever they occur.  These blooms are excellent nectar sources for pollinating insects.  No garden should be without at least some goldenrods for the bees and butterflies.
Florida has 19 unique species (plus two distinct varieties of one species, Solidago odora), and one species or another can be found in pretty much every habitat type throughout the state.  The problem with this diversity is that the individual species are often difficult for the average person to identify.  Most all of us are simply content to know its a goldenrod and leave it at that.  But, eventually the underlying urge to accurately name it rears its ugly head.
In the next series of posts (and over the next couple of weeks), I will attempt making them a bit easier.  Identifying individual species requires you to look at the whole picture.  It is not enough to simply look at part of it.  Often it's a combination of key characteristices that will enable you to know for certain which species you are looking at.  The most important things to notice are:
1. Habitat - Where is it growing?  Different species tend to be most often encountered in distinct habitat types. Knowing which species are most likely to be encountered where will often limit the number of species you have to sort out.
2. Blooming Season - Though most species bloom in the "fall", even that is protracted over several months.  Some goldenrods, like S. odora, are most likely to flower in the summer and some fall blooming species are most likely to bloom in early fall while others flower most commonly very late in the season. If you watch goldenrods, you may notice that there is a progression of bloom times among them.
3. Leaf Shape - Though there is always some variation within species, most goldenrods have fairly distinctive foliage.  I will try to post good photos of each of the species I have good photos of.  What is difficult to show well is the relative size of the leaves to each other.
4. Shape of the Flower Head - While many goldenrods have a loose panicle of blooms that fall away from the main stem in all directions, many others are very distinctive.  Even the "loose panicle" types are different and could be told from each other if the species were side by side...  Of course, that doesn't happen much in nature, but after some practice you will get an eye for telling them apart this way.
5. Degree of  Suckering - All goldenrods sucker.  Their root systems send rhizomes out from the main plant and these produce more stems, but not every species suckers aggressively.  Some, like the pinebarren goldenrod (S. fistulosa) (photo below shows extensive suckers of this species), produce so many suckers that they soon develop an almost monoculture of stems in well-defined patches.  Others, like Chapman's goldenrod (S. odora var. chapmanii), send far fewer suckers out and individuals are often fairly widely spaced in the landscape.
6. Relative Height - Some goldenrods, like seaside goldenrod (S. sempervirens) are giants and can reach heights well over 6 feet, while others, like wand goldenrod (S. stricta) are diminutive in comparison; standing only about 2-3 feet with their flower stalk.  Knowing the extremes and which ones fall in the middle can often help narrow the field down when trying to make an identification. 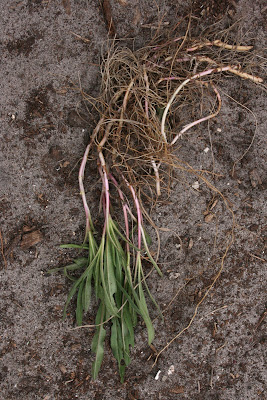 Very few of our many goldenrods are widely propagated for the home landscape, but there is some evidence that this is changing as the public comes to understand the genus a bit better and looks for some of the better species for landscape settings.  So - stayed tuned for my future posts on the individual speces - and start to look for them as our summer turns to fall and winter.
Posted by Hawthorn Hill at 9:25 AM