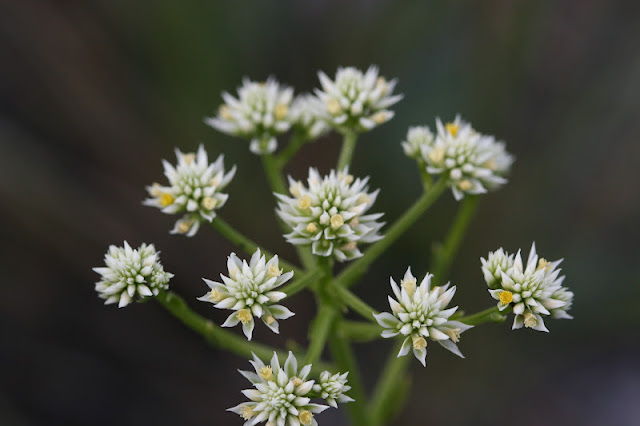 Baldwin's milkwort (Polygala balduinii) is one a just a few white-flowered milkworts native to Florida and the only one with flowers arranged in small circular heads.  This is a wetland species and it occurs nearly statewide.  Its geographic range is limited to the Deep South - Florida to Texas, along the Gulf of Mexico.
Baldwin's milkwort is an annual or biennial, though Roger Hammer lists it as a perennial in his Everglades Wildflowers book.  It emerges in spring and rapidly reaches its mature height of 1-2 feet by early summer.  This species is not much of a foliage plant.  Narrow elliptical leaves mostly disappear by blooming season - leaving only a few sessile leaves along the stem.
Flowering occurs in early summer and can last for several months.  In extreme south Florida, flowers can be found in most months.  The erect stem produces up to a dozen rounded clusters of bright white blooms in a cyme arrangement.  The form looks a bit like several yellow-flowered species, especially P. ramosa and P. cymosa, but no other species like it has white flowers.
Because of its short-lived nature and its wet soil requirement, it is unlikely that Baldwin's milkwort will ever be offered by commercial nursery sources, though it is a very handsome plant.  Look for it in open sunny wetlands beginning in June.  It is likely to occur in colonies if you find it.
﻿
Posted by Hawthorn Hill at 3:41 PM