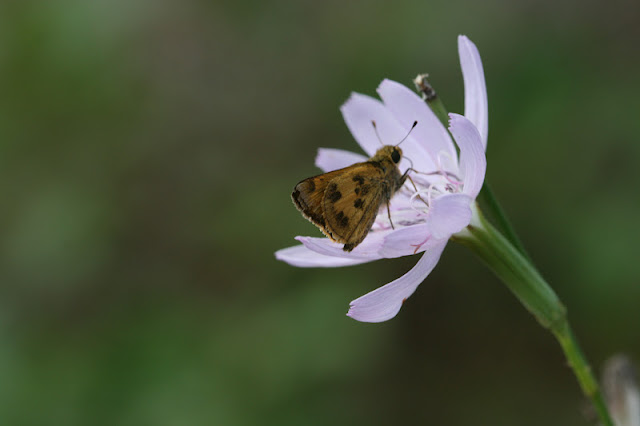 Roserush (Lygodesmia aphylla) is a member of the aster family and found throughout much of Florida except the extreme western Panhandle and the lowest tier of south Florida counties. It is a near-Florida endemic; found outside the state only in Georgia.  Throughout its range, it occurs in well-drained upland habitats - often in areas with some disturbance.
Roserush is a perennial herbaceous wildflower that dies back to the ground in late fall. As its common name implies, it loses its basal leaves quite early in its annual growth cycle and spends much of the year as a single stalk with very reduced leaves along the stem. By early summer the single stalk may reach a mature height of 24-36 inches.
Flowering occurs atop the main stem in summer, sometimes into fall.  A single flower is produced at one time, but each stalk may produce more than one bloom by producing short side stems. These flowers are quite attractive, being lavender pink in color and nearly 1 inch across.  Like most asters, they attract a wide diversity of pollinating insects and last for several days.  Eventually, the flowers fade and go to seed.  The fluffy white seed heads send the seeds off in the breeze to germinate well away from the parent plants.
Roserush has never been commercially propagated by any nursery I am aware of associated with FANN - the Florida Association of Native Nurseries, and it is unlikely to be.  This wildflower is not much to look at when not in flower and it would be a tough sell to anyone other than someone already committed to purchasing it.  Despite this, we at Hawthorn Hill have grown roserush in the past by request and could again in the future.
This species looks best if planted in mass - no less than 5 plants in a cluster, and near the front half of a mixed wildflower planting.  Give it space and don't crowd it with other wildflowers or mulch it too heavily.  If provided with well-drained sandy soil and plenty of sun, roserush is not a difficult species to provide for.
Posted by Hawthorn Hill at 8:26 AM