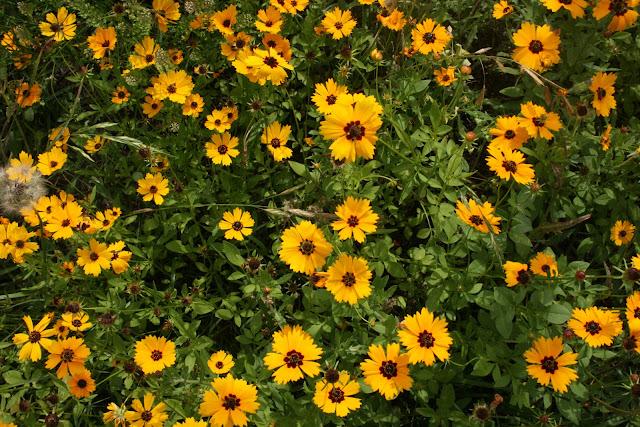 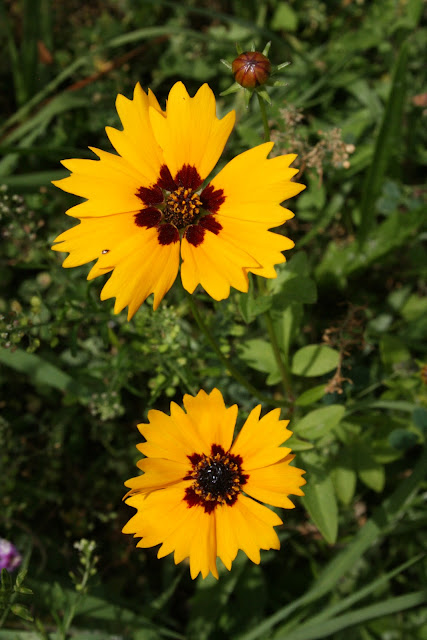 Goldenmane coreopsis (Coreopsis basalis) is the wildflower featured on the state wildflower license plate, but it is not native to Florida.  The state's legislators adopted the genus, Coreopsis, as the state wildflower, not this individual species, and someone apparently decided that this species was the showiest of the group... It's hard to take exception to that as the rich yellow ray petals are beautifully contrasted near the center disk flowers by a deep maroon "V"-shaped pattern.
Goldenmane coreopsis is actually a western wildflower that occurs naturally in plains, pastures and prairies as well as in disturbed areas throughout the Deep South from Texas to the Carolinas.  It is widely planted for the color it lends mixed wildflower plantings. In Florida, it is frequently mixed with other wildflower seed and used for highway beautification projects in north Florida.  The photos above were taken in mid-May in Citrus County.
Goldenmane coreopsis is an annual and persists in open habitats and in places that undergo slight disturbance, allowing its seed to make good soil contact and germinate.  Growth is rapid from early spring and flowering occurs by late spring.  Flowers are produced into mid-summer and the plants wither by early fall.
This is a rather short, broad-spreading species. Most plants reach a mature height of about 12-18 inches, though the flower stalks may stand a foot taller. The plants are 12 inches across and the many basal leaves are deeply dissected.
Goldenmane coreopsis prefers sunny well-drained sites.  It fails rapidly if the soil remains wet for long. I have not had much success with this species at my home in Pinellas County, and suspect it is best used only in the northern 1/3 of the state.
There is some dispute among taxonomists regarding its nativity.  The vast majority do not consider it native, but a few argue that it should be considered native in the far western counties of the Panhandle.  Regardless, it is widely planted on roadsides and, thus, widely encountered. The seed is also available should you decide to add it to your landscape. Just make sure you give it conditions that will allow it to reseed.
Posted by Hawthorn Hill at 9:32 AM