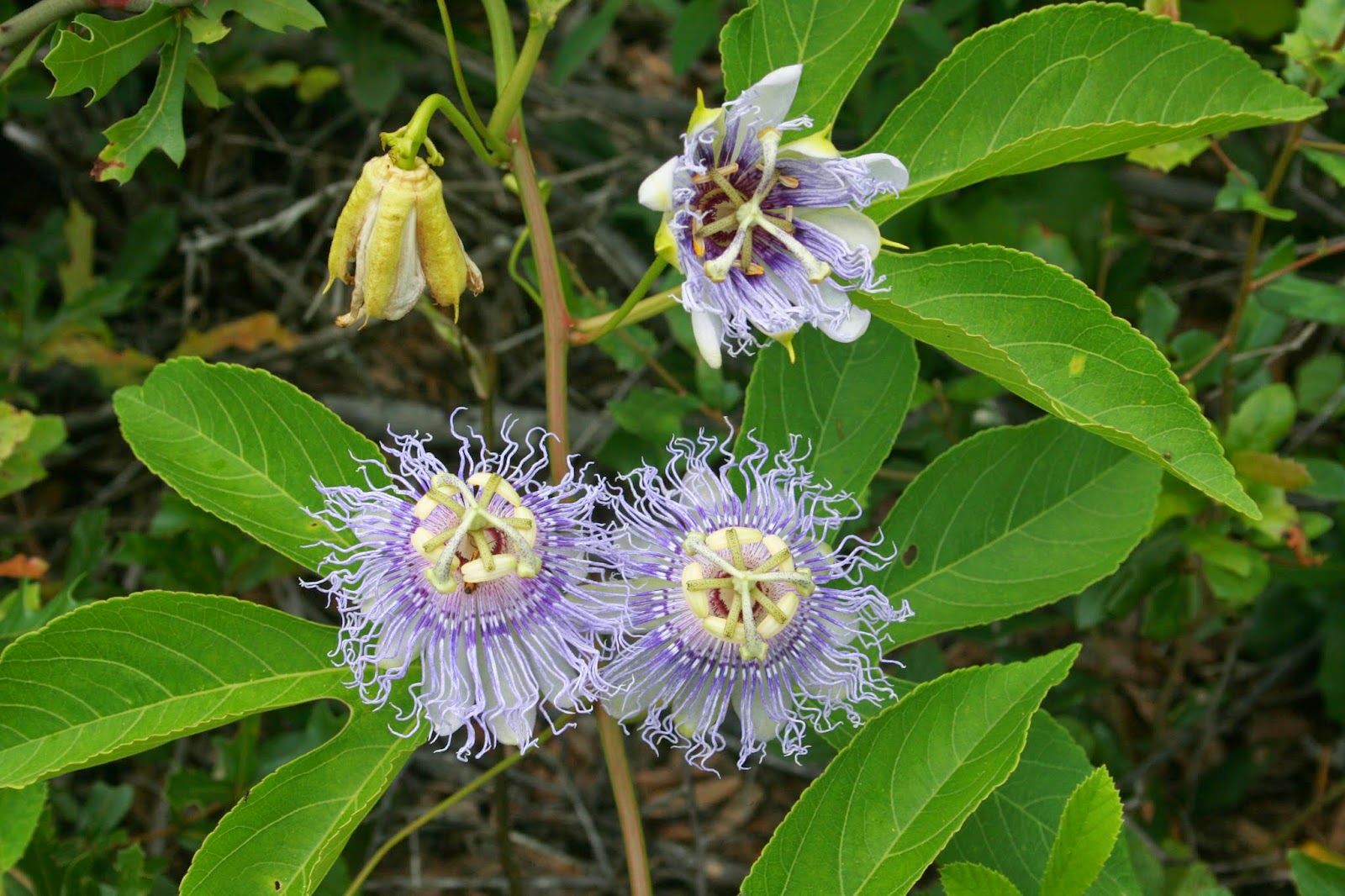 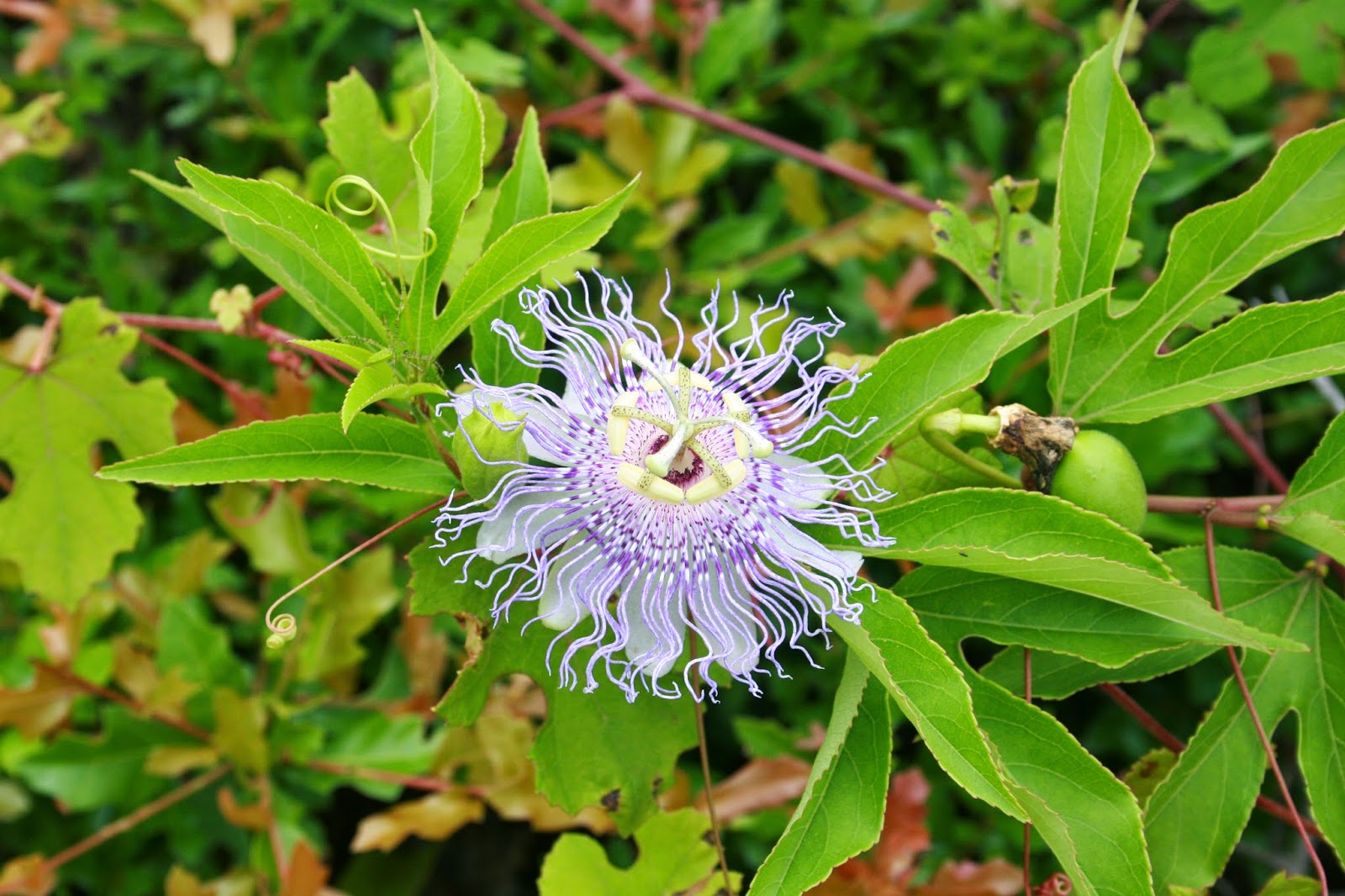 Purple passionvine (Passiflora incarnata) occurs statewide in a variety of upland habitats.  Named by early Spanish missionaries, passionvines supposedly helped tell the story of the "passion" of Christ; the crucifixion story.  The pointed tips of the leaves were taken to represent the holy lance, the tendrils the whips used in the flagellation of Christ, the ten petals/sepals represented the 10 faithful apostles (excluding Peter and Judas), the radial filaments represent the crown of thorns, the 3 stigmas the 3 nails, and the 5 anthers represent the 5 wounds he received.  All a bit of a stretch in modern times, but a useful story model in trying to gain new converts among native peoples.
Purple passionvine is an aggressive vine when grown in favorable conditions.  It produces multiple stems that can exceed a dozen feet in length and the tendrils it produces along the length of each allows it to climb and clamber over all the vegetation it encounters along the way.  Usually, it remains close to the ground and partially smothers low shrubs and herbaceous vegetation. It rarely climbs upwards toward the canopy of trees. Over time, passionvines also sucker and new stems can emerge many feet away from the parent plant.  All of this means that passionvines can be a bit unruly and are best used in a landscape where this will not be a problem.
What makes passionvines wonderful additions to the landscape are their wonderful flowers and the fact that they serve as larval host plants to several beautiful species of butterflies. Purple passionvine is one of the state's showiest wildflowers.  Blooming occurs from early summer to fall. Each light lavender bloom can be 3+ inches across and they are slightly fragrant.  The flowers are mostly pollinated by bumblebees and the pollinated blooms eventually form rounded fruit that become yellowish and wrinkly at maturity.  Inside, the many seeds are covered by a sticky gelatinous flesh that is high in citric acid and quite tasty to eat.
Caterpillars of gulf fritillaries and several heliconias - zebra longwings and julias, feed on the foliage. If your landscape has a lot of butterflies, their feeding can easily keep the foliage in check.  Purple passionvine has leaves with three lobes and no fuzzy hairs - like some of the nonnative purple-flowered species have.
Because of its beauty and utility to butterfly gardeners, purple passionvine is rather widely propagated and should not be too difficult to locate.  In a landscape, however, this species is touchy as to growing conditions.  It requires exceptionally good drainage and high light levels to persist over time.  If kept too moist, especially during the summer rainy period, it will decline and eventually die.  Other passionvines are better for shady and/or moist soils.  I think this species is best used on a trellis where the flowers are best seen and the stems are somewhat confined.
Posted by Hawthorn Hill at 12:16 PM