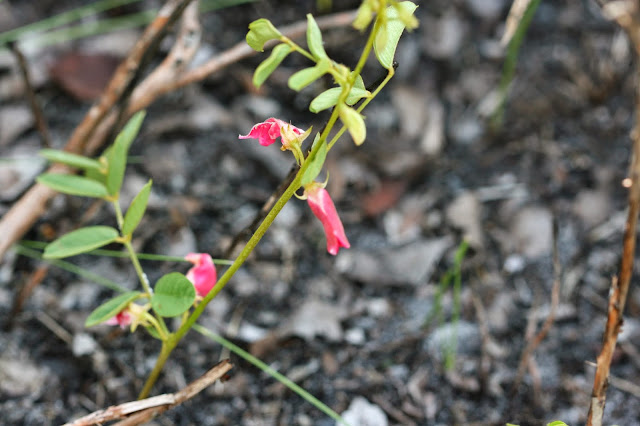 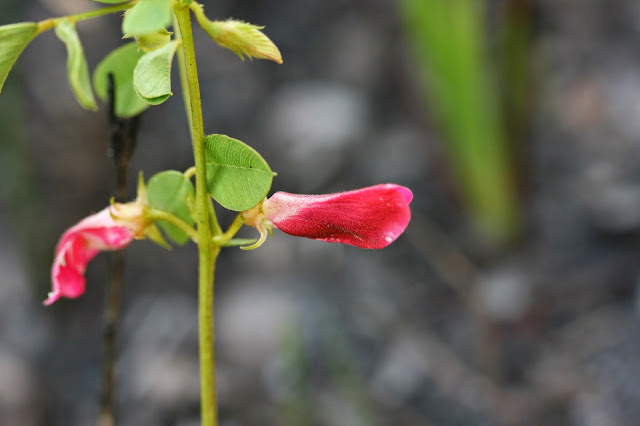 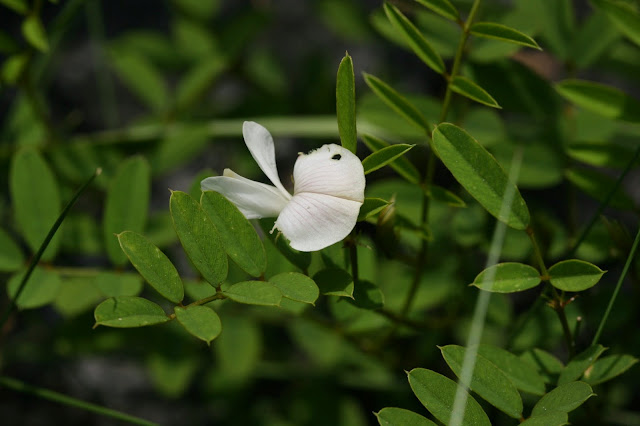 Rugel's hoarypea (Tephrosia rugelii) is endemic to Florida, but found in most counties in the peninsula as well as being reported from Jefferson County.  It is one of eight species found in Florida; a genus that can sometimes be confusing. Hoarypeas are legumes and they share the many characteristics of the family - compound leaves and flower shape, to name two.
Rugel's hoarypea is similar to Florida hoarypea (T. florida) and can be told apart mostly by the length of the petiole - the part of the leaf that attaches it to the main stem.  Rugel's hoarypea has much shorter petioles than Florida hoarypea.  Both species are common in upland well-drained sites and bloom from late spring into fall.  The specimens above were photographed in Kissimmee Prairie Preserve State Park, not in sandhill, but where the water table often rises to the surface during wet summers.
This is a perennial that dies back to the ground in winter.  Its stems are herbaceous and they are upright, though they grow outward more than upward and extend for several feet from the root in many directions.  The compound leaves are comprised of many elliptical leaflets, ending in a sharp point.
The blooms are interesting.  The deep rosy buds open by mid-morning, producing bright white flowers. By late afternoon, these blooms turn rosy once more before closing.  This makes it easy to identify this plant as two separate species, but of course, it is not.
Tephrosias are of great interest to pollinators such as bumblebees and serve as larval food for several butterfly species - including several species of skippers.  None, however, have ever been propagated to my knowledge by any of the native plant nurseries associated with FANN - the Florida Association of Native Nurseries.  Tephrosias, like Rugel's hoarypea would make a useful ground cover within a naturalistic mixed wildflower garden.  Perhaps someday at least one of them will be offered for that purpose.
Posted by Hawthorn Hill at 6:34 AM