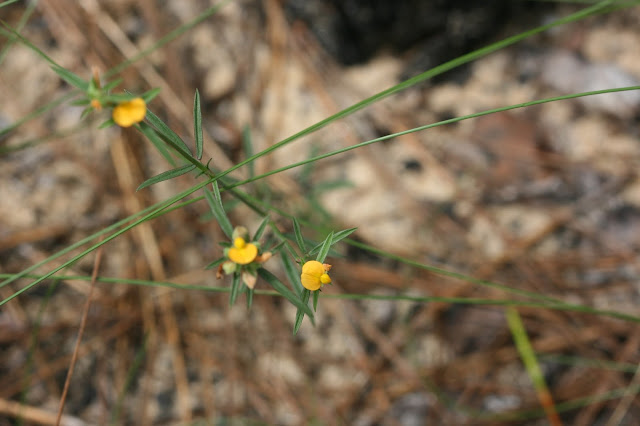 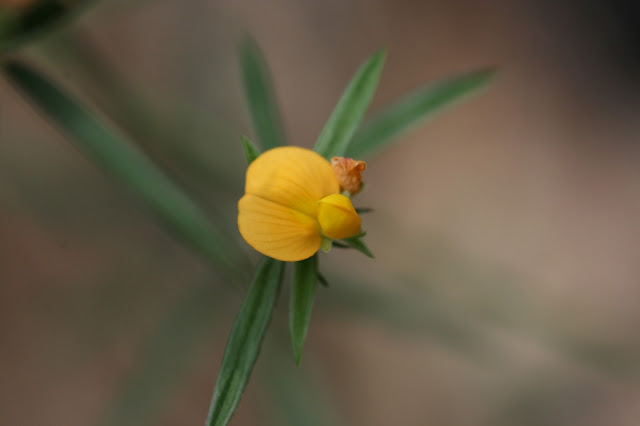 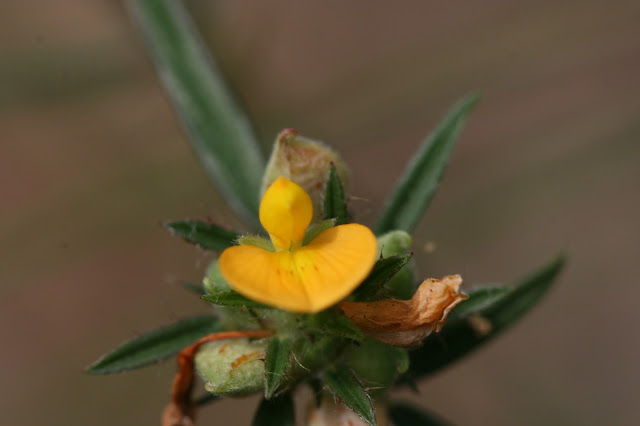 Sidebeaked pencilflower (Stylosanthes biflora) is found throughout much of north and central Florida in well-drained sandy uplands.  The plants photographed above were found in a recently burned longleaf pine sandhill, but it also is resident to dry hammocks, old fields, and roadside edges. This species also occurs in much of the eastern U.S.
Sidebeaked pencilflower is a perennial species that dies back to the ground in winter, unless temperatures remain above freezing.  It can act like a low-growing ground cover or be mostly erect. The plants above are assuming the former aspect. This is a rather diminutive species. Like many other members of the bean/pea family, the foliage is composed of three leaflets. Each is somewhat narrow and less than 1/3 inch long. A close inspection of the leaves shows that they have a few sharp teeth along the margins and stiff "hairs" as well.
Flowering occurs in the leaf axils - either solitary or in small clusters, in summer and early fall. Each bloom is deep yellow to nearly orange with darker lines on the larger "flag" petal. A much smaller fused lower lip is beneath. The flowers are very small, less than 1/2 inch in size. They are pollinated by small bees. The foliage is the larval food source for the barred sulfur.
Sidebeaked pencilflower is currently being propagated by many commercial nurseries, mostly as an alternative to turf. Though not as resistant to repeated foot traffic, it will spread and form a mat over time. Though the flowers are tiny, its additional value to a landscape devoted to butterflies and pollinators makes up for its deficiencies.

Posted by Hawthorn Hill at 9:42 AM