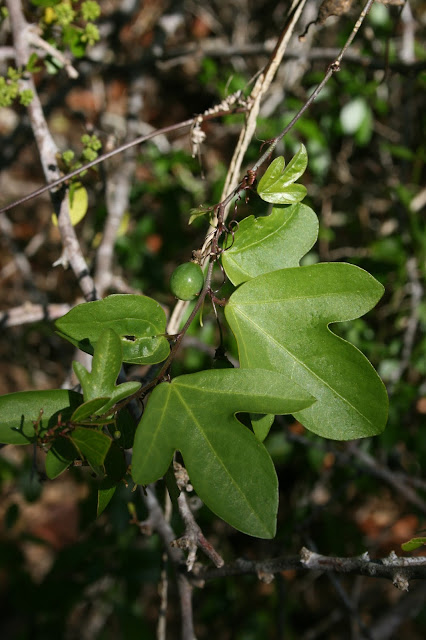 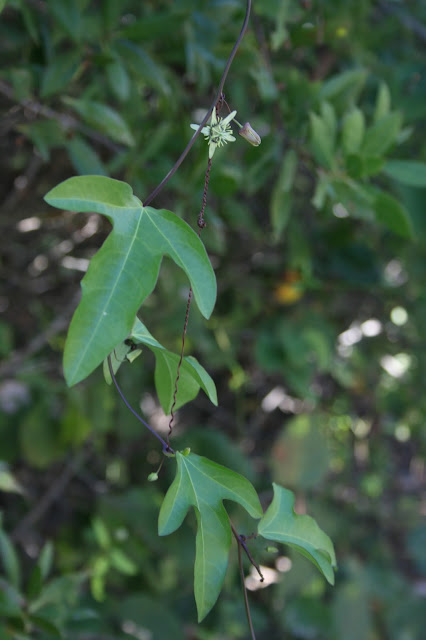 Winged maypop (Passiflora suberosa) is found throughout peninsular Florida in a wide variety of habitats. Though not a showy wildflower (and therefore sometimes overlooked), its presence is often detected by the flurry of butterfly activity around it.  Winged maypop is equally at home in mostly sunny openings as well as mostly shaded woodlands and it is widely distributed by birds into all of these locations as they feed on its small purple fruit.
Named for the corky "wings" along its mature stems (visible in the top photo), winged maypop works its way up and around nearby vegetation - extending a dozen or more feet away from its base. Like other passionvines, it has tendrils that aid its ability to climb securely. The small glossy leaves are variable in shape, but always three-lobed with a deep vein running the length of each.
Flowering occurs from late spring through fall. The tiny pale flowers are typical for the genus, but can go largely unnoticed because of their size. They are pollinated by bees and fertilized flowers form round deep-purple fruit that ripen about a month later. They are about 1/4-1/3 inch long. As mentioned above, they are widely fed on by songbirds and the seed are, therefore, widely scattered as well.
This wildflower would largely be considered an afterthought among wildflower gardeners if not for the fact that it is essential in a butterfly garden. Because it does well in dappled sun, this is the best host plant for the zebra heliconion (aka zebra longwing) in much of Florida. As zebras typically shun sunny areas to lay their eggs, most other passionvines are rarely used by them. The exception is yellow passionvine (P. lutea) which fills this role in the Florida panhandle counties. Winged maypop does well in sunny locations too, and in this setting it serves as a host for the caterpillars of Gulf fritillary and julia butterflies.
Winged maypop is likely to already be in your landscape - or to show up someday unannounced, but it is widely propagated by native plant nurseries if you wish to add it yourself.  I think it does best in average soil where it gets partial sun. If you can introduce it to a location where it can grow in both shady and sunny directions, it will maximize its value as a larval food plant.
Posted by Hawthorn Hill at 9:14 AM